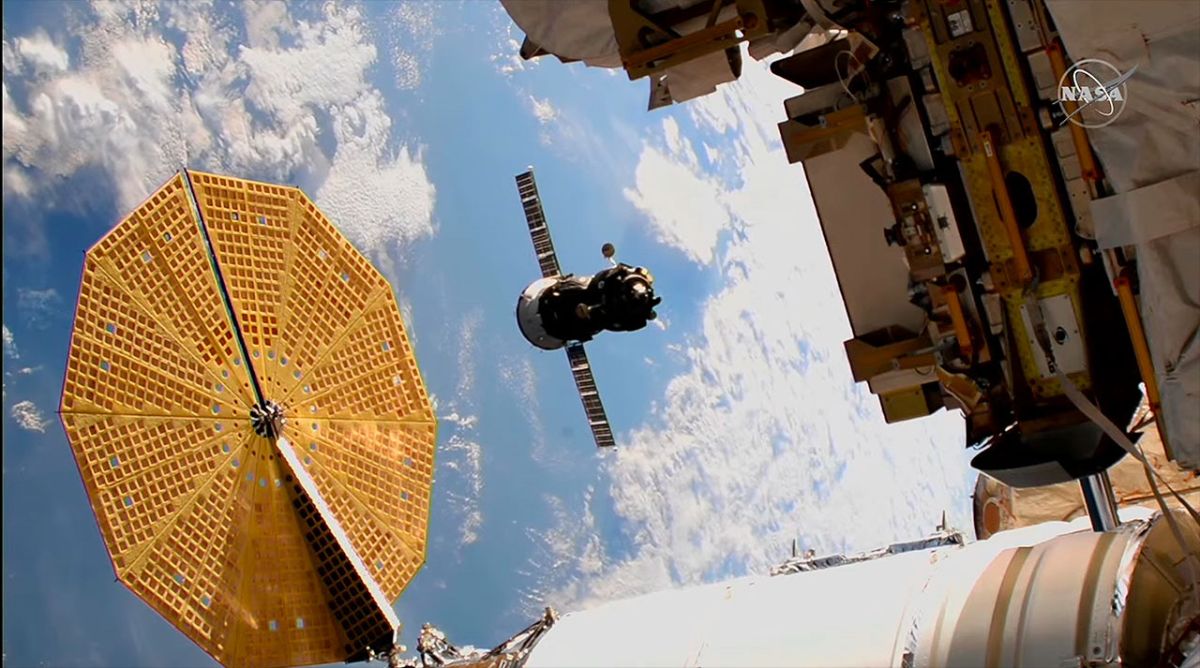 Two Russian cosmonauts and a NASA astronaut took a quick spin around the International Space Station on Friday (March 19), as they relocated their Soyuz spacecraft in preparation for the arrival of the next crew.

“Separation!” Ryzhikov radioed to Russia’s mission control outside of Moscow as the Soyuz left the space station.

Related: How NASA booked a last-minute trip to space on a Russian Soyuz

Russia’s Soyuz MS-17 spacecraft with Expedition 54 commander Sergey Ryzhikov and flight engineer Sergey Kud-Sverchkov, both of the Russian state space corporation Roscosmos, and flight engineer Kate Rubins of NASA, on board is seen from a camera outside of the International Space Station as it is relocated from the Rassvet to Poisk module on Friday, March 19, 2021.  (Image credit: NASA TV)

Backing slowly away from Rassvet at a rate of less than one foot per second (0.2 meters per second), the Soyuz reached a separation distance of about 130 feet (40 meters) and paused while ground controllers and Ryzhikov made sure the Soyuz’s systems were properly configured.

Ryzhikov piloted the Soyuz on a fly-around of the Russian segment of the orbiting laboratory, from nadir to zenith, passing by the docked Progress MS-16 and Progress MS-14 cargo vehicles while maneuvering to the space-facing port of the Poisk Mini-Research Module 2 (MRM 2).

After another brief pause to ensure the Soyuz was aligned with Poisk, Ryzhikov, Kud-Sverchkov and Rubins reconnected with the space staton at 1:12 p.m. EDT (1712 GMT), 34 minutes after undocking.

Russia’s Soyuz MS-17 spacecraft is seen from a camera outside of the International Space Station after docking to the Poisk Mini Research Module 1 (MRM 1). Expedition 64 crewmates Sergey Ryzhikov, Sergey Kud-Sverchkov and Kate Rubins relocated the Soyuz from the Earth-facing port on the Rassvet module on Friday, March 19, 2021. (Image credit: NASA TV)

The relocation of Soyuz MS-17 freed up the Rassvet port for the arrival of another Soyuz spacecraft, MS-18, which will launch three crewmembers for the station’s Expedition 65 in April. Roscosmos cosmonauts Oleg Novitsky and Pyotr Dubrov, together with NASA astronaut Mark Vande Hei, are scheduled to lift off on April 9 from Russia’s Baikonur Cosmodrome in Kazakhstan.

View of the data display aboard Russia’s Soyuz MS-17 spacecraft as it approach a redocking with the International Space Station on Friday, March 19, 2021. Expedition 64 crewmates Sergey Ryzhikov, Sergey Kud-Sverchkov and Kate Rubins relocated the Soyuz from the Earth-facing port on the Rassvet module to space-facing port on the Poisk module. (Image credit: NASA TV)

The Soyuz move was made to keep Poisk open for future spacewalks. The module was used for the first time as an airlock in November 2020. With the MS-17 crew set to depart the space station for Earth on April 17, and docking Soyuz MS-18 at the Rassvet, Poisk will be open to support Russian extravehicular activities.

Soyuz relocations are not a regular occurrence, but are not uncommon either. In the 20-year history of human operations on the International Space Stations, crews have now redocked their Soyuz spacecraft at different ports 19 times. An additional 29 Soyuz moves were made by cosmonauts on prior Russian space stations, for a total 48 relocations since 1978.