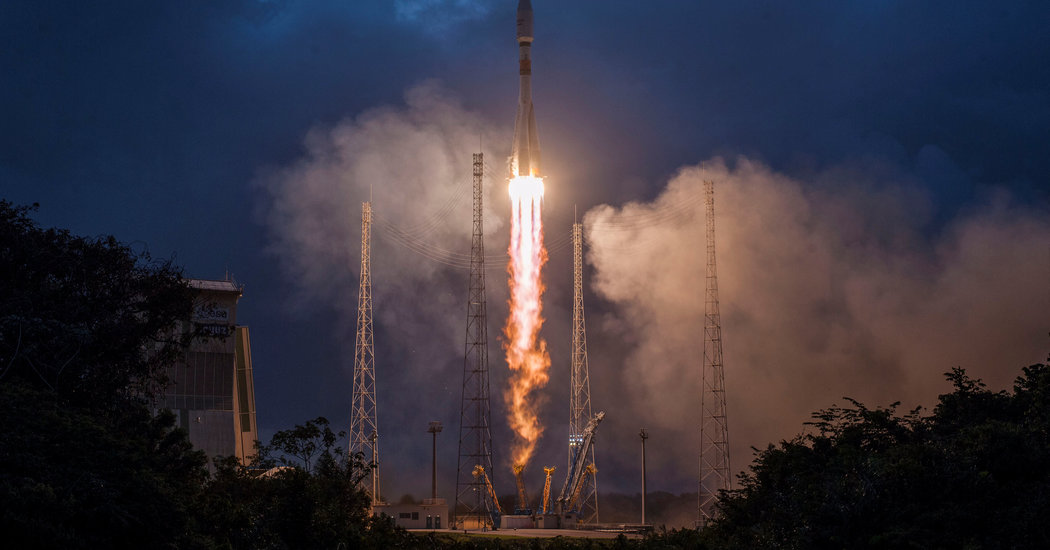 LONDON — As Britain says goodbye to the European Union, the government of Prime Minister Boris Johnson is making a sudden swerve into space. On Friday, a federal bankruptcy judge in New York approved an arrangement under which Britain will become an owner of a company that wants to use satellites to connect customers in remote parts of the world to the internet.

Britain has agreed to pay $500 million for a 45 percent stake in OneWeb, a London company that has launched dozens of satellites orbiting Earth but filed for bankruptcy this year. Bharti Airtel, a telecom company based in India with more than 400 million subscribers, is also taking a 45 percent stake, and other investors may be brought in.

Britain wants to get into a new satellite network because its decision to leave the European Union meant it severed its connection to the European navigation satellite system, called Galileo. Britain, which had invested 1.4 billion pounds in Galileo, is unlikely to be able to use those satellites for strategic purposes, from guiding missiles to steering warships at sea.

With OneWeb, Britain could eventually have access to satellites for military purposes but also take advantage of the company’s technology to beam high-speed internet service to remote parts of the country. Being part-owner of a satellite company would also give Britain a larger piece of the space business, which the government says is growing 60 percent a year and supports £300 billion in economic activity in Britain.

Last week, when Britain’s bid for the company was initially accepted, the government hailed the possibilities of having its own “sovereign global satellite system.”

“The move signals the government’s ambition for the U.K. to be a pioneer in the research, development, manufacturing and exploitation of novel satellite technologies,” the government’s statement said.

The government pointed to “strategic opportunities” with international allies, without providing specifics. It also underscored the economic stimulus that would allow the country to “further develop its advanced manufacturing base, making the most of its highly skilled work force.”

Britain’s business community desperately needs such opportunities. Not only is the country’s economy being hit hard by the effects of the coronavirus pandemic, but companies are threatened with increased tariffs and other obstacles in future business with European partners like France and Germany.

As Britain continues to negotiate its departure from the European Union, the OneWeb deal provides the country leverage in talks on security matters, said Franck Thomas, an adviser on telecommunications and space at Global Counsel, a consulting firm.

Beyond the initial investments, fully developing OneWeb is expected to require at least $1 billion more, possibly from new investors. Britain, though, according to a government release, will have “a final say” over any future sale of the company and over access to OneWeb’s technology.

Founded in 2012 by Greg Wyler, an American entrepreneur, OneWeb aims to use a vast network of satellites (called a constellation) to provide “high-speed services capable of connecting everywhere, to everyone,” its website says. This goal would be accomplished by blanketing lower orbital paths about 750 miles above the Earth with satellites. In May, OneWeb asked the Federal Communications Commission for permission to launch as many as 48,000 satellites.

OneWeb is one of the companies offering smaller, refrigerator-size alternatives to huge communications satellites that can require more than a year to make and cost more than $100 million. Instead, OneWeb says it can churn out two satellites a day at a cost of around $1 million at a factory it operates in Florida in a joint venture with Airbus, the European aerospace giant.

The hope is that some of the satellite building and launching might be transferred to Britain, which already has satellite design and manufacturing facilities belonging to Airbus and other companies.

“If the government is clever about this, it could bring some of that to the U.K.,” said Will Whitehorn, president of UKspace, an industry group, and a former president of Virgin Galactic, Richard Branson’s space tourism company.

Several spaceports are at various stages of development in Britain, including one at Sutherland in northern Scotland and another in Cornwall in southwest England, where Virgin Orbit, another Branson company, may eventually launch small satellites from a converted jumbo jet.

Still, Britain is definitely taking a gamble. Space has proved an enormously costly and risky area to do business. When it filed for bankruptcy in March, OneWeb had already burned through $3.4 billion from a group of investors including Airbus, SoftBank Group and the government of Rwanda. Only 74 of a planned 650 satellites in an initial phase have been launched, and it is still not clear that the company has found a viable way to earn a profit.

OneWeb also has competition. Elon Musk’s SpaceX is orbiting satellites with a similar worldwide internet concept, and other large tech companies like Amazon are eyeing space, creating concerns that a blizzard of orbiting vehicles may make both visual and radio astronomy more difficult.