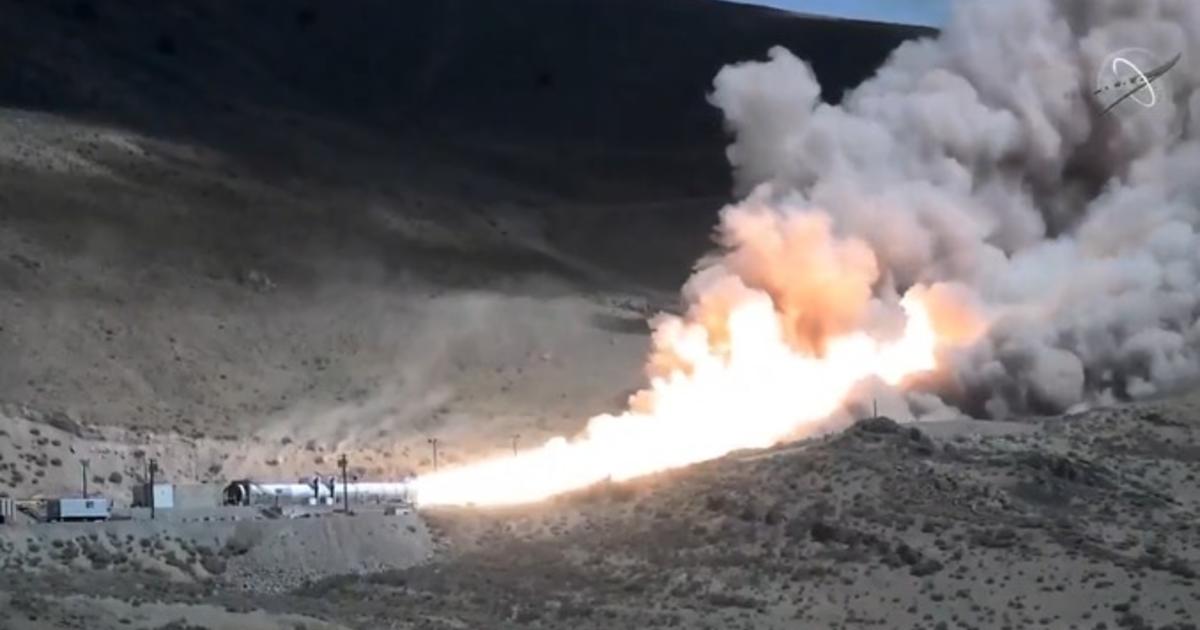 Burning 6 tons of propellant per second, the test motor ignited at 3:05 p.m. ET, instantly blasting out a torrent of flame and a churning cloud of exhaust that towered into a clear blue sky above Northrop Grumman’s manufacturing facility in Promontory, Utah.

A solid-propellant booster like those that will help launch NASA’s new Space Launch System moon rocket was test fired at Northrop Grumman’s Promontory, Utah, facility Wednesday. It was the sixth firing of an SLS booster since 2009. NASA TV

As the propellant burned out, the exhaust jet turned into a billowing cloud of orange fire before a swing arm rotated into the nozzle, flushing the interior of the rocket with carbon dioxide to douse any residual flame.

The SLS rocket Boeing is building for NASA’s Artemis moon program will be equipped with two such solid rocket boosters, or SRBs, providing nearly 7 million pounds of thrust — 75% of the rocket’s take off power — and the hydraulic systems need to move the nozzles for steering.

Four upgraded space shuttle main engines will provide another 2 million pounds of push, giving the SLS an initial liftoff thrust of more than 8 million pounds. For comparison, the liquid-fueled Saturn 5 rocket built for NASA’s Apollo moon program — the most powerful rocket successfully launched to date — was rated at 7.5 million pounds of thrust.

NASA’s planned Space Launch System rocket and solid-propellant boosters, made up of five propellant segments. The boosters will provide 75 percent of the SLS’s power during the first two minutes of flight. NASA

The SLS rocket, carrying an Orion deep space crew capsule, is scheduled for an initial unpiloted test flight late next year. A piloted mission carrying four astronauts around the moon is planned for the 2023 timeframe, followed by a moon landing mission by the end of 2024.

Wednesday’s firing of Flight Support Booster 1, the sixth test of a five-segment SLS booster since 2009, was intended to collect engineering data on the performance of new materials and equipment that may be incorporated in downstream SLS flights.

The SLS solid-propellant boosters are similar to those that helped launch NASA’s space shuttle. But the new version features an additional propellant segment, upgraded avionics and improved materials. The boosters will not be recovered after use and shuttle-era parachutes and other recovery gear have been removed.