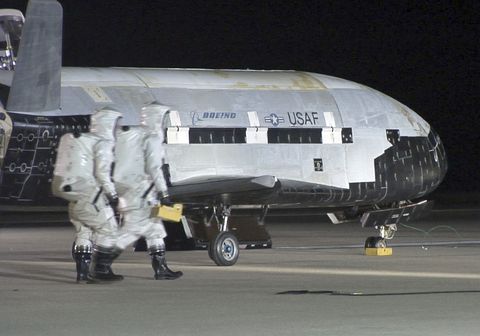 Former Secretary of the Air Force Heather Wilson revealed to an audience last week that the X-37B spaceplane can pull off maneuvers in space that drives potential adversaries “nuts.” Although maddeningly unspecific, experts believe she was referring to the X-37B’s ability to change its orbit, throwing off both amateur and professional satellite watchers and making the spacecraft unpredictable.

According to Military.com, Wilson was speaking at the Apsen Security Forum when she remarked that the X-37B “can do an orbit that looks like an egg and, when it’s close to the Earth, it’s close enough to the atmosphere to turn where it is.”

“Which means our adversaries don’t know—and that happens on the far side of the Earth from our adversaries—where it’s going to come up next. And we know that that drives them nuts. And I’m really glad about that.”

Experts polled by Military.com suggested Wilson is referring to the increased drag that the spaceplane would encounter flying close to the atmosphere. Atmospheric drag, combined with the Space Shuttle-like vehicle’s stubby wings, would make it possible for the X-37B to change its orbit, throwing off space watchers who had previously detected it and predicted it would arrive at a certain point. The maneuver would be carried out while the spacecraft was on the opposite end of the Earth, out of view of adversaries.

Example: the Chinese military has located the X-37B in space and is maneuvering satellites to get a closer look at it. If the U.S. gets wind of the operation, spotting the approaching Chinese satellites, it could order the X-37B to change its orbit—ideally over South America—the opposite end of the Earth from China. The X-37B would simply fail to show up at the designated time, forcing the Chinese to reacquire the spacecraft and start the operation all over again.

A hint of this capability may have been mentioned earlier this year, when a civilian space watcher released photos of the X-37B. Dutch satellite watcher Ralf Vandebergh told Space.com he originally caught sight of the X-37B in May of 2019 but when he went to look for it again in June the spaceplane was nowhere to be found. It had moved to a different orbit.

Langbroek has written a blog post about the X-37B’s purported abilities. His conclusion: “the orbital history of the five X-37B OTV missions so far do not evidence the alleged maneuverability in orbital plane”.