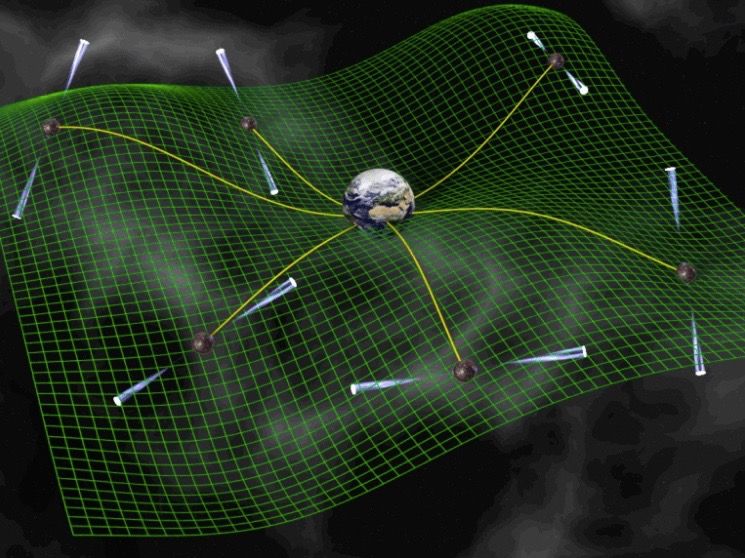 Space is supported by its audience. When you purchase through links on our site, we may earn an affiliate commission. Learn more

The NANOGrav project is attempting to detect gravitational waves via the close observation of an array of pulsars.

Astronomers have found a way to pinpoint our solar system’s center of mass to within a mere 330 feet (100 meters), a recent study reports.

Such precision — equivalent to the width of a human hair on the scale of a football field — could substantially aid the search for powerful gravitational waves that warp our Milky Way galaxy, study team members said.

Astronomers have typically located our solar system’s center of mass, or barycenter, by carefully tracking the movement of the planets and other bodies orbiting the sun. Such work has revealed that the barycenter is in constant motion; it can lie near the center of the sun, just beyond its scorching surface or pretty much anywhere in between, depending on the positions of the planets.

Related: Our solar system: A photo tour of the planets

But these previous calculations are compromised by an imperfect understanding of planetary motion, specifically that of Jupiter, which is the solar system’s gravitational second-in-command. In the recent study, researchers took a new approach, analyzing observations of pulsars made over more than a decade by the North American Nanohertz Observatory for Gravitational Waves (NANOGrav) project.

Pulsars are rapidly spinning neutron stars, superdense stellar corpses that pack a whole lot of mass into a sphere about the size of a city. Pulsars emit beams of radiation continuously from their poles. These beams appear to pulse (hence the name) because astronomers can only detect the radiation when it points at Earth.

NANOGrav closely monitors pulsars using radio telescopes, chiefly the big ones at the Arecibo Observatory in Puerto Rico and the Green Bank Observatory in West Virginia. Pulsars are incredibly consistent, so any deviation in the usual timing of their beams’ arrival here on Earth could be evidence of warping by gravitational waves, the space-time ripples first predicted by Albert Einstein a century ago.

The Laser Interferometer Gravitational-Wave Observatory (LIGO) project made the first-ever direct detection of gravitational waves in 2015 and has added to its tally considerably in the ensuing years. Most of the detected ripples were generated by merging black holes, but two of the events involved colliding neutron stars.

In general, LIGO is designed to find short-period gravitational waves spawned by relatively low-mass objects spiraling toward each other. An April 2019 detection, for example, was traced to two neutron stars that together harbored just 3.4 times the mass of our sun.

NANOGrav is after bigger fish: long-period waves generated by merging supermassive black holes, the light-gobbling monsters that lurk at the heart of galaxies and can contain billions of solar masses. Detecting and studying such waves could shed considerable light on galaxy evolution and the relationship between galaxies and their central black holes, project team members have said.

And nailing down our solar system’s center of mass is a key part of that effort.

“Using the pulsars we observe across the Milky Way galaxy, we are trying to be like a spider sitting in stillness in the middle of her web,” study co-author Stephen Taylor, an assistant professor of physics and astronomy at Vanderbilt University in Tennessee, said in a statement. “How well we understand the solar system barycenter is critical as we attempt to sense even the smallest tingle to the web.”

So the recent study, which was published in April in The Astrophysical Journal, may end up being a step along the path toward a groundbreaking discovery.

“Our precise observation of pulsars scattered across the galaxy has localized ourselves in the cosmos better than we ever could before,” Taylor said. “By finding gravitational waves this way, in addition to other experiments, we gain a more holistic overview of all different kinds of black holes in the universe.”