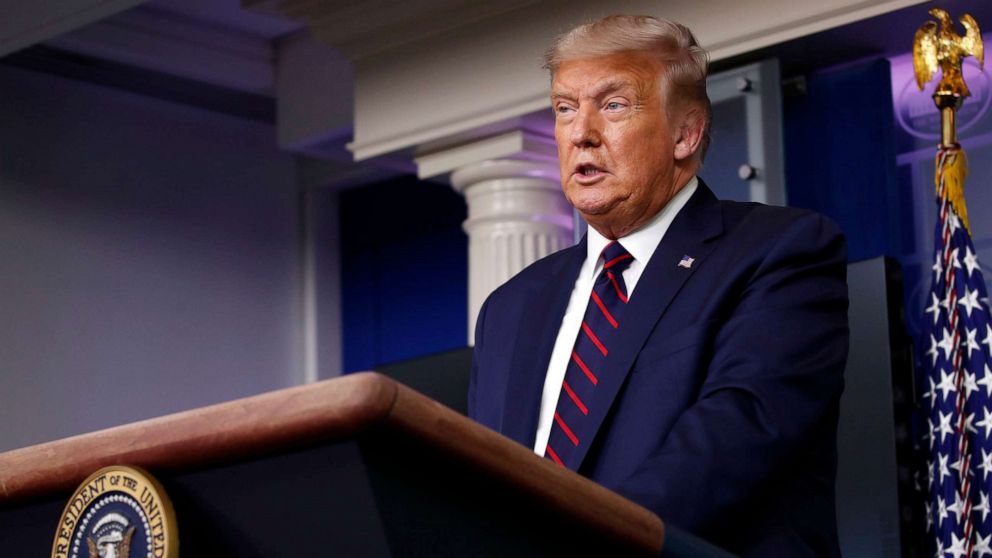 Continuing to offer misleading comparisons of the U.S. death rate compared to other countries, President Donald Trump in a news conference Tuesday evening said “strong mitigation efforts” are “working very well” and rattled off numbers he called “spectacular” on the country’s economy and handling of the coronavirus pandemic.

“Thanks to substantial improvements in treatment and the knowledge we have gained about the disease itself the recent rise in cases has not been accompanied by a significant increase in deaths,” he continued in prepared remarks. “Fatalities nationwide are at roughly half the level of the April peak.”

It comes on the heels of response coordinator Dr. Deborah Birx, who Trump publicly criticized for the first time Monday, telling governors in a call to expect deaths to rise in hotspot areas.

“We do see continuous, probably, rise in mortality over the next two weeks,” Birx said Monday, according to an audio recording of the meeting obtained by ABC News.

Trump on Tuesday also continued to tout the country’s testing capabilities, despite reports of persistent delays in getting results.

“We’ve done an incredible job and testing. Nobody in the world has done the job. Other leaders have told me the same thing. They can’t believe we’re able to do it,” Trump claimed.

Confronted with the fact that Johns Hopkins University ranks the U.S. fourth in coronavirus deaths as a proportion to population, Trump told a reporter he has “four or five different lists” on the matter and the U.S. is “among the lowest.”

Though coronavirus cases surge and deaths rise in the U.S., Trump in an interview that aired late Monday on HBO defended and doubled down on what he called “positive thinking” when it comes to the pandemic.

When Axios’ Jonathan Swan challenged him with the reality that 1,000 Americans are dying a day, Trump said: “They are dying. That’s true. And you have — it is what it is — but that doesn’t mean we aren’t doing everything we can. It’s under control, as much as you can control it.”

Tuesday’s briefing comes as talks between the White House and Democratic leadership on another round of coronavirus relief show little-to-no signs of progress.

Treasury Secretary Steven Mnuchin told reporters after talks with Democrats on Tuesday that the two sides had agreed to try to reach a deal by week’s end.

MORE: Coronavirus relief negotiators set deadline for a deal by week’s end as Dems add $300B for schools to their pitch

ABC News has learned that Democrats have asked for an additional $300 billion for schools in negotiations with the administration, three times the amount passed in May by the House in their $3.4 trillion relief bill, while Republicans are reporting that they are far from unified on their own position, further complicating the math for a deal.

When asked Tuesday afternoon if the presidential move was still on the table, Mnuchin replied, “Absolutely.”

What to know about the coronavirus: