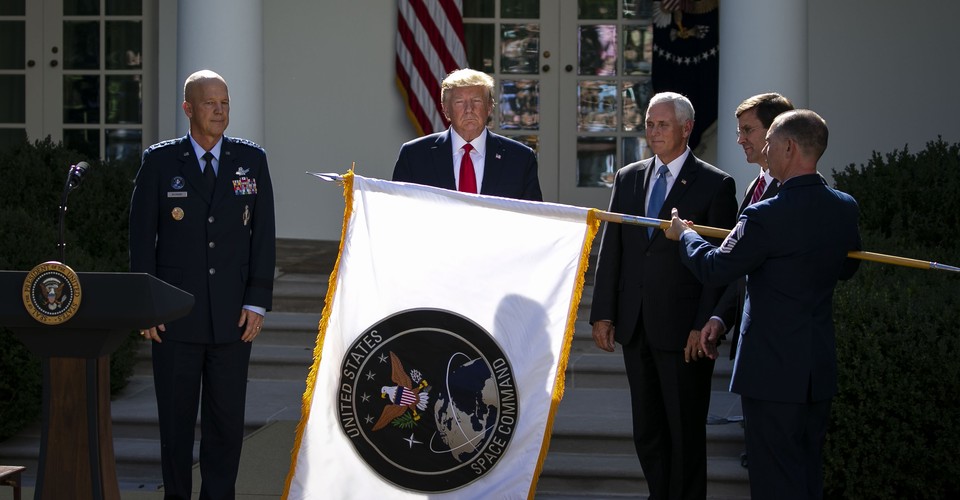 The concept showed up again in 2017 in bipartisan legislation in the House, which proposed the creation of a space corps, but the bill failed to gain approval in the Senate. Even Trump’s Pentagon officials, including former Defense Secretary Jim Mattis—who has since resigned—opposed the idea, saying that it would only introduce more bureaucracy in an already complex organization structure. (They quickly reversed their stance once the president expressed interest.)

Trump has presented the Space Force as something unprecedented, especially during rallies, and his administration saw an opportunity in the applause lines that always came. In the summer of 2018, the president’s campaign team sent an email to supporters chock-full of colorful logos for the future Space Force and invited them to vote for their favorite. One reimagined NASA’s logo, while another declared that “Mars Awaits.” (NASA, a civilian agency, doesn’t work on military space programs.) After clicking, supporters were delivered to a page seeking donations for Trump’s reelection.

The intent was clear, as my colleague David Graham wrote: “The Trump campaign appears to be selling the logo rights to the Space Force in exchange for campaign donations, turning the government into a tool for Trump’s own political enrichment.” It was a bold move considering the Space Force did not yet exist.

The immediate future of the Space Force involves a lot of paperwork and a dash of symbolism, rather than new uniforms and fight songs. Raymond will join the Joint Chiefs of Staff, the military officials who advise the president directly, and the service must come up with and submit an organization plan to Congress in February.

While the Space Force is now official, a slight disconnect in reality remains. “Join us as we watch history in the making. First launch of US Space Force!” the branch’s Twitter account announced earlier this month, with a link to a livestream of a SpaceX launch of its internet satellites. It was an accurate statement, in one way: The 45th Space Wing, the Air Force unit that oversees launches from Cape Canaveral, has been reassigned to the Space Force. But aside from the rebranding, there was nothing different about the mission.

Defense officials say the Space Force will become fully operational by 2024. Until then, it will no doubt remain one of Trump’s favorite namedrops on the campaign trail, a move that may jeopardize the new force’s future. Bipartisan policies—which the Space Force used to be, for the most part—have the best chances of surviving White House transition. (Most Democrats opposed the creation of any kind of Space Force, but they only got on board after the White House promised more parental-leave benefits for federal workers in exchange.) “When the president got involved and made this a campaign rallying cry, it became political,” Forczyk said. The next president may see fit to roll back the young Space Force, logos and all.

We want to hear what you think about this article. Submit a letter to the editor or write to letters@theatlantic.com.

is a staff writer at The Atlantic.