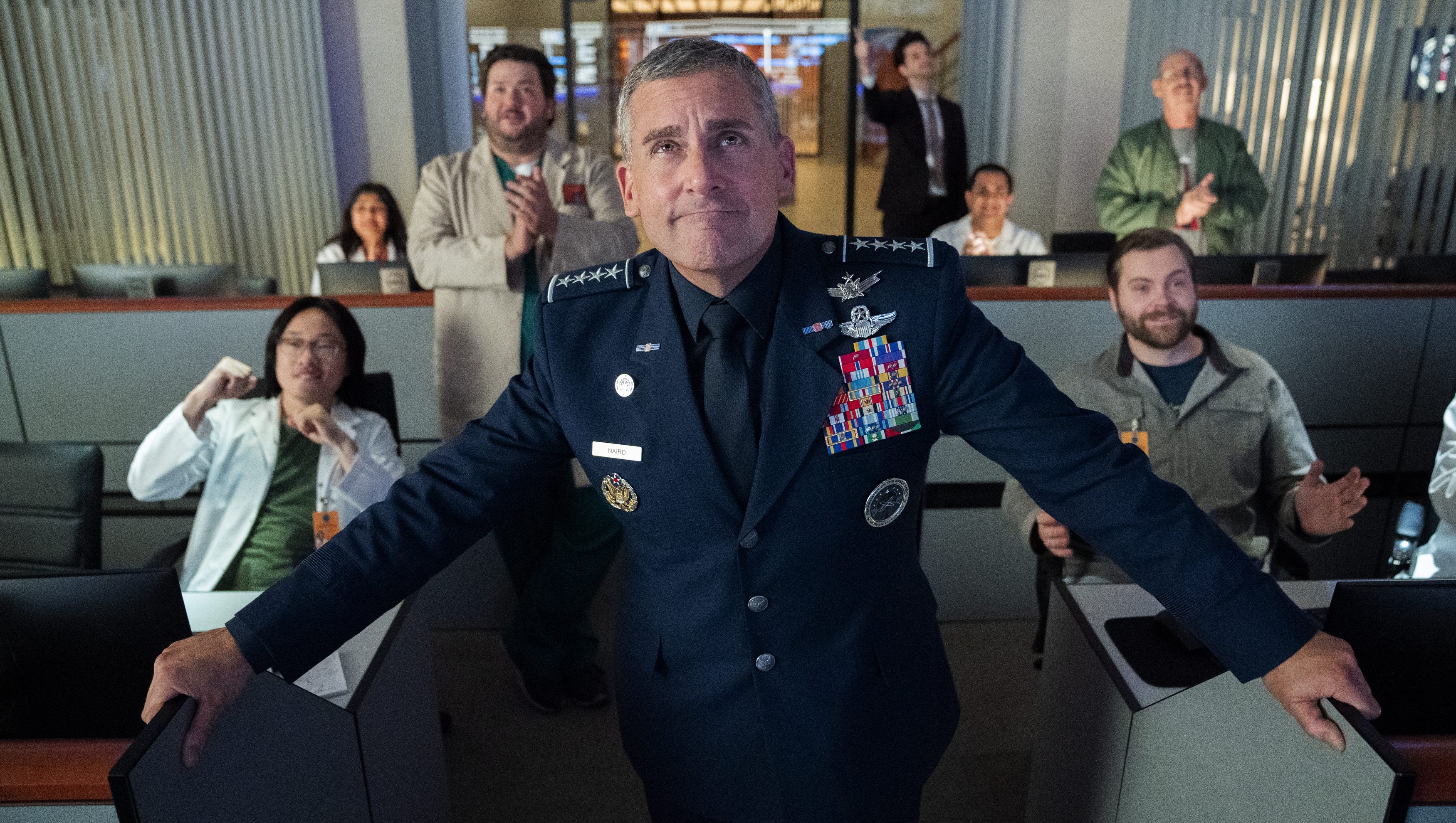 Space Force is a high-budget sci-fi and political comedy starring Steve Carell, and I couldn’t be more delighted about the latest addition to the streaming giant’s original series collection. Netflix gave screeners to Heavy for early review. Despite the negative reactions shared by other critics, I found Space Force to be a fun series with the right doses of serious moments mixed with comedy. The show left me genuinely laughing out loud. Sure, it’s not The Office. But it stands well on its own and provides a great distraction from our current crazy pandemic world.

This is a spoiler-free review.

Space Force tackles a lot of interesting plotlines, from family drama to science fiction. For me, the most enjoyable part was seeing the push-and-pull between scientists and the military, with politicians trying to pull the strings in the background. Steve Carell’s Gen. Mark Naird comes across at times as that narcissistic boss who pushes for his own way even if he doesn’t know what he’s doing. But at other times he’s a surprisingly personable character that you find yourself rooting for. I enjoyed that nuance.

What I liked about this series is that it doesn’t paint too many characters with a one-dimensional brush. This wasn’t a series where the scientist is always right and the bumbling military character is always wrong. There’s enough push-and-pull that you may not always be sure how a particular interaction is going to turn out.

In fact, this lack of caricature (at least for the most major characters in the series) is what I enjoyed. I liked this series better than Avenue Q because I felt like too many main characters in Avenue Q were quite one dimensional after just three episodes. In contrast, I wasn’t always sure what a character would do or how a scene would turn out on Space Force, although I could certainly guess at which characters would have the most conflict between them.

Despite the name, Space Force didn’t become highly political, which I’d guess might be why some critics are so negative about the series. There are plenty of hints at a Trump-like President and the difficulties of responding to policies made through tweets, but we aren’t treated to long scenes warning about one political party versus another. The show’s not trying to make sweeping political statements. Instead, the series is a mix of sci-fi, military, and family comedy — and it’s a mix I really enjoyed.

Some people who come in expecting this to be at the level of The Office might also be disappointed. But there are certainly still some “cringe” moments that I haven’t felt since I watched Michael Scott. Carell’s character is basically Michael Scott but smarter, which makes for an entertaining dynamic.

Another gem that I loved in this series was Jimmy O. Yang as Dr. Chan Kaifang. I was familiar with his character on Silicon Valley, but he plays a very different character this time. His scenes were among my favorites.

I also loved John Malkovidch’s Dr. Adrian Mallory. Without spoiling anything, I’ll just say there was a scene where he was ranting to himself and I could relate to it so much. I laughed and laughed because I felt like I’d do something similar myself.

Fred Willard’s role is sobering, knowing that he’s no longer with us. But I was glad to see him on the screen.

Don’t get me wrong. Characters didn’t always act smart and sometimes I really rolled my eyes at certain actions. But overall, the jokes hit home and I found myself laughing out loud quite a bit. No, I didn’t laugh as much as I do at Rick and Morty. But I also can’t expect every show to be quite that funny. Space Force was great, I genuinely laughed out loud, and I always found myself wanting to quickly move to the next episode to see what was next. I was glad that, despite the name, it didn’t hit me over the head with politics over and over. It was a fun distraction from our world today, and I recommend the series to anyone who has Netflix.