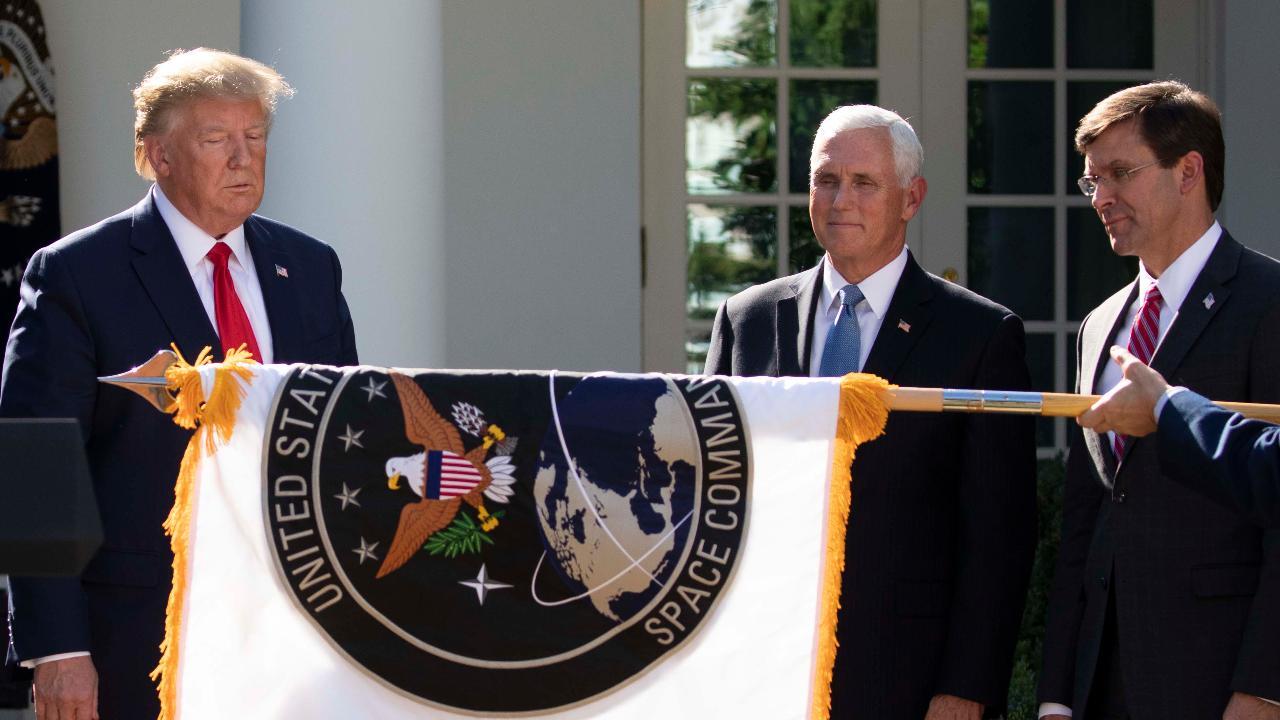 President Donald Trump on Thursday formally established a new military headquarters for space operations as part of his efforts to ensure the Pentagon maintains an edge over potential adversaries like Russia and China.

The U.S. Space Command will be responsible for defending military satellites and other space systems and will draw on troops from other branches of the military as well as Trump’s proposed Space Force, which is awaiting approval from Congress.

“It will ensure that America’s dominance in space is never questioned and never threatened because we know the best way to prevent conflict is to prepare for victory,” Trump said during a Rose Garden ceremony with his top national security team.

The new Space Command will be on par with other military headquarters that are responsible for different geographic regions of the world or have distinct missions such as cyber operations.

By signing up you agree to receive email newsletters or alerts from POLITICO. You can unsubscribe at any time. This site is protected by reCAPTCHA and the Google Privacy Policy and Terms of Service apply.

Gen. John Raymond, the current head of the Air Force Space Command who has also been tapped to run the new outfit, told reporters at the Pentagon earlier that a top priority will be to build new alliances with other militaries that similarly view space as a potential conflict zone.

“Historically, we haven’t needed allies in space,” he said. “It was a benign domain. We absolutely are open for new partnerships.”

The Pentagon decided to reestablish the U.S. Space Command, which existed in another form between 1985 and 2002, after a review concluded the military’s increasing reliance on space technologies required a dedicated “combatant command” due to advances in weaponry by China and Russia that could destroy satellites in orbit or disable them through other means such as cyberattacks.

“I really believe we’re at a strategic inflection point where there’s nothing that we do as a joint coalition force that isn’t enabled by space. Zero,” Raymond said. “Our adversaries have had a front row seat in our many success in integrating space and they don’t like what they see because it provides us such great advantage. They’re developing capabilities to negate our access to space.”

At first, the new command will include 287 personnel at a location that has yet to be determined, Raymond said. The Pentagon is reportedly considering six locations at bases in Colorado, Alabama and California.

Most of those personnel are already carrying out space-related tasks under U.S. Strategic Command, which oversees the nation’s nuclear weapons, and will simply switch commands, he added.

Five military space operations centers in California, Colorado and New Mexico will also be folded into the new organization.

The National Reconnaissance Office, which builds and operates the Pentagon’s spy satellites, will remain independent but report to U.S. Space Command during “higher states of conflict,” Raymond said, although he declined to elaborate on what would qualify to meet that standard.

The Pentagon requested $83.8 million to establish U.S. Space Command in fiscal 2020. Of that, $75.6 million would be transferred from organizations already conducting space operations, Raymond said.

“This is an important step to support the space warfighting domain and ensures our strategic competitors, Russia and China, realize we are serious about implementing our National Defense Strategy,” Senate Armed Services Chairman Jim Inhofe (R-Okla.) said in a statement. “The next step is establishing the United States Space Force, which we are working on as part of the final National Defense Authorization Act.”

This article tagged under:

Missing out on the latest scoops? Sign up for POLITICO Playbook and get the latest news, every morning — in your inbox.