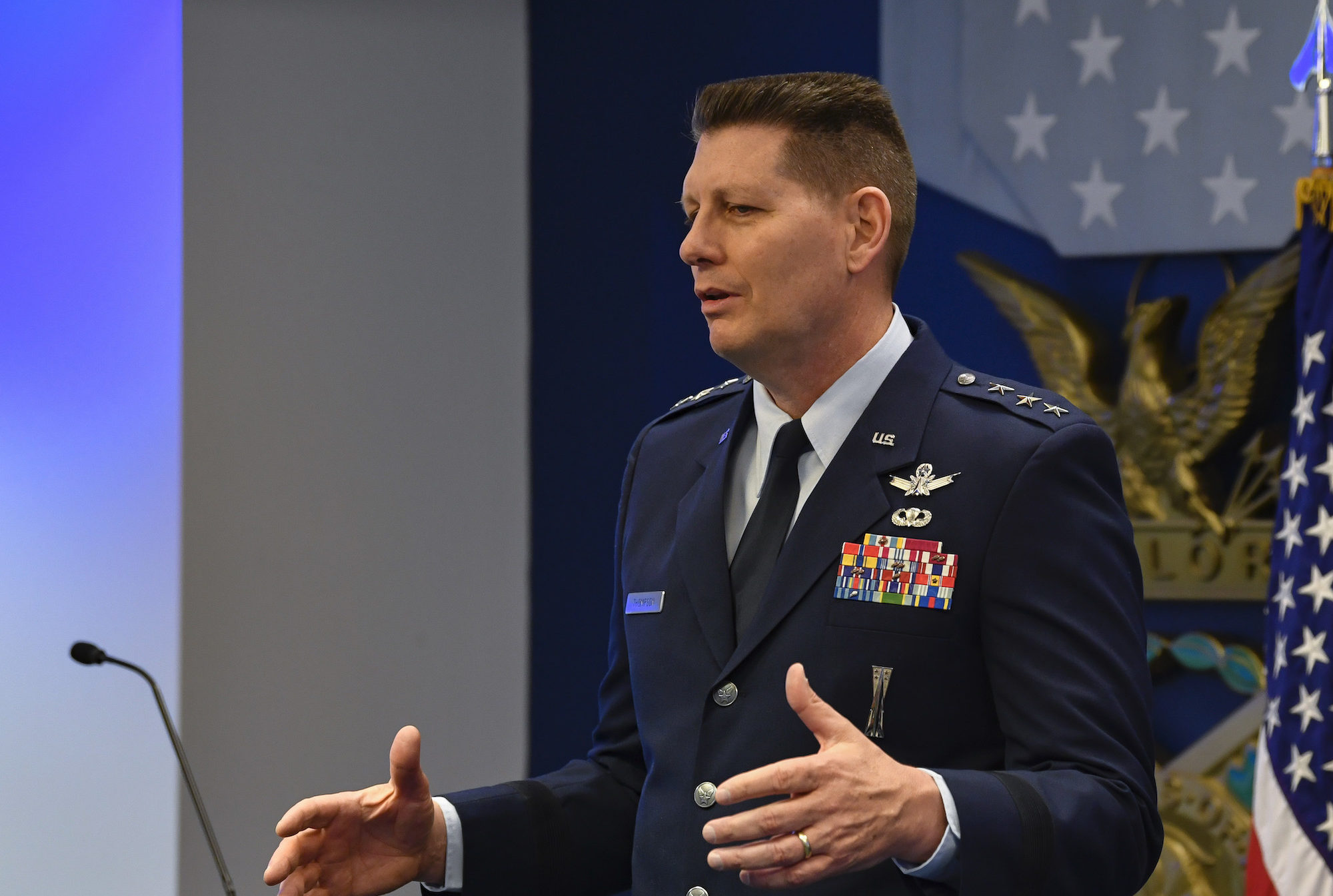 Thompson: A major concern is a misconception that the Space Force will set national space policy.

NATIONAL HARBOR, Md. — Air Force leaders are working to dispel what they believe are misconceptions about the future Space Force as they continue to press lawmakers to enact the new branch of the armed services.

“There’s a lot of conversation going on about the mission, the vision, on what does it do?” said Lt. Gen. David “DT” Thompson, vice commander of Air Force Space Command. And a lot of what is being said is inaccurate, Thompson told SpaceNews on Wednesday at the Air Force Association’s Air Space & Cyber conference.

A major concern is a misconception that the Space Force will set national space policy and will lead in what historically have been civilian efforts like space exploration and economic exploitation of space, Thompson said. “There’s a discussion about this grand vision that the Space Force is going to orchestrate economics, and civil and all kinds of other sectors of the economy to take us to the moon and Mars,” he added. “That’s not the way the American system works.”

The Space Force will be much smaller than the other military services, but will have the same basic responsibility to “organize, train and equip” forces so they can be ready to respond during a crisis. For example, U.S. Space Command or another military combatant command would need space operators to help defend satellites if they are targeted by enemy lasers or anti-satellite missiles.

“We have a lot of policy and guidance and direction about what the Space Force should be,” said Thompson. “It’s going to be a sixth branch of the armed services. The job of a service is to organize, train and equip forces for combatant commanders.”

Thompson, who is on the short list of candidates likely to be considered to run a future Space Force, has been among the small cadre of Pentagon officials working directly with congressional committees on the National Defense Authorization Act for Fiscal Year 2020 language to authorize a Space Force.

Senate and House conferees for the NDAA will meet tomorrow to begin the process of resolving differences between the House and Senate versions of the defense authorization bill.

Among the issues to be hashed out is whether to authorize the establishment of a Space Force as a sixth branch of the armed forces, and if authorized, lawmakers have to decide how much leeway they will give the Pentagon on the specific details of how the new service will be structured and resourced.

Thompson insisted that the Space Force will focus strictly on its military responsibilities but also will support the nation’s broader space policy goals which would be set by the president, the National Space Council and Congress.

Thompson’s own Air Force Space Command might have contributed to the perception that the Space Force wants to take over all things space. The command released a report on Sept. 5 titled “The Future of Space 2060 and Implications for U.S. Strategy” that is based on a workshop the command hosted with experts and academics. The report calls for a national vision for space and lays out three scenarios that assume a major increase in the importance of space globally, with the United States exerting space leadership across the civil, commercial and military realms.

One scenario called “Star Trek” assumes significant global civil, commercial and military expansion in space, with thousands of humans living or working in space at a variety of habitats across cislunar space, the moon, and Mars.

A second scenario named “Garden Earth,” also assumes significant expansion of space activities but human presence is limited and most processes are controlled remotely or robotically.

The third scenario is “Elysium.” It too assumes growth in space activities and colonization, but large revenue streams have yet to materialize.

But when asked about the study, Thompson rejected the premise that it is advocating for the Space Force to take on a larger than necessary role. The futures posited in the study are meant to provide fodder for policy makers but the study in no way implies that the Space Force will dictate that path forward, Thompson said.

As space becomes an important engine of economic growth and a critical national security concern, many sectors of the government and the industry will have assigned responsibilities, Thompson said. “There’s a role for the Space Force, a role for DoD, for NASA, for the commercial market, the intelligence community, the Department of Commerce,” he said. “Each sector has a role to help shape and achieve that future.” The Space Force over time “will have a large role to play, but to say it’s going to be the Space Force’s job to take us in this direction is well beyond what we’ve ever asked for.”

The Space Force “will play a role getting us there,” Thompson said. “But at the higher level, the president and the National Space Council do the grand strategy and vision and it’s the Space Force’s job to help execute.”

Because civilian, military and many commercial space systems are all considered national assets, Thompson said the Space Force will prepare forces to “protect our interests in space, and that includes commercial, civil and military.” The broader vision, however, “has to be marshaled as a whole of government.” The Space Force will have significant responsibilities, said Thompson, “but you just don’t say, ‘Hey Space Force, you go set the vision and take the entire nation down that path.’”

Thompson defended the importance of studies like “The Future of Space 2060” to help set high level policy. “These are possible futures we see,” he said. “The nation needs to ensure we have a strategy and vision to make sure we end up in one of these three futures. It’s not out of sync.”

What will Congress do next?

The final NDAA language will not be settled for several weeks. Thompson said he is optimistic about the outcome. “You never know. It feels like both sides want to go in the same direction,” he said. “But when they get together in conference you never know what is going to come out. Hopefully they’re going to give us something.”

The Air Force is ready to execute whatever legislation is passed, he said. “All they have to do is give us something to work with.”

Thompson and other defense officials have called on Congress to make sure they revise Title 10 of the U.S. Code to add a new armed service. “It’s a simple and fundamental change,” he said. “The law has to say you are authorized to create a Space Force.”

The House version of the NDAA specifically says “create a Space Corps,” Thompson noted. “It’s not dramatically different than what DoD proposed, except the name.”

The Senate version is less explicit. “It says ‘let’s get started, prepare to do that in the future. It’s a little different that the House,” said Thompson. “The Senate didn’t specifically say ‘you shall establish a Space Force’ but they started us down that path. Hopefully the conference will work it out, give us the authority, even if the authority says ‘begin the work now and you’re authorized to establish it by a certain date.’”

If the Space Force is authorized, it would be led by a four-star officer and its top civilian leader would be the secretary of the Air Force.

Trump’s nominee to be the next secretary, Barbara Barrett, is expected to be confirmed by the Senate on Thursday.

Thompson said he has met with Barrett and that she expressed enthusiasm for the challenge ahead to get the Space Force off the ground. “She’s told us several times, very clearly, ‘Don’t be constrained by the past. Start with a clean sheet of paper and tell me what the organization should be,’” Thompson said. Barrett believes the Space Force should be lean and nimble, he said. “She is very much anti-bureaucracy. It sounds like she’s just ready to go.”