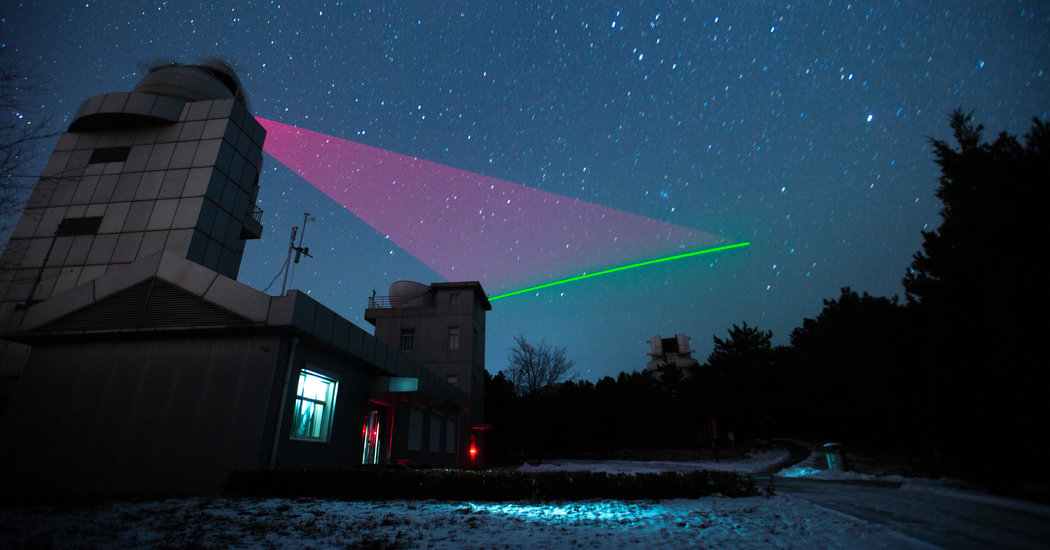 A quantum communication ground station in Xinglong, in northern China, in 2016, communicating with the quantum satellite Micius, the world’s first.Credit…Jin Liwang/Xinhua, via Alamy Live News

The world of artificial satellites, silent in the void of space, might seem pacific. In fact it’s a high-flying battlefield rife with jamming, snooping, blinding, spoofing, hacking and hostility among the planet’s growing array of spacecraft and space powers. Now, Chinese scientists report new progress in building what appears to be the first unbreakable information link between an orbiting craft and its terrestrial controllers, raising the odds that Beijing may one day possess a super-secure global communications network.

In the journal Nature on Monday, the team of 24 scientists describe successfully testing the transmission of a “secret key” for encrypting and decrypting messages between a satellite and two ground stations located roughly 700 miles apart.

The method enlists quantum entanglement, an idea of modern physics that seems ridiculously at odds with common sense. It posits that a pair of widely separated subatomic particles can still seem instantaneously linked: Measuring a property of one will simultaneously affect the measured results on its companion, even if the two are millions of light-years apart. Albert Einstein called quantum entanglement “spooky action at a distance.”

The Chinese authors, who in 2017 first reported on entanglement success in a satellite transmission, now show that they have increased its efficiency and reduced error rates enough to use quantum entanglement for the relay of cryptographic keys. In a research summary, Nature said the team had demonstrated that the system “produces a secure channel that is resistant to attacks.”

Duncan Earl, a former scientist at Oak Ridge National Laboratory and president and chief technology officer of Qubitekk, a company in Vista, Calif., that is exploring quantum encryption, said that the Chinese advance appeared to be significant.

“It’s an important milestone,” Dr. Earl said in an interview. “It’s the scaling of the technology that makes this so important. They’re an incredible group.”

Traditional communications satellites used radio waves to send signals. In contrast, the quantum communication satellite uses pairs of entangled photons, or light particles, whose properties remain entwined even as one photon is transmitted over a long distance. Messages are sent by manipulating the properties.

The scientist in charge of China’s quantum satellite effort is Jian-Wei Pan, who is the senior author on the Nature paper. He is a physicist at the University of Science and Technology of China, in Hefei, the capital of Anhui Province in east-central China.

A 2012 profile of Dr. Pan in Nature reported that he was in his early 30s when, in 2001, he set up China’s first laboratory for manipulating the quantum properties of photons. “The lucky thing was that, in 2000, the economy of China started to grow, so the timing was suddenly right to do good science,” Dr. Pan said.

In August 2016, from the Gobi Desert, China launched the world’s first satellite for testing the transmission of quantum information on light particles. The satellite was nicknamed Micius after a Chinese philosopher of the fifth century B.C. It fired concentrated beams of laser light to relay the quantum signals between two telescopes built at ground stations in Delingha and Nanshan, in China, 700 miles apart.

Then, in June 2017, Dr. Pan and 33 of his Chinese colleagues reported transmission success in the journal Science. The signal’s efficiency, they said, was “orders of magnitude higher than that of the bidirectional transmission of the two photons through telecommunications fibers,” the standard approach.

In the new paper, Dr. Pan’s team reported that it had increased the efficiency of the communications link by upgrading the telescopes and optics as well as the fine tracking of targets among the system’s far-flung parts.

The experimental results showed a rise in the practical security of secret-key transmission “to an unprecedented level,” the authors wrote.

Dr. Earl of Qubitekk said that the Chinese transmissions between Earth and space had previously shown much weakening from such environmental factors as clouds and rain. “This is progress and a significant step forward,” he said of the newly disclosed research.

NASA has drawn up plans to rival the Chinese advance. Known as the National Space Quantum Laboratory program, it intends to use a laser system on the International Space Station to relay quantum information between two ground stations. The program was initiated in 2018.

Generally, Dr. Earl said, Beijing seems far ahead of Washington in the race to master the quantum riddles and their practical applications in space. He noted that he has no access to classified information and thus cannot evaluate the nation’s possible secret progress.

Dr. Earl estimated that matching China’s quantum accomplishments in orbit will take the unclassified parts of the United States program another three years “and maybe longer, which is pretty concerning. We have a long way to go.”