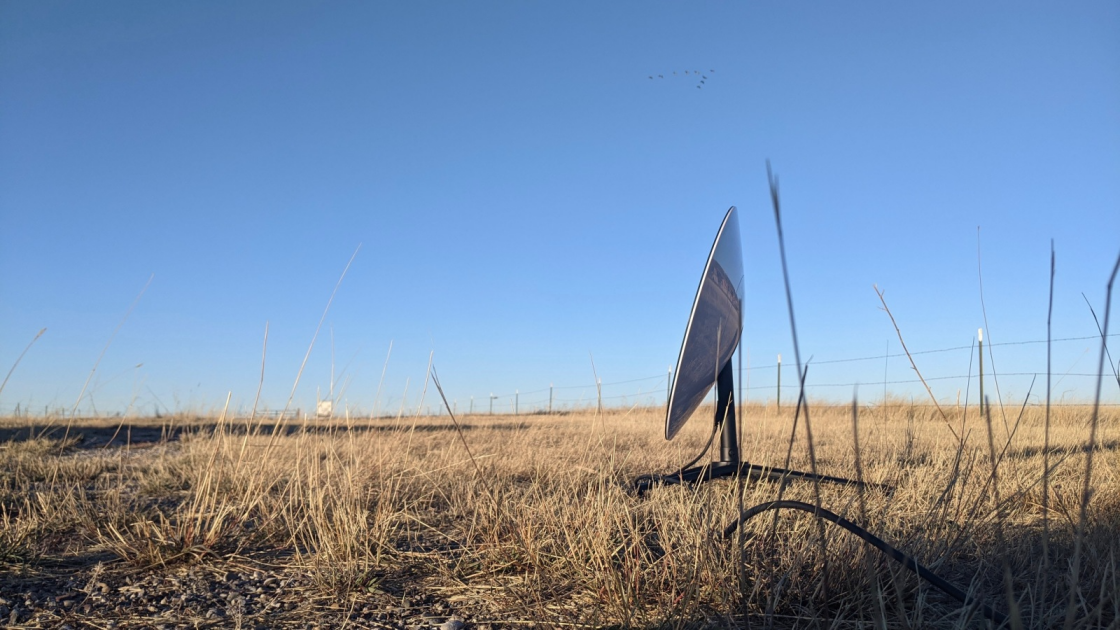 What is Starlink? Technically speaking, it’s a satellite internet system. But to average web users, it’s a potential godsend.

Am I exaggerating? Not really. If you live in a city or a big suburb, you probably enjoy fast internet speeds, maybe at 1Gbps or beyond. But imagine enduring internet speeds at 20Mbps, or even as low as 0.8Mbps, every day. What’s worse, your home only has one or two internet service providers to choose from, leaving you stranded with crummy service.

Unfortunately, millions of people across the US, and the globe, are stuck in this very situation. Installing fiber in a city, and bringing Gigabit broadband to million of customers is certainly lucrative, but not so much in a rural area home to only a few hundred people.

Enter Starlink. The satellite internet system from SpaceX is capable of delivering 150Mbps internet speeds to theoretically any place on the planet. All the customer needs is a clear view of the sky. Last fall, the system began serving its first users, many of whom were based in remote or rural regions of America—and the response has so far been ecstatic.

Below, we’ll cover basic questions about Starlink, including ones we’ve heard from our readers. Let us know in the comments what other questions you have, and we’ll update the story.

Go to Starlink.com. The site will take your address, and it’ll let you know if the satellite internet service is available in your area. If not, the company will tell you the approximate date when Starlink will arrive. Most users will probably have to wait months; Starlink is currently serving over 10,000 users. But “hundreds of thousands” of people across the US have signed up in the hopes of trying it out, according to a February filing SpaceX submitted to the FCC. Requests are also being handled on a first-come, first-served basis. To reserve a spot, you can place a refundable $99 deposit through the Starlink website’s pre-order function.

How Much Does It Cost?

Starlink currently costs $99 a month. You’ll also have to pay a one-time $499 fee for the Starlink satellite dish and Wi-Fi router, which the company will ship to your home. It’s not cheap, but users in rural areas who have long struggled with slow broadband have told us that Starlink’s fast internet service makes the cost worth it.

How Does Starlink Work?

Satellite internet technology has been around for decades. It involves beaming internet data, not through cables, but via radio signals through the vacuum of space. Ground stations on the planet broadcast the signals to satellites in orbit, which can then relay the data back to users on Earth. One of the main existing providers has been HughesNet, which relies on satellites 22,000 miles above the planet.

SpaceX’s system improves on the technology in two notable ways: The company wants to use low-Earth orbiting satellites that circle the planet at only around 300 miles above the surface. The shortened distance can drastically improve the internet speeds while also reducing latency. Second, SpaceX wants to launch as many as 40,000 satellites in the coming years to power the system, ensuring global coverage without service dropouts.

How Fast Is Starlink? Is the Internet Consistent?

A speed test from a Starlink user (Credit: Ricky Viles)

Starlink is currently delivering 80Mbps to 150Mbps in download speeds and about 30Mbps in upload speeds, according to users. Meanwhile, latency comes in at around 30 milliseconds, which is on par with ground-based internet. Later this year, SpaceX plans on bumping up the download speeds to 300Mbps, while bringing down the latency to 20ms.

The speed increase will occur as SpaceX launches more Starlink satellites into orbit, which as of March 2021, number at over 1,100. The company’s long-term goal is to eventually operate thousands of satellites, paving the way for download speeds at 1Gbps and then 10Gbps. However, Starlink service is also a work in progress. Users say the speeds can vary, and sometimes short outages can occur.

What About Congestion as More Users Join?

That’s something we’ve been wondering about. Last September, financial analysts at Cowen released a report that estimated Starlink will only have enough capacity to serve 485,000 users even if it has 12,000 satellites in orbit. Two trade groups that represent small ISPs and fiber-based broadband providers also told the FCC they expect Starlink will suffer from congestion problems in the coming years due to too many users on the service.

We’ll have to wait and see. SpaceX hasn’t really discussed the congestion issues. Nor has it elaborated on the exact limits of its satellite internet technology, which it plans to improve over time. But it’s something to watch for as Starlink expands to hundreds of thousands of users.

Does Starlink Work in Cold Weather or the Rain?

Yes, it does. SpaceX made sure to design the Starlink satellite dish to work in wintery and wet climates by building a heater into the dish itself. As a result, the dish can melt any ice around it.

“I have not had any issues with it in the rain at all,” a user in Oregon told us. “The longest down time I have had is maybe one minute and then it came right back on. I am overly happy with the service so far.”

However, SpaceX still advises users to keep the dish clear of snow to ensure the signal quality isn’t disrupted. “Heavy rain or wind can also affect your satellite internet connection, potentially leading to slower speeds or a rare outage,” the company says in a FAQ.

Where Is Starlink Available?

Unfortunately, there’s no official coverage map. But we did recently publish our own map (above) of Starlink activity based on Ookla’s Speedtest data. It shows the system is already serving users mainly in Washington, Oregon, Idaho, and other states in the northern US.

The Reddit community for Starlink has also been tracking the system’s rollout, by compiling where users are receiving invites to try out the service. Their data shows Starlink has expanded to select areas in over 30 US states and seven provinces in Canada. The company has also brought the service overseas to the UK, Germany, and New Zealand.

I Live in a City or Suburb. Can I Use Starlink?

Probably not. SpaceX has been focusing on bringing Starlink to areas with slow internet, particularly in rural and remote regions of the world. So we expect SpaceX to prioritize users in those locations first. There’s also little reason for Starlink to try and compete against major ground-based internet service providers, which can offer high-speed internet plans at closer to $50 a month.

SpaceX CEO Elon Musk has pointed out the satellite technology would struggle to supply enough internet bandwidth to users residing in heavily populated locations. “Starlink is great for low to medium population density. But satellites are not great for high-density urban,” he told Joe Rogan in a February interview. “So you’re actually better off having 5G for that.”

Can You Game on Starlink?

Yes, on YouTube, you can find numerous videos of Starlink users playing games such as Counter-Strike: Global Offensive on the service. There may be some lag, especially as your connection hops from one Starlink satellite to another, but users report the experience is playable.

Do You Own Your Starlink Dish?

Yes, you own the dish and the Wi-Fi modem once it’s delivered, according to the Starlink terms of service. You can return the equipment for a full refund within 30 days after you receive it.

Is it Easy to Install? What if I Live in the Woods?

Users say the equipment usually takes around five minutes to set up. No technician is needed. But you’ll need to make sure the Starlink dish has a clear view of the sky in order to receive the high-speed internet. So it could take longer to set up if you need to place the dish on your home’s roof.

To help you place the dish, SpaceX’s mobile app for Starlink (available for iOS and Android) has a “field of view” analyzing function, which taps your phone’s camera to find an optimal view of the sky around your home.

“The best guidance we can give is to install your Starlink at the highest elevation possible where it is safe to do so, with a clear view of the sky. Users who live in areas with lots of tall trees, buildings, etc. may not be good candidates for early use of Starlink,” the company added in its FAQ. “However as more satellites are launched, the field of view constraints will decrease, enabling a wider variety of users.”

Recommended by Our Editors

We’ve seen users come up with creative ways to position a dish above the trees near their homes. The Starlink dish comes attached to a 100-foot cable, although users have found ways to extend its reach.

Can I Use My Starlink Dish at Another Location? What About on a Car?

But the company does plan on lifting the limitation once it has enough satellites in orbit. “Mobility options—including moving your Starlink to different service addresses (or places that don’t even have addresses!)—is coming once we are able to increase our coverage by launching more satellites and rolling out new software,” the company said in a November Reddit AMA.

As for cars, the company is seeking FCC clearance to start bringing the Starlink dish technology to moving vehicles, including boats and aircraft.

Are There Any Data Caps?

Nope. At least not yet. “So we really don’t want to implement restrictive data caps like people have encountered with satellite internet in the past,” the company said in that AMA. “Right now we’re still trying to figure a lot of stuff out—we might have to do something in the future to prevent abuse and just ensure that everyone else gets quality service.”

This Sounds Too Good to Be True. Will Starlink Change Once Customers Are Locked In?

A reader sent me an email with this very worry. In response, I couldn’t help but think of this quote: “You either die a hero, or you live long enough to see yourself become the villain.”

It would be ironic if decades from now people are complaining about SpaceX imposing data caps or charging too much for service. But for now, subscribers hail Starlink as a game-changer the rural internet market desperately needs. Starlink is also bound to face some competition in the coming years from Amazon and other satellite internet providers ready to invest in the technology. One day, consumers may have multiple fast satellite internet system options.

Where Can I Learn More About Starlink?

SpaceX has almost never replied to our questions about Starlink. Elon Musk also has a contentious relationship with the media. So to cover Starlink, we’ve had to largely rely on Musk’s Twitter feed, the YouTube videos SpaceX uploads about Starlink launches, and the filings the company regularly makes to the FCC.

One great, non-official resource is the Reddit community for Starlink. Here, you can find actual users of Starlink, who often post about their experiences with the service, and answer questions. The Reddit page also contains its own community-driven FAQ about Starlink, which is chock full of details.

Have You Reviewed Starlink?

Unfortunately, no. But we’re hoping to get access one day.