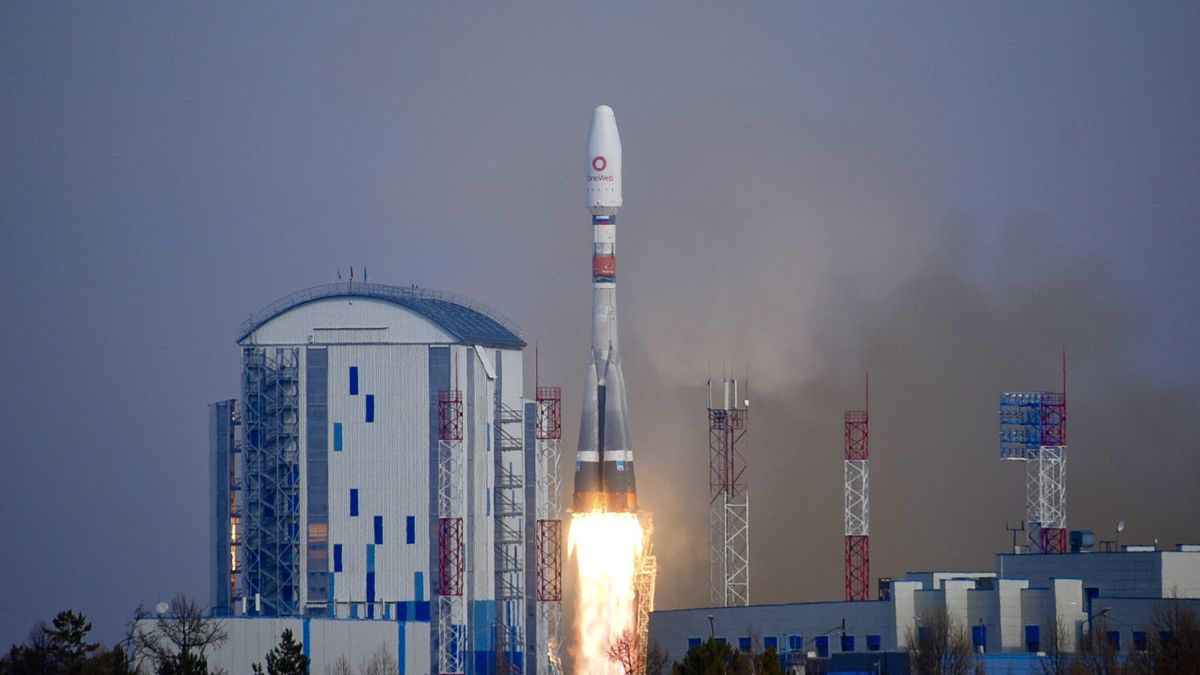 The Soyuz-2.1b carrier rocket with the Fregat upper stage and 36 spacecraft lifted off from the Vostochny Cosmodrome. (Image credit: Roscosmos)Image 3 of 6

OneWeb now has 146 satellites in its constellation after the fifth launch on March 24, 2021, when a Soyuz rocket delivered another 36 satellites to orbit. (Image credit: Arianespace)Image 4 of 6

A Soyuz rocket arrives at the launch pad at the Vostochny Cosmodrome in Siberia ahead of its planned launch of 36 OneWeb satellites in March 2021. (Image credit: Arianespace)Image 6 of 6

This Arianespace image shows how OneWeb’s 36 internet satellites are stacked for launch on a Soyuz rocket ahead of a March 24, 2021 liftoff. (Image credit: Arianespace)

A Soyuz rocket successfully sent 36 OneWeb satellites into orbit Wednesday (March 24) as the London-based company continues its recovery from a tough 2020.

OneWeb satellites should have begun to deploy in groups of four beginning at 12:05 a.m. EDT (0405 GMT on Thursday, March 25), with the ninth and final group expected to deploy at 2:38 a.m. EDT (0638 GMT), if all goes according to plan. The satellites will circle Earth in a near-polar orbit at an altitude of roughly 280 miles (450 kilometers), which is slightly higher than the tilted equatorial orbit of the International Space Station.

This was the fifth launch for OneWeb overall. The satellite constellation, still under construction, aims to offer access to the Internet in remote areas using multiple Internet protocols, including 3G, LTE, the newest generation 5G (which enables the Internet of Things) and Wi-Fi, according to launch provider Arianespace.

OneWeb “is focused on scaling the satellite constellation to launch commercial services starting at the end of 2021 to the UK, Alaska, Canada, northern Europe, Greenland, Iceland, and the Arctic seas,” Arianespace wrote in a mission description.

OneWeb had originally planned to put 48,000 satellites into orbit, but after a tough 2020 it filed a request with the Federal Communications Commission (FCC) in January proposing 6,372 satellites.

The company, which filed for Chapter 11 bankruptcy a year ago shortly after the coronavirus pandemic erupted, told the FCC that the revision “demonstrates the commitment and vision” of its new owners, which are the British government and Indian telecom company Bharti Global. The goal is to deploy “a cost-effective, responsible, and groundbreaking satellite network to deliver global broadband,” according to the filing, which was quoted by Space News in January.

A release by OneWeb announcing the new launch said the company is now “hiring at a fast pace” — with 200 new employees coming in since last fall — as the company builds a global ground station network. It pointed to a $73 million contract with Intellian for user terminals, and another contract (for an undisclosed amount) with Satixfy for Wi-Fi terminals on aircraft.

“OneWeb Satellites, a joint venture with Airbus, is manufacturing the satellites and has returned to full production,” OneWeb added, saying it has secured global priority spectrum rights with the International Telecommunications Union to support the growing constellation.