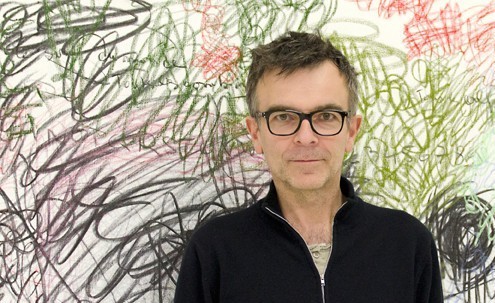 Fabrice Hyber with his painting Emmêlé, 2011.

French artist Fabrice Hyber has built a crazy, playful world of hybrids and mutations in his sculptures, paintings, performances, films, video games, installations, and furniture. He calls his work “rhizomatic”—a scientific term referring to an underground root system, and also a philosophical concept used by Gilles Deleuze and Félix Guattari to define nonlinear thought existing on multiple levels, with no beginning or end.

Born in Luçon, France, in 1961, Hyber studied art in Nantes in the early 1980s, where he began exploring philosophical questions about engineering, ecology, and biology. One of his earliest works proposed an utterly impossible architectural scheme to lower sea levels and reunite the continents into a single land mass. And in 1989 he began his extensive series “L’Homme de Bessines”—public fountains in the form of multiple little green men, about 34 inches high, their bodies covered with tiny holes that spit out thin streams of water.

A couple years later, Hyber executed another lofty project: He made the world’s biggest bar of soap. Weighing 22 tons and molded in the back of a truck, it was entered in the Guinness Book of World Records. That accomplishment was part his ongoing series of “POFs” (Prototypes of Functioning Objects), absurd and witty brainteasers that subvert the usage of familiar things: a square soccer ball, a staircase- seesaw hybrid, a diving mask with the glass replaced by an inward-facing mirror. Several “POFs” were even highlighted in a classical dance performance. In Hyber’s “chaosgraphy,” as he labeled his choreographic technique, the objects interfered with a ballet set to Vivaldi’s Four Seasons, creating anarchy.

Hyber was chosen to represent France at the 1997 Venice Biennale. In keeping with his image as an artist/poet/philosopher/provocateur, he made Eau d’or, eau dort, odor. The French Pavilion, which looked almost empty, was transformed into a working recording and TV studio, where the public could freely produce and broadcast programs on the local airwaves. For this, he became the youngest artist to win the Golden Lion award.

Over time, the themes found in his bizarre garden-gnome fountains—the repetition of forms, with references to the body, the ecological movement, and the color green—have become more pronounced, with his art taking on an activist stance. Through his collaborations with prominent scientists—studying, for instance, stem-cell transformation with Robert Langer from MIT—he has developed a visual vocabulary that mixes art and science, as seen in his “Homeopathic Paintings,” which look like scribbles on a blackboard in a French biology class.

The combination of science, art, and activism became explicit in The Artery, perhaps Hyber’s most ambitious work to date, a 3,300-square-foot pathway installed in 2006 in the La Villette neighborhood of northern Paris. The work was commissioned by the French AIDS organization Sidaction, for which Hyber had conceived an “anti-monument” of 10,000 painted ceramic tiles. The artist describes it as “a tattooed skin, a work where you can lose yourself, the way you lose yourself in the illness. Like the virus, the drawing proliferates in a movement that is both vital and fatal.”

Hyber lives and works in Paris, where he is represented by Galerie Jérôme de Noirmont. He maintains five studios inside and outside Paris and, “à la Warhol,” always has at least five or six assistants or collaborators. Over the past few years, he has shown in such far-flung places as Japan, China, Poland, and Siberia, and this fall he will present a number of simultaneous, highly visible projects in France.

In addition to inaugurating his own online television channel, Hyber will open an art school called Les Réalisateurs in Nantes, with proposed satellite schools in Cambridge, Stuttgart, Hamburg, and Singapore. A savvy businessman with his own corporation since the mid-1990s, Hyber plans to pair students with businesses for collaborative projects. Also in the fall, he will unveil an enormous mural, about 26 feet wide and 60 feet high, at the Institut Pasteur in Paris, for which some 1,000 rectangular tiles are currently being painted at the renowned Sèvres porcelain factory.

In September, Hyber will be the first artist to have a monographic exhibition in the newly renovated underground space of the Palais de Tokyo. And opening in October are solo shows at the Maeght Foundation in Saint-Paul-de-Vence and at the MAC/VAL contemporary-art museum in the Parisian suburb of Val-de-Marne. Each of these exhibitions will explore a different aspect of Hyber’s art, continuing to dazzle his audience and make it impossible for them to classify his work.

Laurie Hurwitz is the Paris correspondent for ARTnews.