The K-T boundary separates the age of reptiles and the age of mammals, which was first recognized over one hundred years ago by geologists who realized that there was a dramatic change in the types of fossils deposited on either side of this boundary.  This boundary also separates two of the three eras of the Phanerozoic (see time scale at left), which is the time in Earth history that began with the origin of complex life and extends to the present.  These two eras are called the Mesozoic and Cenozoic. Dinosaurs were prevalent during the Mesozoic Era and extinct during the Cenozoic Era.  The last segment of the Mesozoic Era, from 135 to 65 millions of years ago, is called the Cretaceous Period.  The first segment of the Cenozoic Era, from 65 million years ago until the present, has historically been called the Tertiary Period. The abbreviation for the boundary between the Cretaceous and Tertiary periods is the K-T boundary, where K is the abbreviation for the German form of the word Cretaceous.

This boundary corresponds to one of the greatest mass extinctions in Earth’s history.  At least 75 percent of the species on our planet, both in the seas and on the continents, were extinguished forever. The most famous of the vanquished are the dinosaurs.  However, these giants were only a small fraction of the plants and animals that disappeared. In the oceans, more than 90 percent of the plankton was extinguished, which inevitably led to the collapse of the oceanic food chain. 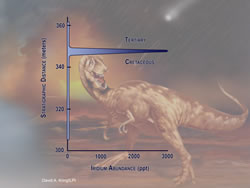 Rocks deposited during the Cretaceous Period and Tertiary Period are separated by a thin clay layer that is visible at several sites around the world.  An example is illustrated on the far left, where David Kring is pointing to a K-T boundary exposure in Colorado.  A team of scientists led by Luis Alvarez (a Nobel Prize-winning physicist), his son Walter (a geologist), and two colleagues, Frank Asaro and Helen Michel, discovered that the clay layer contains a strikingly high concentration of iridium (see diagram with iridium anomaly to the right), an element that is much more common in meteorites than in Earth’s crustal rocks. Like meteorites, asteroids and comets also have relatively large abundances of iridium.  Consequently, they proposed that an impacting asteroid or comet hit the Earth, generating the iridium anomaly, and causing the mass extinction event (Science 208, 1095-1108, 1980).  Their report of an iridium anomaly was immediately confirmed by several different laboratories, in some cases analyzing other K-T boundary sites in the world:  Jan Smit and Jan Hertogen (Nature 285, 198-200, 1980); Ramachandran Ganapathy (Science 209, 921-923, 1980); and Frank Kyte, Zhiming Zhou, and John Wasson (Nature 288, 651-656, 1980).  The discovery of high iridium concentrations in K-T boundary sediments at several places around the world suggested the impact was a large one.

Although the K-T boundary has been the common name for the extinction event for decades, some geologists have argued the name should be changed. They prefer to dismiss the term Tertiary and replace it with the term Paleogene. Thus, you will sometimes read about the K-Pg mass extinction event. A diagram with this new terminology is illustrated to the right.