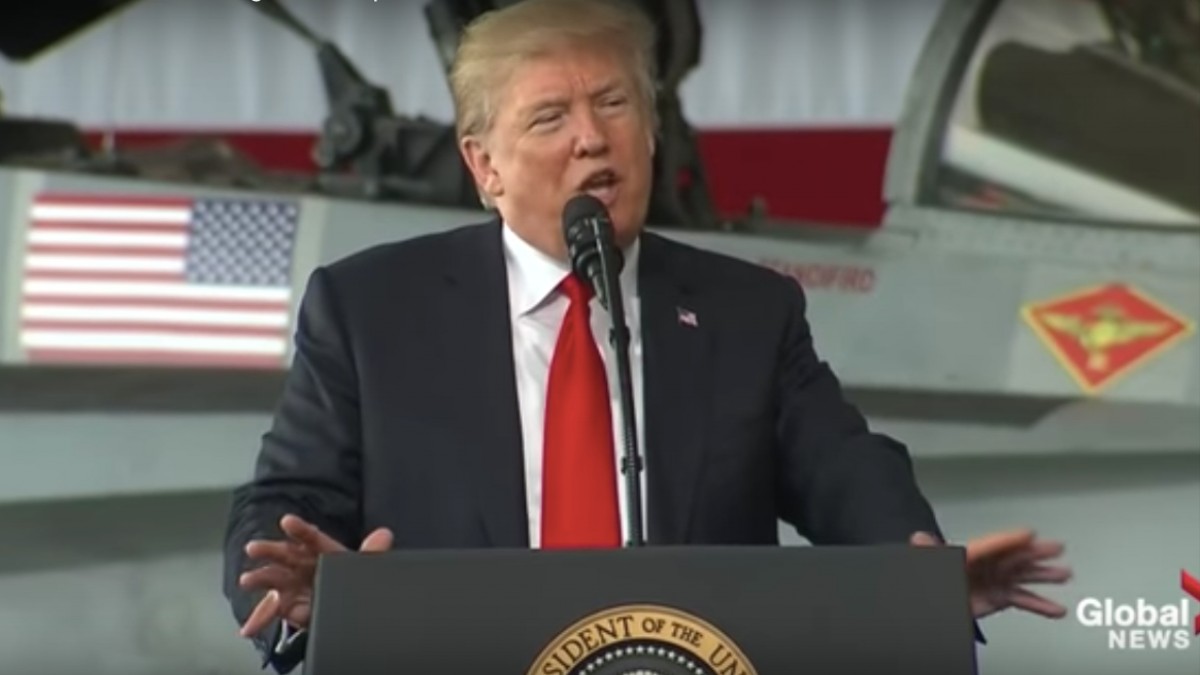 “My new strategy for space recognizes that space is a warfighting domain, just like the land, air, and sea,” Trump said. “You know I was saying it the other day, because we are doing a tremendous amount of work in space. I said, ‘maybe we need a new force, we can call it the Space Force,’ and I was not really serious, and then I said, ‘what a great idea, maybe we’ll have to do that. That could happen. That could be the big breaking story.’”

Trump didn’t belabor the specifics, but many commentators presume he is referring to a proposal introduced by the US House Armed Services Committee in June 2017, which suggested creating a sixth branch of the US Air Force called the US Space Corps.

The rationale for this move, according to committee members Mike Rogers (R-AL) and Jim Cooper (D-TN), is that the Department of Defense is not responsive enough to issues of national security, missile defense, and nuclear development in outer space, necessitating the creation of a new Corps entirely devoted to keeping pace with those challenges. The currently existing Air Force Space Command, they argued, should have its own authority, rather than remain a subcommand of the Air Force.

“There is bipartisan acknowledgement that the strategic advantages we derive from our national security space systems are eroding,” Rogers and Cooper said in a statement. “Not only are there developments by adversaries, but we are imposing upon the national security space enterprise a crippling organizational and management structure and an acquisition system that has led to delays and cost-overruns.”

“Therefore, our Mark will require the creation, under the Secretary of the Air Force, of a new Space Corps, as a separate military service responsible for national security space programs for which the Air Force is today responsible,” the pair said. “We view this as a first, but critical step, to fixing the National Security Space enterprise.”

There are, indeed, many complex and pressing issues concerning the militarization of space. Among the biggest problems is the increasing deployment of dual-use spacecraft—these missions may be officially tasked with benevolent jobs like satellite repair, but they are also capable of tampering with, or even destroying, the space infrastructure of rival nations.

The vulnerability of spacecraft to hacks and cyberwarfare is another major threat that US national security experts need to anticipate. And Russian President Vladimir Putin’s recent sabre-rattling about his new space missile program, which was announced alongside an animation depicting a direct attack on Florida, likely alarmed US nuclear and missile defense specialists.

For the moment, however, these space-related military concerns won’t be resolved by an independent Space Corps. Though the proposed bill passed the House last year, it died in the Senate after opposition from military leaders like Defense Secretary James Mattis, who called the idea of a Space Corps “premature” and Air Force Secretary Heather Wilson, who said a separate Corps would create ungainly bureaucracy.

Those in favor of an independent Space Corps, including NASA astronaut Terry Virts, have held out hope. Virts argued that the skillsets of astronauts and space militarization experts are vastly different from those of aviation specialists and Air Force pilots, and that this reality warrants a new governmental entity. Perhaps Trump’s speech on Tuesday portends that a Space Corps—or in his words, Space Force—will reemerge as a military priority again soon.

Get six of our favorite Motherboard stories every day by signing up for our newsletter.