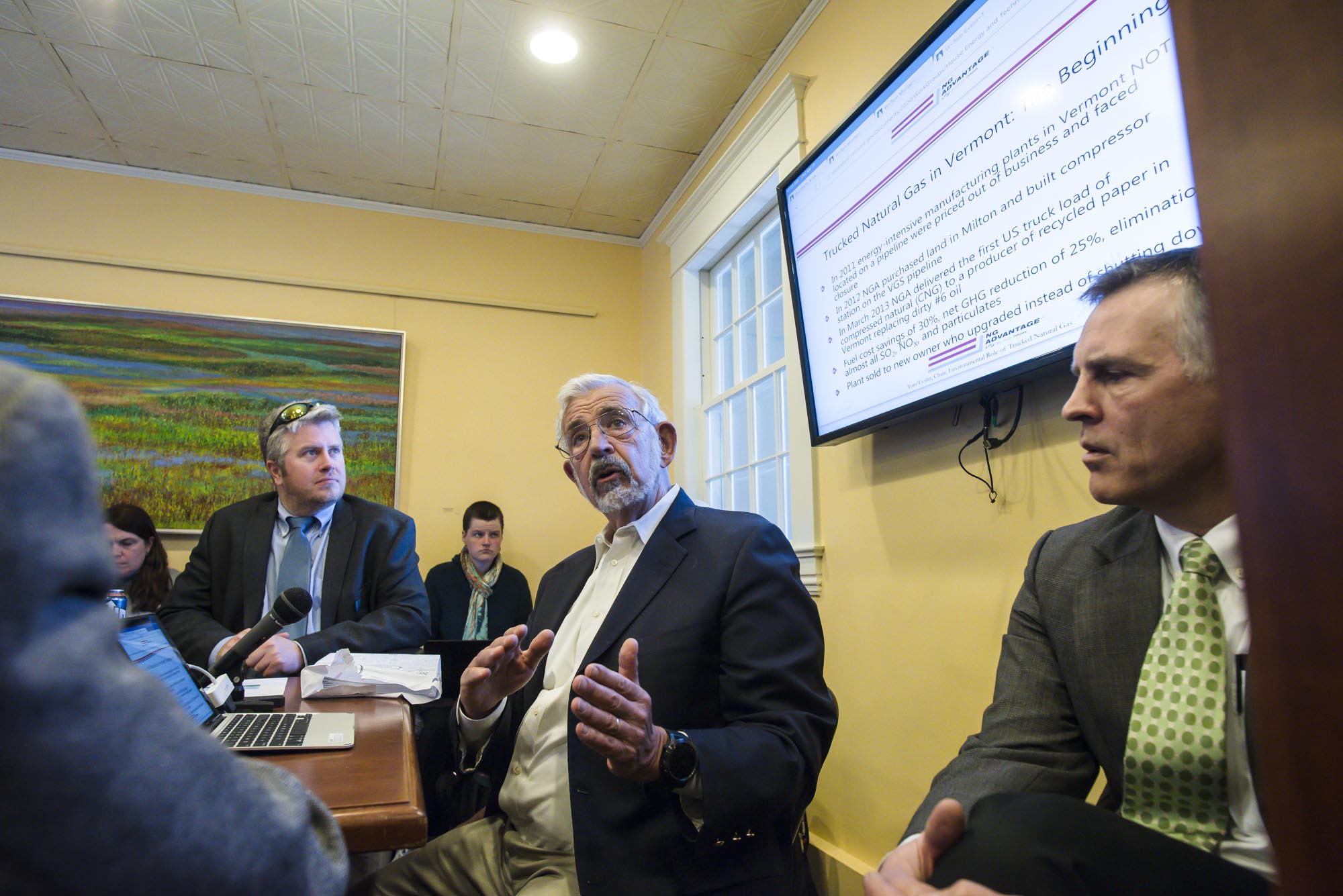 Some Vermonters who can afford it are turning to Starlink, a new satellite internet service offered by SpaceX, Elon Musk’s company. Interest in the new service is outpacing availability, with Vermonters who want the service adding their names to a waiting list.

Early adopters of the technology, including Tom Evslin of Stowe, say the state should make sure low-income Vermonters can tap into the technology, too. Evslin is a semiretired internet technology entrepreneur who was once the state’s chief technology officer.

The Starlink satellite dish costs $499. The total price tag is nearly $600 with shipping and Vermont taxes. Then, there’s the ongoing cost of $100 a month for service.

Evslin installed the technology at his home five weeks ago and so far, he said, it’s been working well. The speed is “incredible,” Evslin said, although there are still some kinks to work out — like a pesky branch that blocks the satellite reception, causing a five- to 10-second delay in service about once an hour.

Despite those blips, Evslin thinks Starlink could be a step forward for the state — which has been struggling to ensure every address in Vermont has access to good internet service. Covid relief projects knocked down the number of addresses in the state that lack service from 70,000 to 61,000.

Vermont’s chronic broadband issues have been greatly amplified by the pandemic, with thousands of students expected to attend classes through an internet connection, and many adults working from home. In parts of the state, those internet connections are patchy, slow or nonexistent.

Broadband service is provided mainly through fiber optic cable, and reaching homes that are far up a rural dirt road can be expensive — it can cost $20,000 to reach one home. Private companies stand to lose money in sparsely populated areas.

Starlink, on the other hand, relies on satellite technology. Every 90 minutes, a satellite orbits around the Earth, reaching rural areas without land-based infrastructure.

“The satellite serving me now is going to be off the Horn of Africa in 45 minutes,” Evslin said.

VTDigger is underwritten by:

As one satellite passes out of the range of a particular antenna, another comes into view so that the service — when it’s operating properly — isn’t disrupted. Still, some people are reporting delays.

“I think what it does is it turns the problem of availability into a problem of affordability,” Evslin said.

That’s a problem that Evslin and others say the state should be able to address. With more than 1,000 satellites already in service, Starlink can be a much more immediate solution to Vermont’s problem. It would take years to build out the infrastructure needed for a wired connection, like fiber.

“To say ‘let’s wait three to four years’ is unconscionable when we do have an alternative,” Evslin said.

Others in the state agree, especially when it comes to providing service for Vermont students who may be falling because they don’t have broadband.

Jock Gill, chair of the energy committee in Peacham, said access to high-speed internet is essential to prevent students from falling behind in school.

“We need as many tools in the connectivity toolkit as we can lay our hands on because the problem is complicated,” Gill said.

Lawmakers and others, however, are skeptical that the service is the solution to Vermont’s broadband problem.

‘Not ready for prime time’

Not all Starlink reviews have been rosy. Christine Hallquist, administrator of the Northeast Kingdom Communication Union District, has had Starlink at her home in Wolcott for the past month. Like Evslin, she got the beta version of the technology.

When she bought her home in Wolcott last year, there was no service at all.

“Not even a phone connection,” Hallquist said. “This is poetic justice, being the administrator of NEK broadband. If I can’t get it in here, then nobody can.”

The solution she’s settled on contains many tools. Beyond Starlink, Hallquist also uses DSL and a fixed wireless antenna.

But Starlink has been the source of some frustration. Sometimes, the service drops out unpredictably.

“It’s certainly not ready for prime time from my perspective,” Hallquist told VTDigger.

VTDigger is underwritten by:

For Hallquist, service has been faster at night than during the day. While daytime speeds sag at 20 megabits per second download and 2 or 3 upload, at night it revs up to 100 mbps down and 25 up.

Hallquist has Starlink mounted on her roof, so there’s no risk of obstacles getting in the way. In Vermont, Starlink needs a clear view of the north sky. Steep mountains and trees can block reception.

“We don’t yet know what’s going to happen when the leaves return to the trees,” Clay Purvis, director of the Vermont Department of Public Service telecommunications and connectivity division, told lawmakers at a hearing about Starlink held last week.

“I’m skeptical as I’ve been using it,” Hallquist said, and she wanted to warn others to be careful about the company’s promises.

Still, Hallquist hopes Starlink will succeed. She doesn’t see the Starlink as a competitor to the communications union districts, but a complement that could help them reach their goal of coverage at every Vermont address. Satellites can offer service to a limited number of customers, while the capacity of fiber optic cables is much greater, Hallquist said.

“We CUDs should not be threatened by good technology solutions,” she said.

Hallquist said state subsidies are a “must” in making this technology accessible to everyone.

State officials are still evaluating the newly emerging technology to determine how it might fit into the state’s efforts to ensure all Vermonters have good access to the internet.

Lt. Gov. Molly Gray said Starlink could “potentially” be a part of the state’s approach to addressing broadband but the conversation should be more focused on Vermonters who need essential services. rather than on specific providers.

“We are almost one year into this pandemic, and there is a significant population of our state that has not been able to access telehealth, online learning, remote work, economic opportunity, basic health and safety information, or even a growing digital democracy in Vermont,” she said.

Gray has met with Starlink officials and Rep. Timothy Briglin, D-Thetford, who chairs the House Committee on Energy and Technology, as well as U.S. Rep. Peter Welch, who is head of the rural broadband caucus.

“Over the last couple of months, what we’ve seen is a shift where Vermonters who haven’t had access are taking access into their own hands and purchasing services,” Gray said.

But some lawmakers are wary of any partnership with the private company. Last week, the company declined an invitation to testify at a House Energy and Technology Committee hearing last Friday about Starlink.

That left Purvis to do the talking.

“It provides an immediate benefit to rural Vermonters,” Purvis said. “It’s not going to solve all the world’s connectivity problems.” Still, for some, it’s better than what they had.

“We were all waiting for our fiber, and someday we’ll get it, but in the here and now, this could be a solution that allows people to do the kinds of things they need to do on the internet today,” he said.

Still, there are limitations, such as the capacity of the satellites. Starlink can provide service to about 50 customers in a “cell.” Cells don’t match up with political boundaries, but one cell covers about two towns.

Some lawmakers said they had serious reservations about working with the company, given the past failure of private providers to reach end-of-the-road addresses in the state. Others were hesitant about solutions that wouldn’t work for everyone.

“Adding another entrant who is not looking at universality or is not able to be held accountable to Vermonters, I have less than zero interest in facilitating or seeing the state facilitate that,” said Rep. Laura Sibilia, I-Dover.

Sibilia pointed out that Starlink has already received nearly $1 billion in federal money to provide service across the country, and she questioned the use of public dollars.

“It’s very clear publicly that this project is at least in some part being undertaken to fund Mr. Musk’s trip to Mars,” she said.

Purvis said it could be possible to reimburse Vermonters who rely on Starlink, rather than providing a subsidy to the company. He said the Department of Public Service has been in contact with Starlink and is reviewing the data, which is protected by a nondisclosure agreement.

So far, the state’s meetings with the company have been “purely informational” and there is “nothing definitive in the works,” Purvis said.

At last week’s hearing, Rep. Mike Yantachka, D-Charlotte, had doubts, too. “We think this technology is too young for us to actually consider it as a viable solution in Vermont,” he said.

Rep. Avram Patt, D-Worcester, said he was “very troubled” by what he sees as the piecemeal approach taken by both the state and federal governments.

“I’m not a Starlink salesman,” Purvis replied. “I don’t think we’re going to ever have an internet option that’s perfect for everyone.”

Starlink did not respond to a request for comment on this story. Neither the number of current Starlink users in Vermont or the number of residents on the waiting list is available.

CORRECTION: An editor introduced a disclosure error. Tom Evslin is no longer on the board of the Vermont Journalism Trust, parent company of VTDigger.

Missing out on the latest scoop? Sign up here to get a weekly email with all of VTDigger’s reporting on politics. And in case you can’t get enough of the Statehouse, sign up for Final Reading for a rundown on the day’s news in the Legislature.