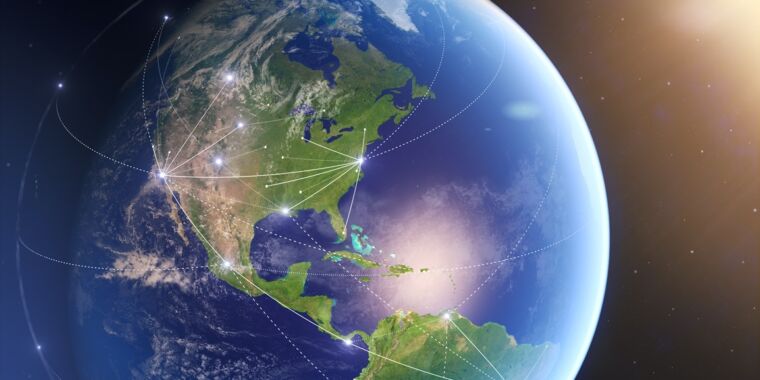 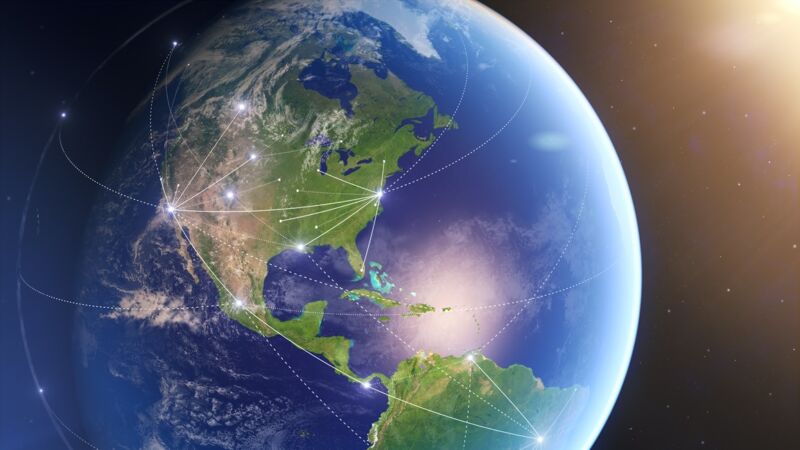 SpaceX and Dish Network are fighting at the Federal Communications Commission over Dish’s attempt to block a key designation that SpaceX’s Starlink division needs in order to get FCC broadband funding.

A SpaceX filing submitted yesterday said that Dish’s “baseless attempt” to block funding “would serve only to delay what matters most—connecting unserved Americans.” While Dish says it has valid concerns about interference in the 12 GHz band, SpaceX described Dish’s complaint to the FCC as a “facially spurious filing” that “is only the latest example of Dish’s abuse of Commission resources in its misguided effort to expropriate the 12 GHz band.”

The dispute is related to several FCC proceedings including one on a Starlink petition seeking designation as an Eligible Telecommunications Carrier (ETC) under the Communications Act. SpaceX needs this legal designation in some of the states where it won federal funding to deploy broadband in unserved areas. Dish asked the FCC to deny SpaceX the needed status in the 12 GHz band.

SpaceX was tentatively awarded $885.51 million over 10 years from the FCC’s Rural Digital Opportunity Fund (RDOF) but still needs final approval from the FCC, both for the ETC status and the funding itself. SpaceX’s funding would require it to deploy broadband to 642,925 homes and businesses in 35 states. For practical purposes, the money would partially subsidize SpaceX’s costs for deploying its low-Earth-orbit satellite network that could serve rural areas throughout the US, not just for those 642,925 locations. Some lobby groups representing small Internet service providers also objected to SpaceX’s funding.

Dish is a satellite-TV provider rather than a home-Internet provider, and it did not bid in the RDOF auction. But Dish is building a 5G mobile broadband network that could eventually use spectrum from the 12 GHz band that Dish already uses for satellite TV. With SpaceX also using 12 GHz frequencies, Dish says it is worried about interference.

Dish filed a petition last week asking the FCC to deny SpaceX’s request for ETC status in the 12.2-12.7 GHz band, while saying it “does not object to ETC status for SpaceX based on its access to other frequency bands.” Starlink’s ETC status for 12 GHz “should be denied or deferred, pending the resolution of the DBS [Direct Broadcast Satellite] interference concerns arising in that band from SpaceX’s proposed modification of its satellite system, and the sharing questions presented in the Commission’s recently initiated 12 GHz rulemaking,” Dish said.

As Dish’s petition noted, SpaceX intends to “fly its satellites at less than half” the originally planned altitude—540 km to 570 km instead of 1,110 km to 1,325 km—”and transmit to the US at close to half the elevation angle.” Dish said it commissioned a study using SpaceX’s own data to show that the change “could imperil DBS transmissions in the 12 GHz band.”

Dish told the FCC that SpaceX’s plan “would adversely affect reception at DBS consumer dishes and that the system as modified would exceed the applicable power limits under International Telecommunication Union and Commission rules. In other words, SpaceX would not be able [to] use the 12 GHz band to meet its RDOF obligations if such service interferes with DBS operations.”

SpaceX disputed Dish’s claim about power limits, saying that “Dish and its paid consultant allege only that they would have used different parameters if they ran SpaceX’s network and the way they would run it could violate [power flux-density] limits.”

In 2016, a Dish-led coalition asked the FCC to let 5G mobile services operate in the 12 GHz band. In response, the FCC in January 2021 issued a Notice of Proposed Rulemaking that seeks public input on “whether the Commission could add a new or expanded terrestrial Mobile allocation in the 12 GHz band without causing harmful interference to incumbent licensees.” Dish wants the FCC to delay any decision on Starlink’s ETC status until this proceeding resolves spectrum-sharing concerns.

“As for the 12 GHz rulemaking, the Commission is considering allowing two-way mobile 5G service in the band, which, depending on the final outcome, could limit SpaceX from using the band as SpaceX proposes,” Dish told the FCC.

SpaceX has opposed mobile use in the 12 GHz band.

“Because SpaceX is using the 12 GHz Band for downlinks from SpaceX satellites to consumer terminals, any action to degrade the utility of the 12 GHz Band will directly harm consumers in the near term,” SpaceX told the FCC in June 2020. “By contrast, the theoretical terrestrial services proposed in the 2016 Petition are at best years away from deployment and, if ever deployed, are likely to track the same geography as today’s terrestrial networks.”

SpaceX’s filing yesterday said that Dish’s real purpose is “to obstruct the ETC designation and RDOF processes as part of Dish’s larger efforts to hamstring a competitor and to commandeer valuable spectrum already being used to serve American homes and businesses.”

“Dish presents no valid basis on which to deny or defer Starlink Services’ ETC designation,” SpaceX told the FCC. “To the contrary, doing so would serve only to impede Starlink Services’ ability to meet its RDOF public interest obligations. Even more importantly, it would delay the provision of high-quality voice and broadband service to many of our nation’s hardest-to-serve communities, which have gone unconnected for far too long already.”

SpaceX also argued that Dish’s complaints are too late because the FCC already decided to let ISPs use the 12 GHz band for offering subsidized broadband. SpaceX pointed out that its application for a change to its satellite system “was filed months before” the FCC adopted procedures for the RDOF auction. “Nonetheless, the Commission decided to include the 12 GHz band in the auction and to allow SpaceX to participate, even after a short-form review involving heightened scrutiny,” SpaceX said. “Dish’s argument now that its opposition to the modification somehow renders those Commission decisions meaningless is nonsensical.”

In the RDOF auction, SpaceX said, the FCC did not block use of the 12 GHz band because “that spectrum had already been allocated for NGSO [non-geostationary orbit] satellite use and licensed to a number of NGSO satellite systems for broadband service at the time the procedures were adopted.”

SpaceX said that Dish’s petition also ignored details of the 12 GHz spectrum-sharing proceeding in which, SpaceX said, “the Commission made clear that no new rules could be adopted unless the Commission could do so ‘without causing harmful interference to incumbent licensees’ such as SpaceX.” Additionally, “the fact that 12 GHz spectrum licenses are subject to future Commission rulemakings [does not] change anything for purposes of Starlink Services’ ETC Petition,” SpaceX said.

SpaceX has also battled with Amazon at the FCC over the companies’ dueling plans for satellite broadband.

Charter and Frontier face opposition, too

SpaceX is not the only big company facing opposition to its FCC funding. Lobby groups for small ISPs last week challenged funding tentatively awarded to Charter and Frontier. The reverse auction format resulted in funding awards that were lower than expected and won’t cover the actual deployment costs, the groups said. They claimed that Charter and Frontier may prefer to pay penalties to the FCC years down the road instead of actually finishing the required build-outs.

Charter and Frontier “appear to have utilized a strategy that calls into question a true desire to build out gigabit broadband,” the small-ISP groups said. The big ISPs “have bid and won areas, possibly with the intent to protect territory and hold competition at bay, perhaps viewing the payment of default penalties several years from now as a fair price to pay for warding off competition and keeping other providers from gaining access to funding to serve areas in need. Frontier poses the added concern of being in Chapter 11 bankruptcy, bringing into question its financial viability to deliver on its commitments.”

Charter is set to receive $1.22 billion over 10 years from the RDOF to bring service to 1.06 million homes and businesses in 24 states. The ISP has said it will put up most of the deployment money itself. “Charter expects to invest approximately $5 billion to support its buildout initiative—offset by $1.2 billion in support won from the RDOF auction—expanding Charter’s network to lower-density, mostly rural communities that do not have access to broadband service of at least 25/3Mbps,” Charter said.

Frontier is due to receive $370.9 million to deploy broadband to 127,188 locations in eight states even though it missed previous broadband-deployment deadlines. With the FCC having yet to make a final decision on each ISP’s funding, Sen. Shelley Moore Capito (R-W.Va.) urged the commission to reject Frontier’s funding in West Virginia.

The RDOF is paid for by Americans through fees imposed on phone bills. FCC Acting Chairwoman Jessica Rosenworcel objected to the auction going forward when Republican Ajit Pai was chairman, saying the FCC should have waited until it can collect more accurate broadband-mapping data. Rosenworcel hasn’t said whether she will make any major changes to the funding awards yet.