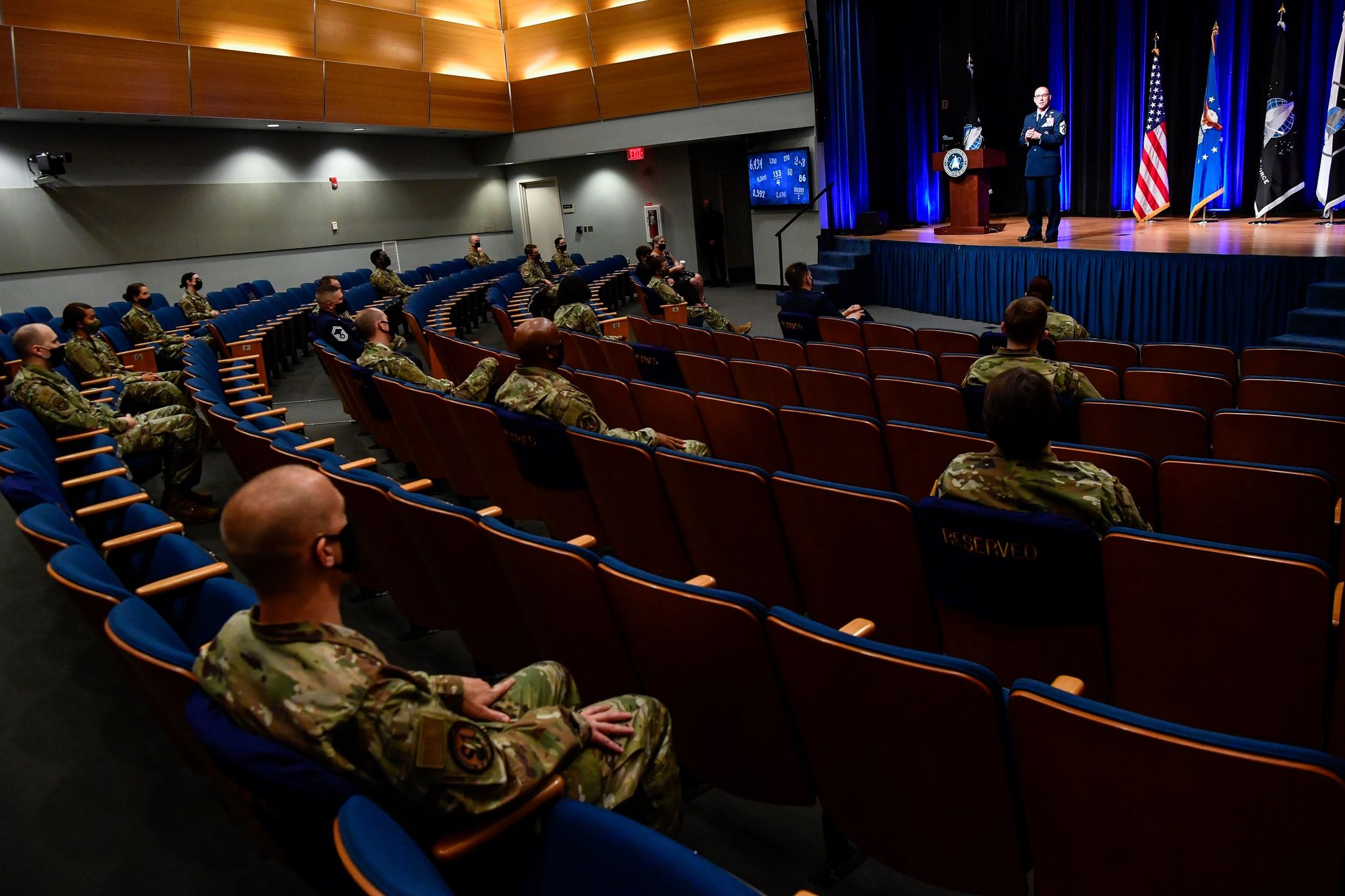 Chief Master Sergeant Roger Towberman said the Space Force is trying to balance tradition against a desire for innovation and for doing things differently.

WASHINGTON — The top enlisted leader of the U.S. Space Force compared the service to a startup that is trying to be “a little bit more adventurous” than the established branches of the military.

All military services share core principles and a “desire to win,” Towberman said. “We want the things that everybody wants,” he added. But as a new branch that is being built from the ground up, the Space Force is trying to balance tradition against a desire for innovation and for doing things differently.

Like a new startup company, “people are willing to take a little bit more risk,” he said.

The main responsibilities of the Space Force are to acquire and launch satellites, and to train people for the operation and protection of these satellites. By virtue of what it does, the Space Force wants to attract people with digital skills and a technological mindset. That means it has to be unconventional in its recruiting and hiring, Towberman said. “We want to find that person that can learn and is excited about serving, whether or not they’ve checked certain boxes,” he said. “This allows us to find diamonds in the rough. I’m excited about this concept.”

But Towberman cautioned that being a new service doesn’t mean completely departing from tradition.  In that vein, he defended the Space Force decision announced Jan. 29 that it would adopt most of the U.S. Air Force ranks for officers and enlisted personnel.

Based on feedback from troops, he said, “the more traditional rank structure is the way to go, but want to be bold in way we use them.”

Gen. David  Thompson, vice chief of space operations of the Space Force, said the discussion about ranks has been mischaracterized. The idea that ranks have a “deep impact on culture was way overemphasized and not supported in analysis,” Thompson said at the AFA forum. “People connect first with their service. A marine doesn’t tell you that they spent their career as a captain or as a corporal, they say they were a marine,” he added. “We connect with our missions and and the things that we do, which includes all ranks.”

Thompson also pushed back on criticism that the Space Force missed an opportunity to culturally depart from the Air Force by adopting the Air Force ranks. “This idea that because we’re going to change the rank structure, somehow it has some sort of cultural significance” has no basis in analysis, he said.

Thompson also explained why the service chose to name its members guardians, a name selection that was mocked as a knockoff of the “Guardians of the Galaxy” superhero film. The term guardian, said Thompson, “has deep heritage inside of the space community.” The Space Force was created from what used to be the Air Force Space Command, and their members were always known as the “guardians of the high frontier,” he said.

Selling Space Force to the public

One of the challenges for Space Force leaders has been explaining to the public what the service does and why it exists.

During an interview with astrophysicist and TV personality Neil deGrasse Tyson that aired at the AFA symposium, the chief of the Space Force Gen. John Raymond praised Tyson for his ability to turn complex ideas into easy to understand soundbites. “How would you suggest we communicate Space Force better to the American people?” Raymond asked.

Tyson’s suggestion was to get Saturday Night Live to do a sketch where things that are enabled by space and people take for granted — like GPS, cellphones and movie streaming — are taken away “and at the end they are in a cave sending smoke signals.”

This would not be marketing hype, said Tyson, because “everything you say that you can no longer do if you don’t have access to space would be true.”

Raymond said he liked that idea. “You work the invite, and I’ll stand with you on the SNL stage.”