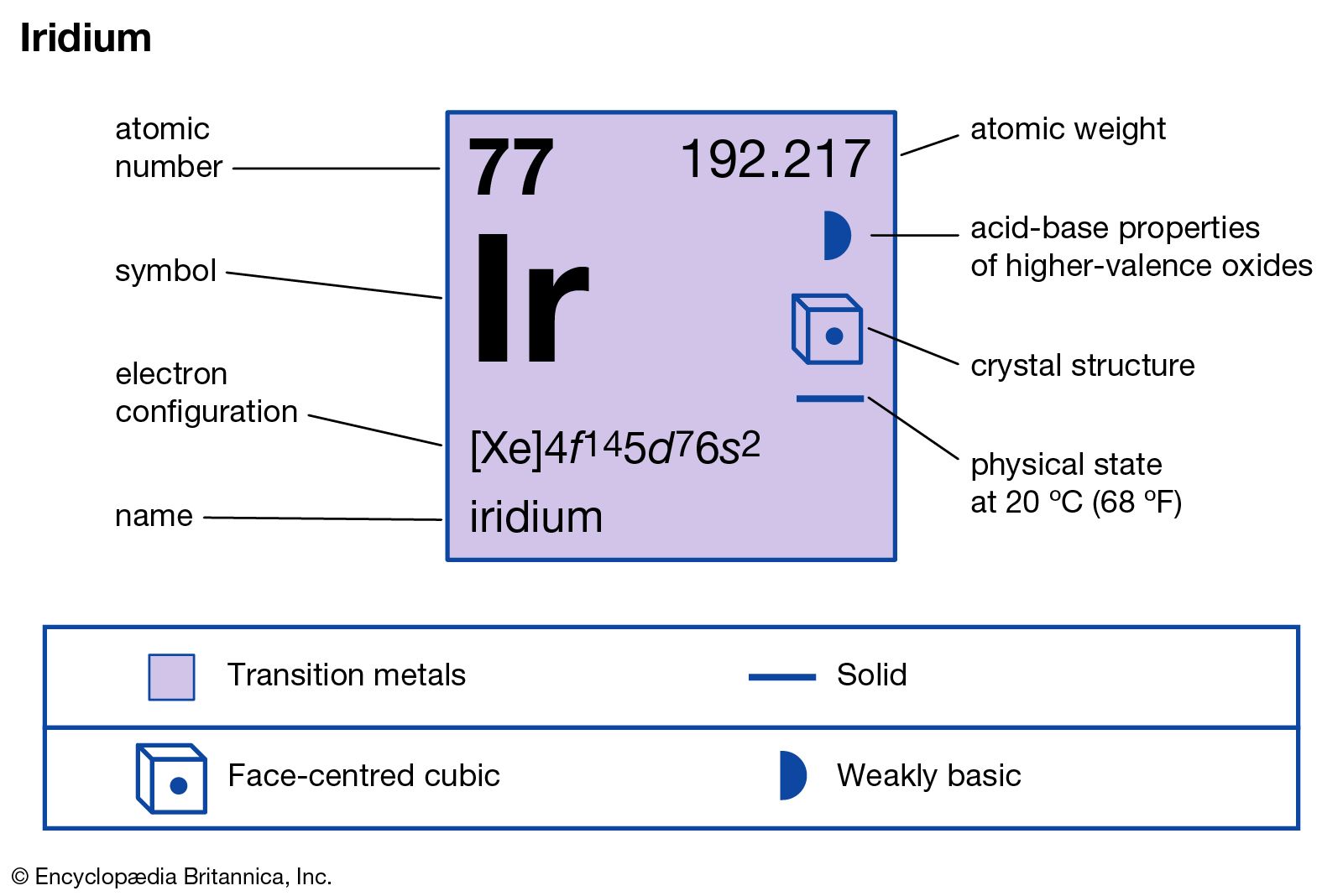 Iridium (Ir), chemical element, one of the platinum metals of Groups 8–10 (VIIIb), Periods 5 and 6, of the periodic table. It is very dense and rare and is used in platinum alloys. A precious, silver-white metal, iridium is hard and brittle, but it becomes ductile and can be worked at a white heat, from 1,200° to 1,500° C (2,200° to 2,700° F). It is one of the densest terrestrial substances. In the massive state the metal is practically insoluble in acids and is not attacked even by aqua regia. It can be dissolved in concentrated hydrochloric acid in the presence of sodium perchlorate at 125° to 150° C (257° to 302° F).

118 Names and Symbols of the Periodic Table Quiz

The periodic table is made up of 118 elements. How well do you know their symbols? In this quiz you’ll be shown all 118 chemical symbols, and you’ll need to choose the name of the chemical element that each one represents.

Because of difficulties in preparation and fabrication, the pure metal has few applications. Iridium is chiefly used in the form of platinum alloys. Platinum-iridium alloys (5 to 10 percent iridium) are readily workable metals that are much harder and stiffer and more resistant to chemical attack than the soft pure platinum. Such alloys are used for jewelry, pen points, surgical pins and pivots, and electrical contacts and sparking points. The international prototype standard kilogram of mass is made from an alloy containing 90 percent platinum and 10 percent iridium.

Pure iridium probably does not occur in nature; its abundance in the Earth’s crust is very low, about 0.001 parts per million. Though rare, iridium does occur in natural alloys with other noble metals: in iridosmine up to 77 percent iridium, in platiniridium up to 77 percent, in aurosmiridium 52 percent, and in native platinum up to 7.5 percent. Iridium generally is produced commercially along with the other platinum metals as a by-product of nickel or copper production.

Iridium-containing ores are found in South Africa and Alaska, U.S., as well as in Myanmar (Burma), Brazil, Russia, and Australia. In the late 20th century South Africa was the world’s major producer of iridium.

The element was discovered in 1803 in the acid-insoluble residues of platinum ores by the English chemist Smithson Tennant; the French chemists H.-V. Collet-Descotils, A.-F. Fourcroy, and N.-L. Vauquelin identified it at about the same time. The name iridium, derived from the Greek word iris (“rainbow”), refers to the various colours of its compounds. Natural iridium consists of a mixture of two stable isotopes, iridium-191 (37.3 percent) and iridium-193 (62.7 percent). The chemistry of iridium centres on oxidation states of +1, +3, and +4, though compounds of all states from 0 to +6 are known with perhaps the exception of +2. Complexes in oxidation state +1 chiefly contain carbon monoxide, olefins, and phosphines as ligands. The anions hexachloroiridate, [IrCl6]2−, and hexabromoiridate, [IrBr6]2−, are the only notable chemical species containing iridium in the +4 oxidation state. Iridium is somewhat more reactive than ruthenium and osmium.