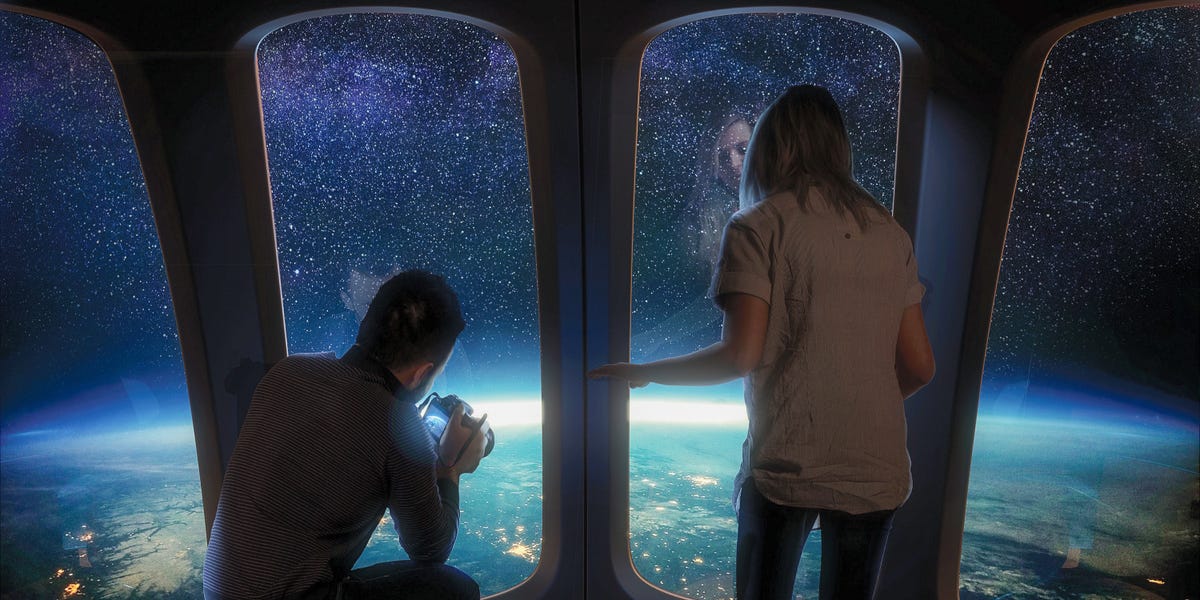 If you’re looking for a life-altering adventure, have more than $100,000 to spare, and are willing to wait a few years, a new startup called Space Perspective may have the ticket you.

The space tourism company came out of hiding on Thursday, and its business centers around planned flights of a nine-person “Spaceship Neptune” — a top-shaped crew capsule that’s surrounded by big windows, has a mini bar, and even comes equipped with a hidden lavatory. 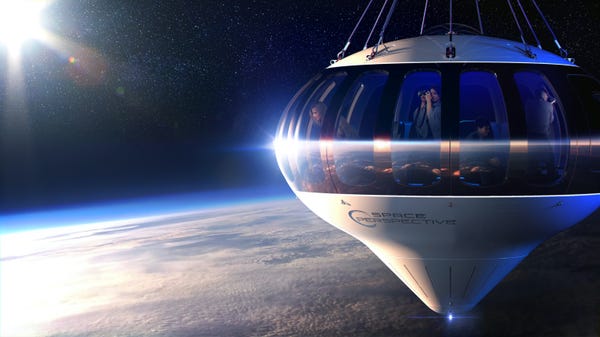 Ostensibly, the 10,000-pound capsule would launch from NASA’s Kennedy Space Center while dangling from the end of a high-altitude balloon pumped full of hydrogen gas.

After a two-hour ascent, Neptune would reach an altitude of nearly 19 miles and hover over the Atlantic Ocean for another two hours. That’s about 44 miles short of the Kármán line, which is what most researchers recognize as the edge of space(though there’s no consensus on the matter).

However, there is about 1% of the atmospheric pressure at 19 miles that is present on the ground, which is practically a vacuum, making it a potentially valuable platform for scientists to attach experiments, such as exposing materials to a space-like environment or sampling layers of the atmosphere on the way up and down.

Neptune should also soar high enough for a pilot and eight passengers or “Explorers” to see Earth’s curvature and soak in a view that, so far, has been afforded to only a few hundred space-flying humans. Launching before dawn would allow passengers to take in starry sights before seeing a unique sunrise.

“As Neptune glides along the edge of space, the sun slowly rises over the curved limb of Earth, scattering rainbow colors of light across the planet and illuminating the thin, bright blue line of our atmosphere,” Space Perspective’s website says of a flight. 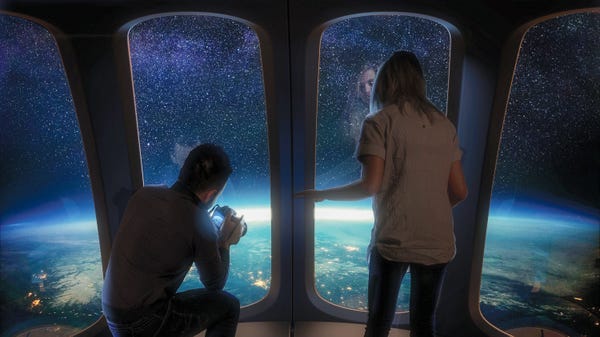 Passengers could look out floor-to-ceiling parabolic windows to take in views. They might also take turns poking their head into a glass viewing dome on top of the capsule.

Looking up, the sky would appear “completely inky black” and show the stars “like you’ve never before seen them,” according to the website.

While all of this is not yet real, it’s not a huge stretch to believe that it could be.

A major reason is the history of the new startup’s co-CEOs and cofounders, Jane Poynter and Taber MacCallum: a married couple who have years of experience launching both people and payloads high above the planet on the end of giant balloons. They’ve also tried this before, but business conflicts apparently stood in the way, not any insurmountable technical hurdles.

The ‘masters of the stratosphere’ 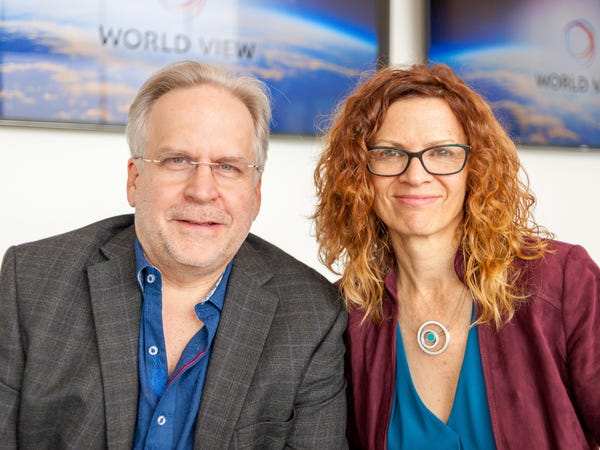 In a July 2018 feature about MacCallum and Poynter, Bloomberg Businessweek dubbed the duo “masters of the stratosphere,” and with good reason.

MacCallum and Poynter achieved fame in the 1990s for their two-year mission inside Biosphere 2, a grand experiment to see if a crew could sustain themselves within a sealed, miniature version of Earth that essentially functioned as a faux Mars colony.

While living in the 3.14-acre facility, the couple co-founded Paragon Space Development Corp, which specializes in life support systems and has supported dozens of missions to orbit. The company later flexed its technological muscle by helping send pilot, computer scientist, and former Google executive Alan Eustace on a world record-breaking flight and leap from a balloon lofted to about 25.75 miles high.

Amid that project, called StratEx, MacCallum and Poynter created a high-altitude balloon company in Tucson, Arizona, called World View Enterprises with Alan Stern, the principal investigator of NASA’s New Horizons mission to Pluto. The group worked with dozens of engineers and even a retired astronaut to build a business around launching payloads on hydrogen balloons high into the stratosphere, which ranges from 9 to 31 miles in altitude. 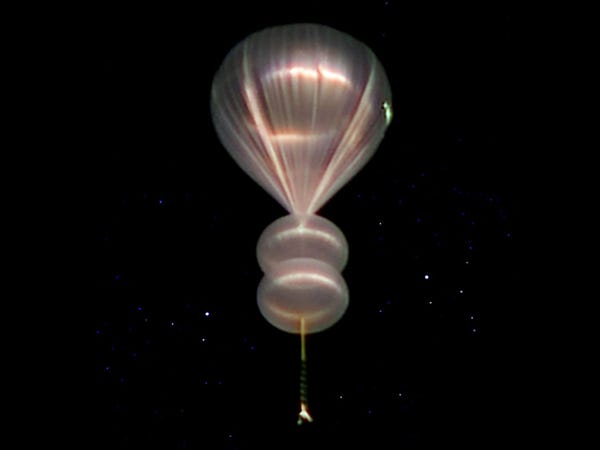 The key to World View’s current business is a pyramid-shaped surveillance platform called the Stratollite. The device can host ground-observing instruments — including cameras and radio beacons — and control the balloon above it to hover over a desired area for weeks or, in the future, possibly months at a time. World View was also developing a Voyager crew capsule to loft tourists into the stratosphere for $75,000 a piece.

But in early 2019, after helping push World View toward regular commercial operations, MacCallum and Poynter stepped aside, and the company’s board hired drone-business expert Ryan Hartman as CEO to run the company. With that executive transition, the Voyager crewed flight program got tabled indefinitely.

The reason why is now partly clear: MacCallum and Poynter, who remain minority shareholders in World View, wanted to urgently pursue crewed experiences. The larger board of the company they helped create, however, no longer did; balloon flights with people were viewed as a large liability exposure, a very different customer-facing business, and a distraction from uncrewed Stratollite flights, which seemed better poised to make World View money sooner.

“We have a huge financial interest in the success of World View. So we’re cheering them on. But we also needed to give them their own ability to go forth and make it make it happen,” MacCallum told Business Insider. “Having a bunch of founders looking over your shoulders can be tricky.”

So the couple have rebooted the concept with a new approach, location, and company, Space Perspective. The pair eventually convinced Space Ventures Investors to supply enough cash to fund a staff of 15 people through most of 2021, Poynter said. (She declined to provide a dollar figure, saying “we told our investors that we’re going to keep that confidential.”)

The company’s crew roster is a who’s-who of high-altitude ballooning, including Eustace and other StratEx team members, as well as former World View engineers. Their first big goal is to use their funding to get through the first uncrewed test flight of a Neptune prototype. 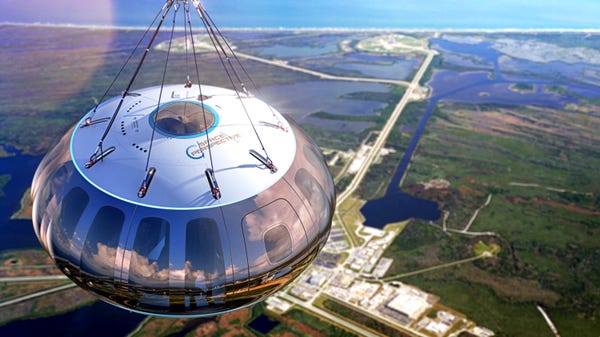 Although Space Perspective is perusing possible launch sites in Hawaii, Alaska, and locations outside the US, it plans to base its first launch operations at NASA’s space shuttle landing facility, which was last used in July 2011 (the month that 30-year-old government spaceflight program ended).

Space Perspective’s first uncrewed test flight is planned for the first quarter of 2021. If all goes according to plan, the team will create a full-size Neptune prototype, though one that weighs less. During the test, the Neptune dummy would soar to nearly 19 miles up at what MacCallum jokingly described as a “blazing” speed of 12 mph — a trip he noted would take about two hours. The capsule would float for about two more hours at that altitude before beginning its descent.

A seafaring ground crew would then recover the Neptune prototype after its splashdown in the Atlantic Ocean some 200 miles off the coast of Cape Canaveral, Florida. MacCallum said the full-up test should help the company try out the concept of operations or “ConOps” for the system, including its launch, flight, descent, and recovery stages.

“We’re reasonably calling it ‘the early slap in the face with reality,'” MacCallum said of test. “We want to give it an early run before we really start getting into detailed design on the capsule.” 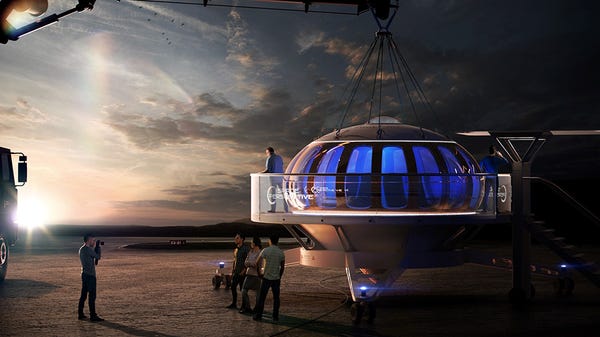 He added: “I think it’s only really a failure if something goes wrong and you can’t figure out what happened. The assumption here is that a whole bunch of things aren’t going to go as we planned, and we’ll learn from those.”

Barring radical design changes to Neptune, data from the test will help the company work toward crewed test flights in 2023. Along the way, Space Perspective would perform tests of every major subsystem, including an emergency parachute to bring the capsule back to Earth in the event that a balloon catastrophically bursts.

Poynter believes Space Perspective is about four years away from commercial flights but said the company will fly its first customers “when we’re good and ready.”

“Our strategic plan has us getting to something on the order of 500 flights a year within a few years after [first] operations,” Poynter said.

To that end, the company secured a 30-year lease for the shuttle landing facility from Space Florida, an organization which represents the interests of spaceflight companies in the state. But the co-CEOs said they’re still formulating an exact per-passenger ticket price. Poynter said they’d announce a dollar figure toward end of 2020, then put the first tickets up for sale sometime in 2021.

“We are anticipating that it will be on the order of half, or less than half, of the current Virgin [Galactic] ticket price,” Poynter said, referring to the now-public company’s rocket-powered SpaceShipTwo vehicle, which is designed to carry six passengers per flight.

Virgin Galactic has sold about 600 tickets for between $200,000 and $250,000 a seat, though a new round of 400 additional tickets will likely cost more, CEO George Whitesides recently told Business Insider. This suggests an individual ticket to ride Neptune may cost between $100,000 to $125,000, though perhaps more.

With a target of 500 flights and eight passengers per flight, annual revenue at full scale may range between $400 million and $500 million. And that’s not including any ancillary research payloads, which can be attached to the outside of the balloon craft. 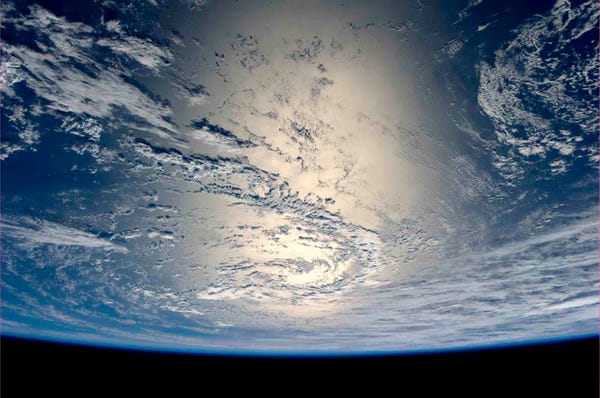 Aside from trying to establish a profitable business, MacCallum and Poynter — who espouse the fact that Earth is essentially a giant spaceship that humanity shares — hope to spread a philosophy with Space Perspective flights.

In particular, they want customers to walk away having experienced what astronauts refer to as the “overview effect:” a sometimes life-changing shift in perspective that comes with gazing upon Earth from above and contemplating its finiteness and connectedness.

Astronauts, who may live in space for months or even a year, are constantly exposed to that shift in thinking by orbiting Earth once roughly every 90 minutes while moving at about 17,500 mph.

“It is endlessly fulfilling. You never quite see the same thing as you are orbiting. There is a different ground track every time. The time of day is different; the clouds are different. The cloud patterns show different colors. The oceans are different; the dust over the deserts is different. It doesn’t get repetitive,” Joseph P. Allen, a now-retired NASA astronaut who flew twice aboard space shuttles, told author Frank White, who coined the term “overview effect” and wrote a book about it in 1987.

MacCallum and Poynter say that, unlike a brief rocket ride — which would grant passengers about five minutes a weightlessness and views of Earth outside a window — a relatively gentle ride on Neptune would be more accessible to those who can’t make such a trip.

And according to MacCallum, retired NASA astronaut Jeff Hoffman — an advisor to Space Perspective — said the balloon-based experience should also provide a more genuine opportunity to experience the overview effect, in part because a flight would last hours instead of minutes.

“He said for him, the quintessential spaceflight experience is very calmly quietly looking at the Earth from space for a long time,” MacCallum said, adding: “It is sort of like a meditation.”

This story has been updated.