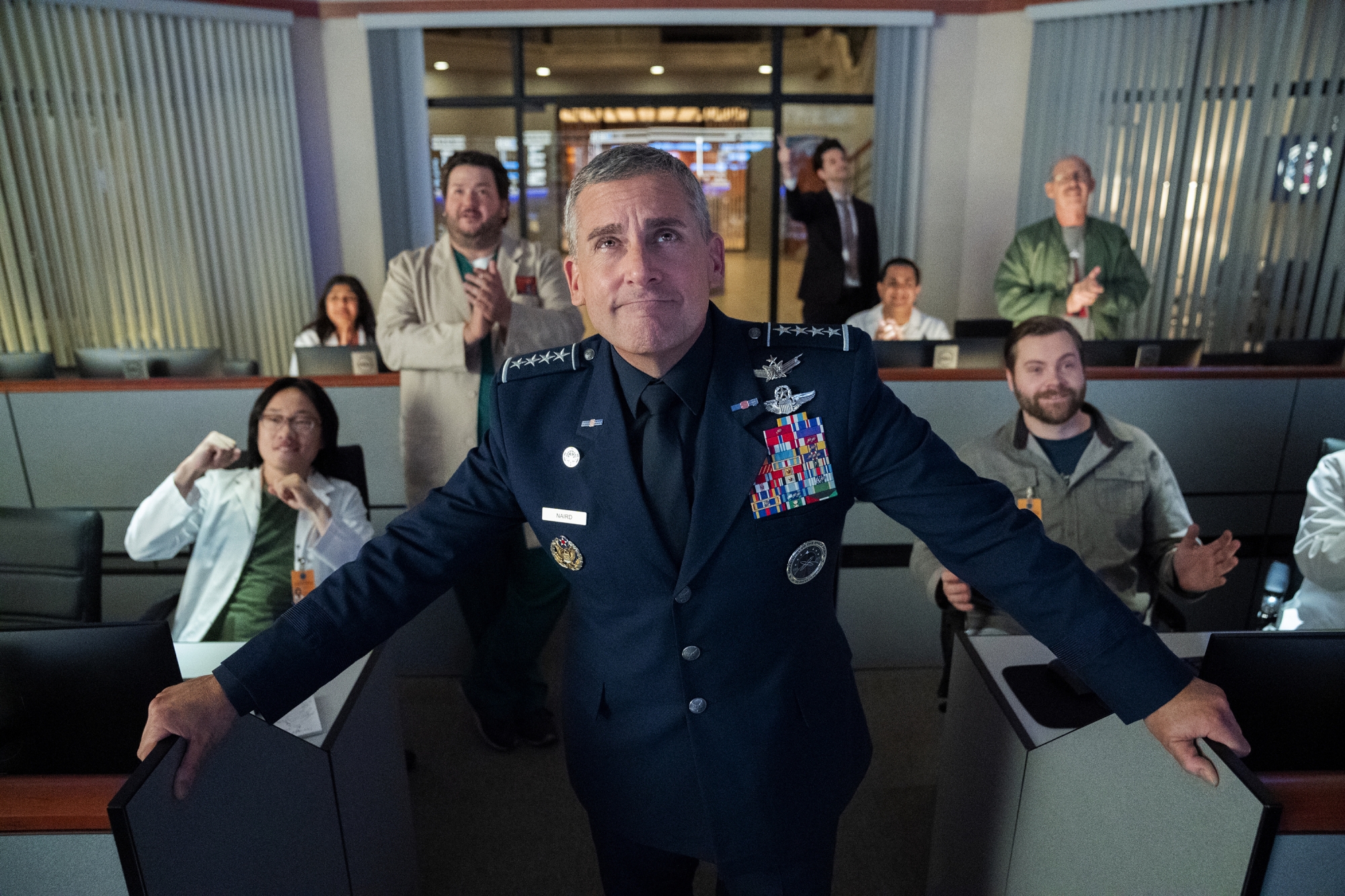 If you’re looking for some comic relief, you might try Netflix’s “Space Force,” which isn’t exactly great comedy television but at least brings some light to a dark world.

This image released by Netflix shows Steve Carell, center, from the comedy series “Space Force,” available for streaming on Netflix on Friday. (Aaron Epstein/Netflix via AP)

Sigh, the world around us has become pretty depressing over the past several months.

So if you’re looking for some comic relief, you might try Netflix’s “Space Force,” which isn’t exactly great comedy television but at least brings some light to a dark world.

Created by Steve Carell and Greg Daniels of “The Office” (2005-2013), the sitcom follows the newly-formed sixth branch of the military known as Space Force. Led by General Mark R. Naird (Carell), the group’s gung-ho mission is to put “boots on the moon” by 2024 in a new 21st century space race against the rising superpower of China.

Any show starring Carell is worth watching, having split our sides as Michael Scott on NBC. This time, his character is aptly named Naird, which sounds a lot like “nerd.” Every episode, his idiotic decisions somehow surprisingly pan out, like a reverse “Gilligan’s Island” (1964-1992), all with that lovable loser vibe that Carell has practically perfected.

At times, the famous faces become distracting, relying more on built-in star power than anything organically created in the show. You might find it hard to get into the first few episodes, but once you get to know the characters, you’ll be along for the quirky ride.

As for the jokes, they’re more of the amusing variety than anything laugh-out-loud funny. Launched as a Hollywood spoof of Washington, it’s nowhere near as clever as Stanley Kubrick’s “Dr. Strangelove” (1964) nor as daring as Adam McKay’s “Vice” (2018). It feels more like a lowbrow comedy than a highbrow political satire riffing on real events.

Still, there are a few nods. F. Tony Scarapiducci is clearly a play on Tony Scaramucci, while other roles have other uncanny resemblances to certain members of Congress.

If you’re hoping for a character spoofing the president himself, you’ll sadly have to settle for Alec Baldwin’s parody on “Saturday Night Live.” The Commander in Chief is merely a periphery figure here, sending orders from afar rather than a main character in the show.

What might have seemed like an edgy political satire when it was developed in 2019 now suffers from the fact that truth has become stranger than fiction. The news has delivered plot twists that would seem over-the-top — bat viruses, murder hornets, tweet storms, White House protests, Bible photo ops, TikTok takedowns — but it’s all painfully real.

Ironically, that same reality now includes a trademark dispute where Netflix claims it trademarked the phrase “Space Force” before the Pentagon. That means the Trump Administration might have to find a new name for its cartoonish “Star Wars” initiative.

Sadly, “Spaceballs” is already taken — “May the (Ben) Schwartz be with you!”

Name aside, “Space Force” is a light load of only 10 half-hour episodes, so it can’t hurt to binge it for a mindless escape. Whether you liked Season 1 or found it underwhelming, here’s hoping for a better Season 2. As the show’s tagline reads, “Nowhere to go but up.”