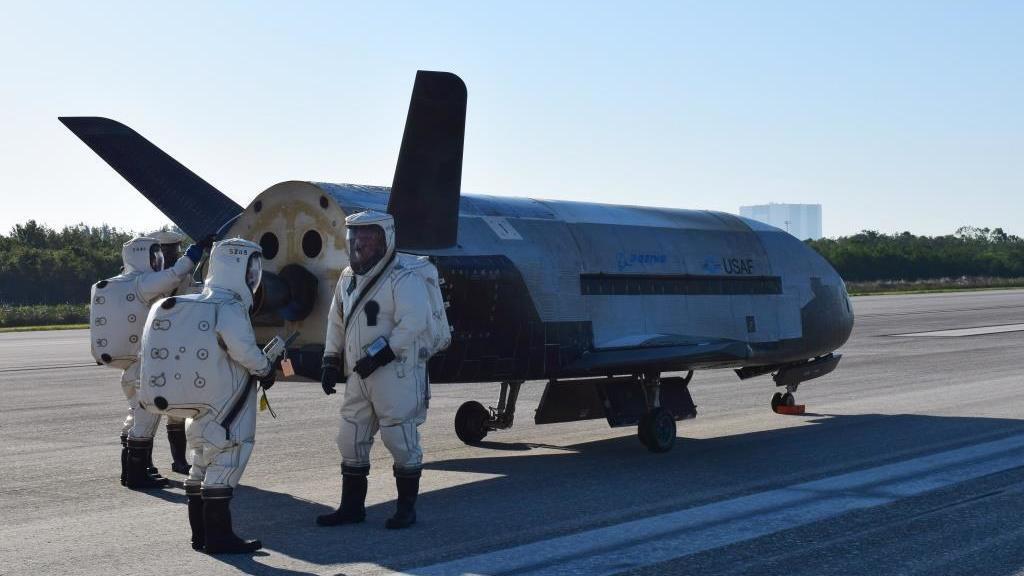 China may have landed a new space plane on Sept. 6 at this secretive air base, located in China in the desert near an old nuclear testing ground. Planet Labs Inc. 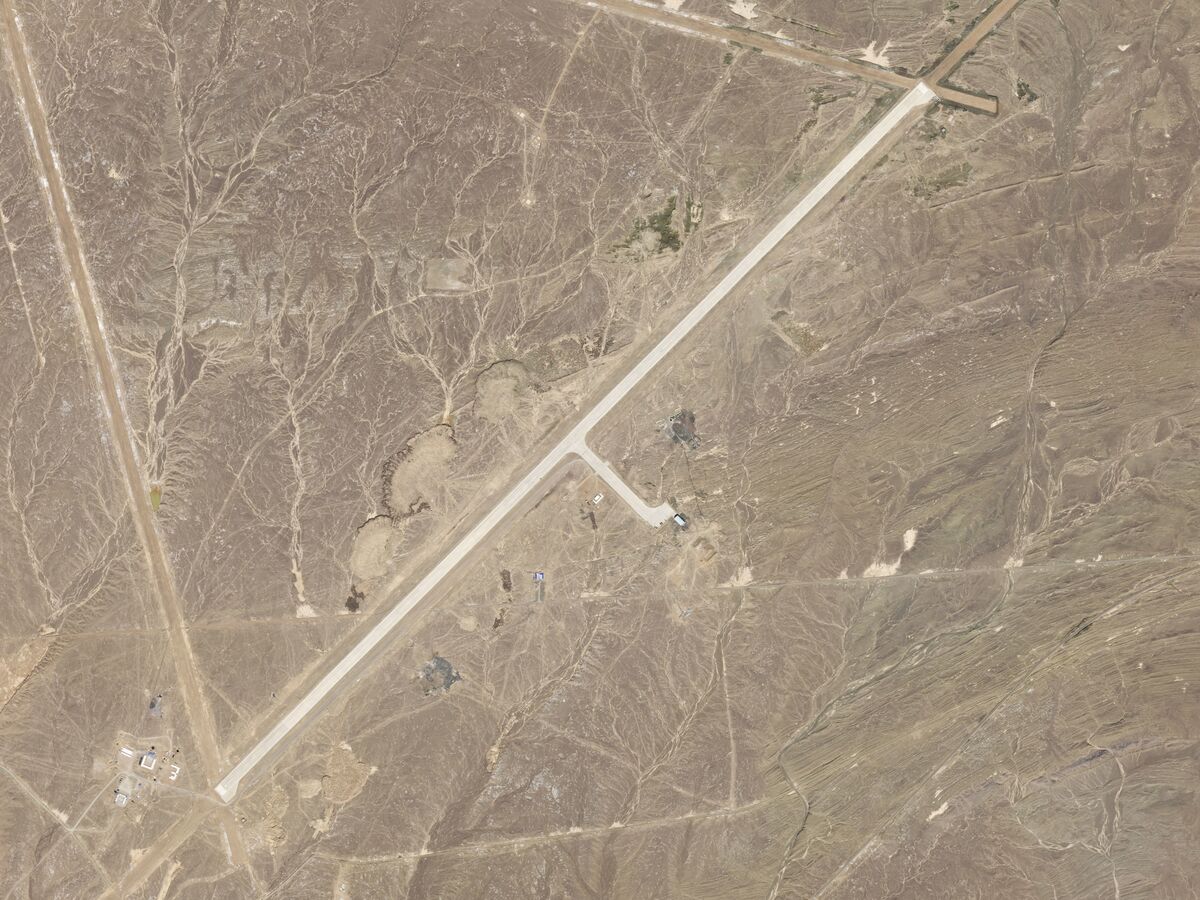 China may have landed a new space plane on Sept. 6 at this secretive air base, located in China in the desert near an old nuclear testing ground.

A commercial satellite photo may reveal a new Chinese space plane just moments after it landed at a remote site on the western side of China.

The photo, which is too low resolution to be conclusive, was snapped by the San Francisco-based company Planet. It shows what could be the classified Chinese spacecraft on a long runway, along with several support vehicles lined up nearby.

Terse statements by China’s official Xinhua news agency said only that a Long March 2F rocket had carried a “reusable experimental spacecraft” into orbit and that the launch and landing were successful. The landing took place on Sept. 6 at almost the exact time the photo was snapped by the passing satellite.

A photo snapped by a passing commercial satellite shows objects on the airstrip at 10:11 a.m. local time on Sept. 6, just minutes after a scheduled landing would have occurred. Photo by Planet Labs Inc. Annotations by NPR. 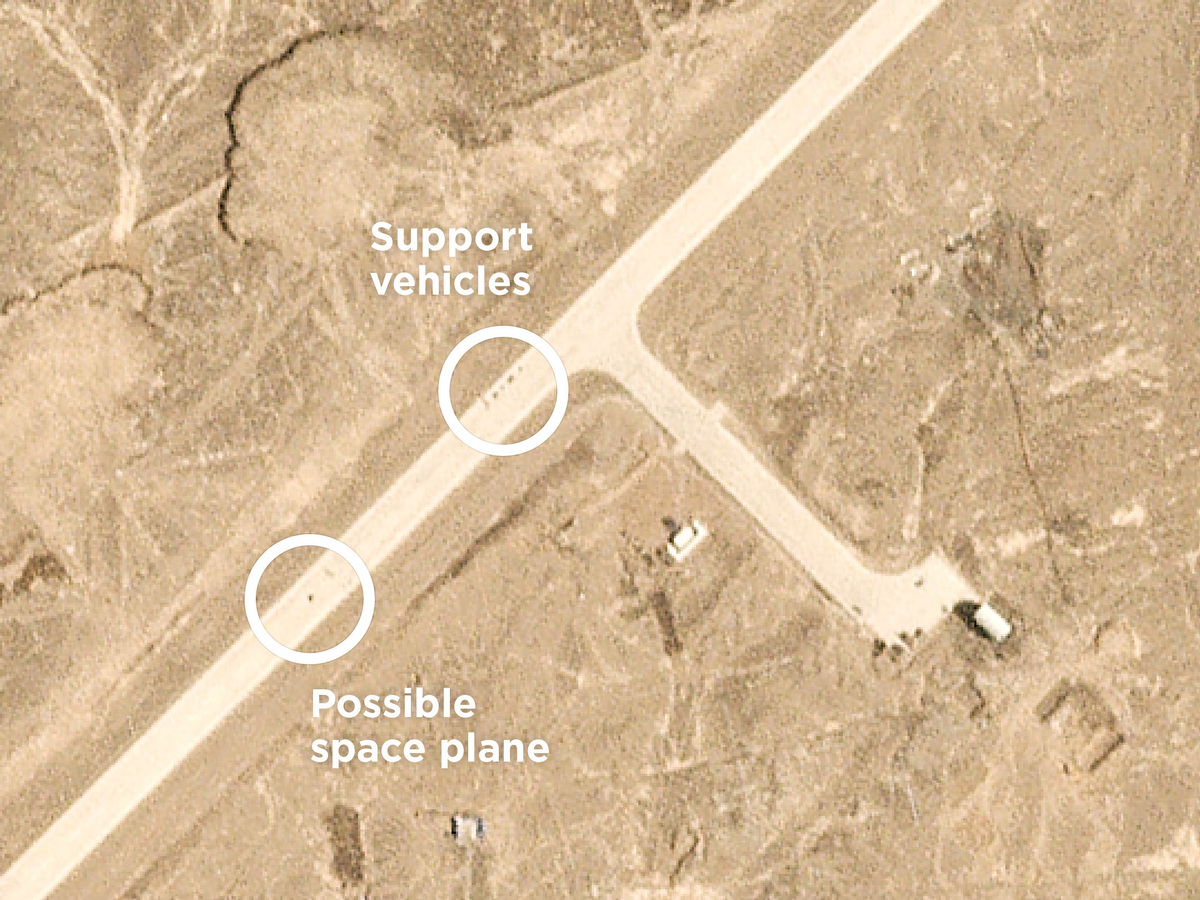 A photo snapped by a passing commercial satellite shows objects on the airstrip at 10:11 a.m. local time on Sept. 6, just minutes after a scheduled landing would have occurred.

“I’m reading a lot into a few little dots,” admits Jonathan McDowell, an astronomer with the Harvard-Smithsonian Center for Astrophysics, who diligently tracks spacecraft and satellites. But, he says, the photo, combined with other circumstantial evidence, such as the new spaceship’s orbital path, strongly suggests that China has launched and landed a small, uncrewed, space-shuttle-like vehicle. “The information sort of all hangs together now that this was a test of something, probably a space plane, that made a winged reentry and landed on the runway,” he says.

The new spaceship took off on Sept. 4 under unusually heavy secrecy compared with other recent Chinese space missions.

“They didn’t give a launch time. They didn’t give any more details,” McDowell says. The U.S. military picked up the new spacecraft on its tracking network, and McDowell and others quickly plotted its orbit. When they did so, they found that China’s new craft passed over a secretive military facility: an area called Lop Nur where China once tested its nuclear weapons.

In 2016, China constructed an enormous 5-kilometer (3.1-mile) runway at the site. The new spacecraft’s orbit passed directly over the runway, which was aligned with its path.

On Sept. 6, China announced that the spacecraft had returned to a “scheduled landing site.”

“The ground track around the time of landing suggested that it might have landed at this mysterious new air base,” McDowell says.

The new spacecraft is likely much smaller than the U.S.’s space shuttle, which launched using rockets and then glided back to Earth. Instead, McDowell and others think the new Chinese vehicle probably resembles a robotic spacecraft called the X-37B. The X-37B has been operated by the U.S. Air Force for about a decade.

So why might China now be getting into space planes?

“It’s a great question,” says Brian Weeden, director of program planning for the Secure World Foundation, which advocates for the peaceful use of space. “We’re not even really sure why the U.S. military is pursuing a space plane.”

The U.S. X-37B program remains highly classified. Weeden says he believes it is being used to test new sensors and systems for the military.

“If you can fly some of that technology in space, let’s say in the payload of a reusable space plane, that could give you a better feel for how it might react [once it’s in orbit for good],” Weeden says. Other possibilities include the ability to launch satellites quickly and to test robotic systems for autonomous maneuvers and landings.

The U.S. Air Force has been sending the X-37B robotic spacecraft into space for over a decade. Its missions remain classified. U.S. Air Force 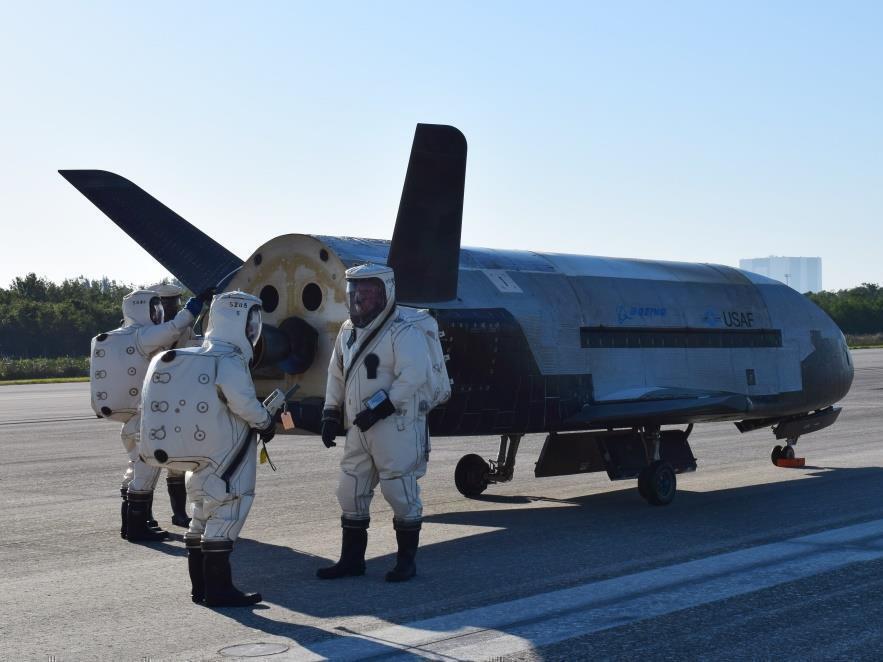 The U.S. Air Force has been sending the X-37B robotic spacecraft into space for over a decade. Its missions remain classified.

McDowell says that space planes, which reenter Earth’s atmosphere at many times the speed of sound, could also potentially aid the development of hypersonic weapons. But he believes China’s motivation could be as simple as wanting to duplicate U.S. military capabilities.

” ‘If the Americans have one of those, there’s got to be a good reason for it, so we better get one too,’ ” he says. Such thinking drove the Soviet Union to develop a copy of the U.S. space shuttle in the 1980s, though it never got much use.

The landing of this space plane — or whatever it was — is just the latest success for China. It recently completed its own satellite navigation system, and it has a robotic mission going to Mars and several probes on the moon.

“China is firing on all thrusters in space,” McDowell says. “I think that this is just one more reflection of that.”