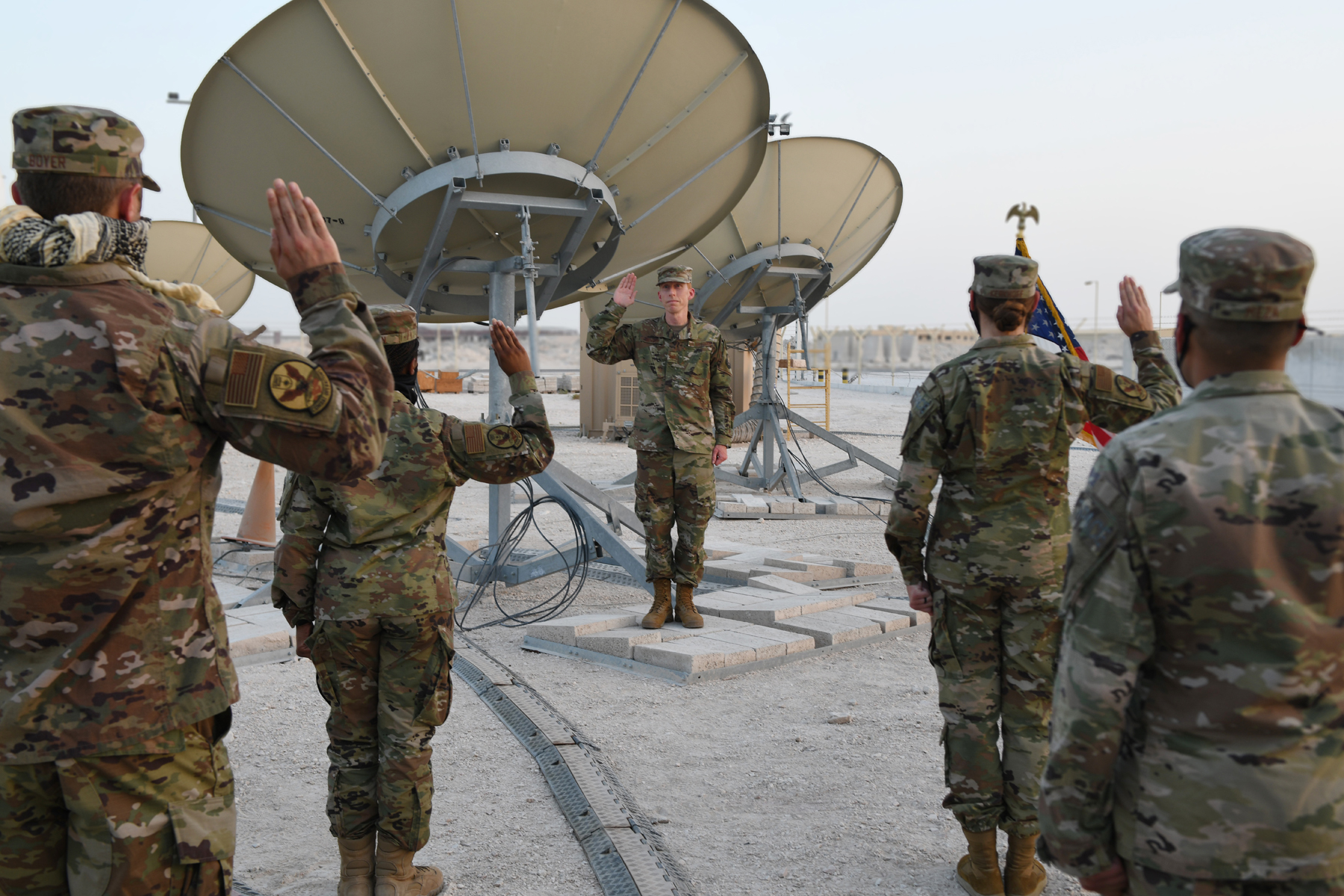 The U.S. Space Force has marked another milestone for the history books: the first official deployment of its troops — and it’s not to the moon.

Twenty airmen assigned to the 16th Expeditionary Space Control Flight and the 609th Air Operations Center at Al Udeid Air Base, Qatar, transferred into the military’s newest branch during enlistment or oath of office ceremonies earlier this month, according to a news release. The airmen are in organic space career fields such as space operations and space systems operations, officials said.

“Those participating in today’s ceremony are not only joining our nation’s newest service, they are joining this service while deployed in defense of our nation,” said U.S. Air Force Col. Todd Benson, director of Space Forces for U.S. Air Forces Central Command, in the release.

“They are the first members of the United States Space Force to be deployed in support of combat operations,” he said of the Sept. 1 ceremonies, which marked the start of transferring personnel into the sixth military branch.

Airmen have routinely supported exercises and deployments for troops who rely on space assets on the battlefield, including satellite communications and other networking resources. But airmen who’ve deployed for the latest mission anticipate “watching technology and tactics evolve as the U.S. rises to thwart adversary efforts,” according to the release.

For example, Senior Airman Aron Franks, of the 16th Expeditionary Space Control Flight, said he’s looking forward to putting his skills to the test as a space systems operations specialist who “geo-locates, characterizes and reports sources of electromagnetic interference to U.S. satellite assets,” the release states.

“It’s rewarding when you get to see how your efforts are being processed or applied to the overall fight, to see our piece of the puzzle,” he said.

Tech. Sgt. Cody Hircock, superintendent of the 16th, who has been in the space career field for more than a decade, said new technologies are giving troops the leading edge.

“Back when I joined my first unit in 2009, I actually got to watch them launch our third satellite,” said Hircock, who submitted an application to join the Space Force last spring. “Now, they have 10, so their capabilities have expanded.

“It’s been really impressive to see how much space — and the need for space — has expanded,” he said.

The airmen are supporting operations in the Middle East, officials said.

The Space Force will hold future ceremonies for airmen transferring in from other fields, such as acquisition, intelligence, engineering and cyber.

For the time being, the transferees will still be referred to as airmen.

“So we’ve got to let that law, that legal system, play out, and until it plays out, there’s really no point right moving forward,” Towberman said in a Q&A segment during the Air Force Sergeants’ virtual symposium.

“I’m ready to be a master chief if that’s what the law says I’ll be; we’re ready to pivot and do something else if we’re asked to do something else,” he said. “I know that that’s frustrating to folks; we really would have preferred to have an answer by now. We’re going to [start] bringing airmen in on Sept. 1, and for those junior grades, in particular, it means they’re still going to be called ‘airman’ even though they’re in the Space Force because we just don’t have any other options right now.”

Other pending decisions include dress uniform updates, Space Force-specific insignia and a rank structure; officials are still also deciding what to call its members.

But over the last year, the newest military branch has debuted its official logo, seal, flag and organizational structure. Like the Army and Air Force, officials last month also announced Space Force members will wear the Operational Camouflage Pattern as the official service duty uniform.

Related: US Air Force Preparing for War in Space