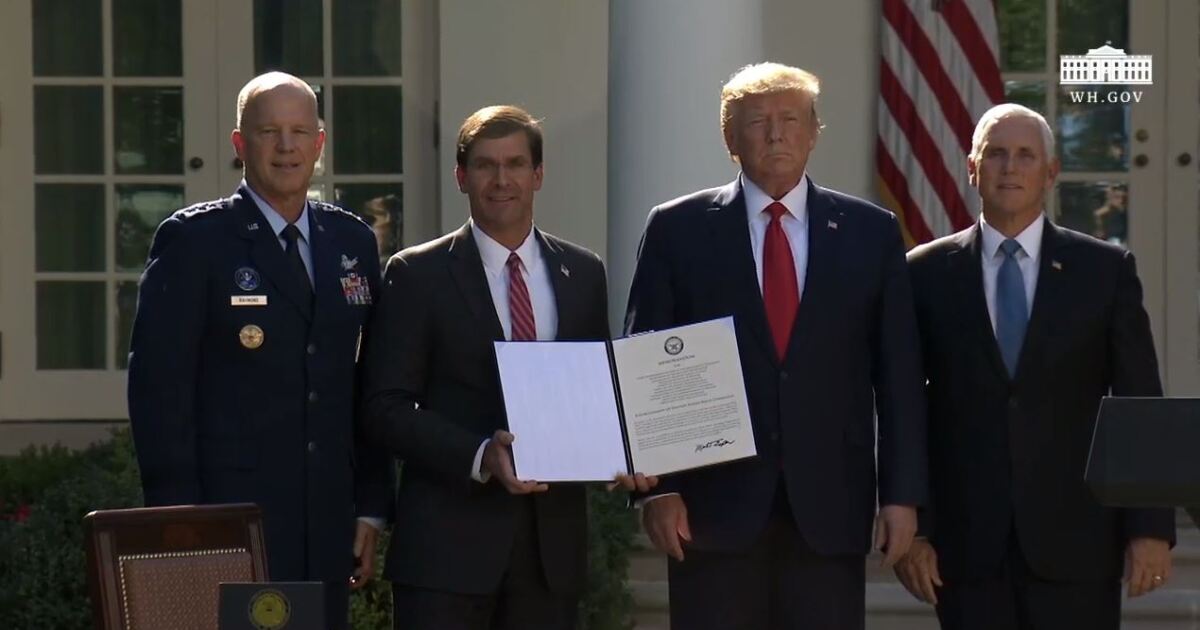 COLORADO SPRINGS — President Donald Trump has made it official with the establishment of U.S. Space Command to be temporarily headquartered at Peterson Air Force Base in Colorado Springs.

Vice President Mike Pence, Secretary of Defense Mike Esper and John “Jay” Raymond joined the President in the Rose Garden for the announcement.

“The dangers to our country constantly evolve and so must we. Now, those who wish to harm the United States, to seek to challenge us in the ultimate high ground of space, it’s gonna be a whole different ballgame,” says President Trump.

The command’s mission, according to retired Air Force General William Shelton, is basically “war fighting in space” that he said is long overdue as the threats in space from the likes of China, Russia and even India are growing everyday.

Shelton said that those three nations have been conducting tests on space intercepts and other exercises for years, and he says it is a “direct threat” and prevents the United States from operating freely in space.

The mission of U.S. Space Command is to focus specifically on space defense. It will be run under the umbrella of the U.S. Air Force and is part of the developing Space Force that would establish space military defense as another branch of the U.S. military, similar to the Army, Navy, Air Force, Marines and Coast Guard.

Shelton said that Raymond is uniquely qualified for the job, with the ability to handle multiple commands and comes to the leadership position with expertise of aircraft operations, space command, logistics support and other responsibilities that he managed while serving at the Pentagon.

Space defense is the next generation of national defense for this country and other super powers around the world, Shelton said “it’s much like cyber, where it’s an unseen enemy so to speak out in space, but nevertheless it’s very important in that it is foundational, space capability is foundational to everything we do in war fighting.”

As for the temporary headquarters at Pete Field, Shelton said it’s a marriage of convenience right now, with the ability to ramp up quickly with existing staff and infrastructure, and that it bodes well for the future, if Colorado Springs is selected as the permanent home of U.S. Space Command moving forward.

Shelton said it will be an economic driver for the Pikes Peak region, already boasting an impressive military footprint along with so many support operations in the private sector. Shelton said “in terms of contractor support, in terms of requirement support for new capability, all those kinds of things will result in new jobs in the community, new companies moving in, companies who are already here, expanding their roles as well.”

The establishment of the Space Force is still in the works and needs the approval of Congress moving forward. Shelton said he believes that it is at least a couple of years away, but at the request of the president, he said that initial skeptics at the Pentagon are coming on board in support of the president and vice president and their vision for how this will be an integral part of U.S. military operations for decades to come.

“The United States Space Force will ensure that our nation is prepared to defend our people, defend our interests, and to defend our values in the vast expanse of space and here on Earth with the technologies that will support our common defense for the vast reaches of outer space,” Pence said.

Eventually an undersecretary of defense for space will be named. As for the site for the permanent home for U.S. Space Command, several locations here in Colorado, in addition to Peterson Air Force Base, are being considered along with possible sites in Alabama and California.

The formal ceremony to “stand up” as it’s called, U.S. Space Command will take place in Washington D.C., we are told that a command ceremony will be held at Peterson Air Force Base at some point in September.

Copyright 2019 Scripps Media, Inc. All rights reserved. This material may not be published, broadcast, rewritten, or redistributed.