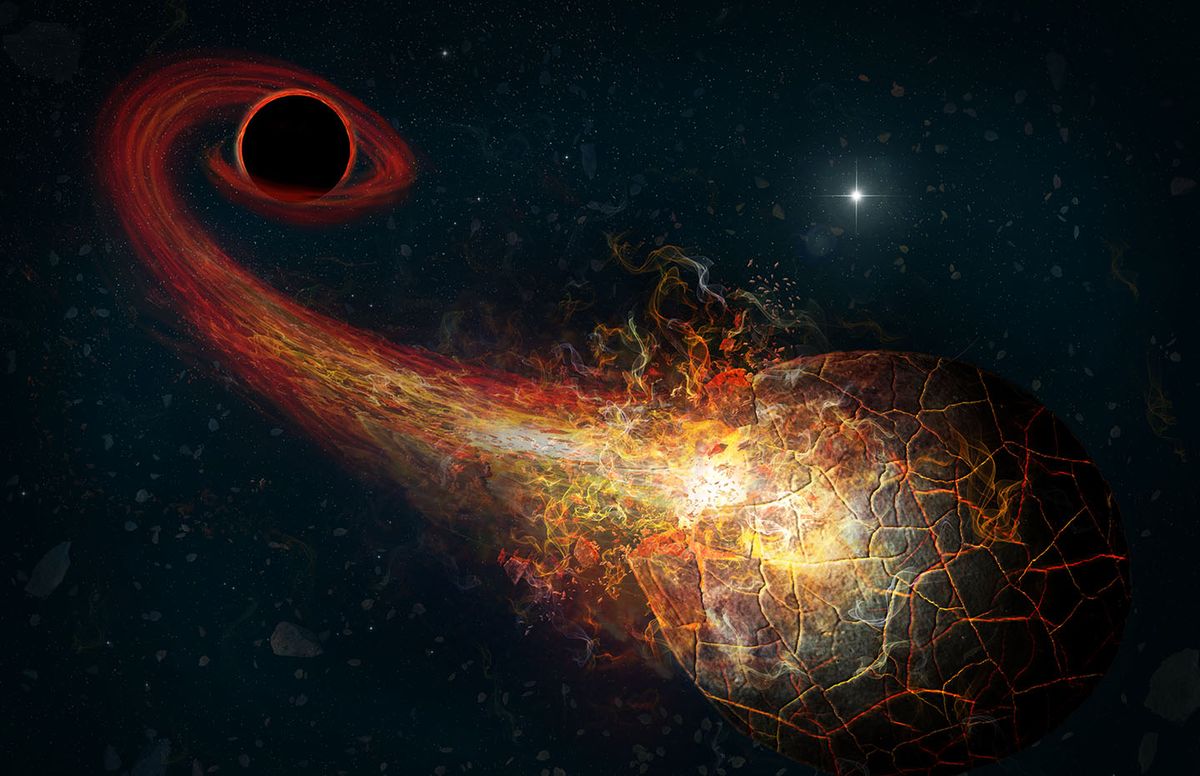 Space is supported by its audience. When you purchase through links on our site, we may earn an affiliate commission. Learn more

Artist’s conception of accretion flares resulting from the encounter of an Oort-cloud comet and a hypothesized black hole in the outer solar system.

A coming sky survey will help test a wild idea — that a grapefruit-sized black hole lurks undiscovered in the outer solar system.

Over the past few years, researchers have noticed an odd clustering in the orbits of multiple trans-Neptunian objects (TNOs), which dwell in the dark depths of the far outer solar system. Some scientists have hypothesized that the TNOs’ paths have been sculpted by the gravitational pull of a big object way out there, something five to 10 times more massive than Earth (though others think the TNOs may just be tugging on each other).

This big “perturber,” if it exists, may be a planet — the so-called “Planet Nine,” or “Planet X” or “Planet Next” for those who will always regard Pluto as the ninth planet. But there’s another possibility as well: The shepherding object may be a black hole, one that crams all that mass into a sphere the size of a grapefruit.

Related: The evidence for ‘Planet Nine’ in our solar system (gallery)

Astronomers are already scanning the heavens for any sign of Planet Nine, and they should soon be able to hunt for the putative black hole as well, a new study reports.

The highly anticipated Vera C. Rubin Observatory, a big telescope under construction in the Chilean Andes, is scheduled to begin a wide-ranging, decade-long survey of the southern sky called the Legacy Survey of Space and Time (LSST) in late 2022.

The Rubin Observatory will be incredibly sensitive and scan large swaths of sky repeatedly, a combination that will provide an unprecedented wealth of data, scientists have said. For example, LSST data will allow astronomers to probe the nature of mysterious dark energy and dark matter, find and track large numbers of potentially hazardous asteroids and study our Milky Way galaxy’s formation and evolution, among other things.

The LSST observing program will also be able to spot a potential black-hole signature, the new study reports — “accretion flares” that result when black holes gobble up comets or other small objects.

“Because black holes are intrinsically dark, the radiation that matter emits on its way to the mouth of the black hole is our only way to illuminate this dark environment,” co-author Avi Loeb, the chair of Harvard’s astronomy department, said in the same statement.

LSST data should be able to confirm or rule out the Planet-Nine-is-a-black-hole hypothesis within a year of the survey’s commencement, according to the new study, which has been accepted for publication in The Astrophysical Journal Letters. (You can read a preprint of it for free at arXiv.org.)

And whatever LSST reveals will be of great interest to astronomers.

“The outskirts of the solar system is our backyard. Finding Planet Nine is like discovering a cousin living in the shed behind your home which you never knew about,” Loeb said. “It immediately raises questions: Why is it there? How did it obtain its properties? Did it shape the solar system history? Are there more like it?”