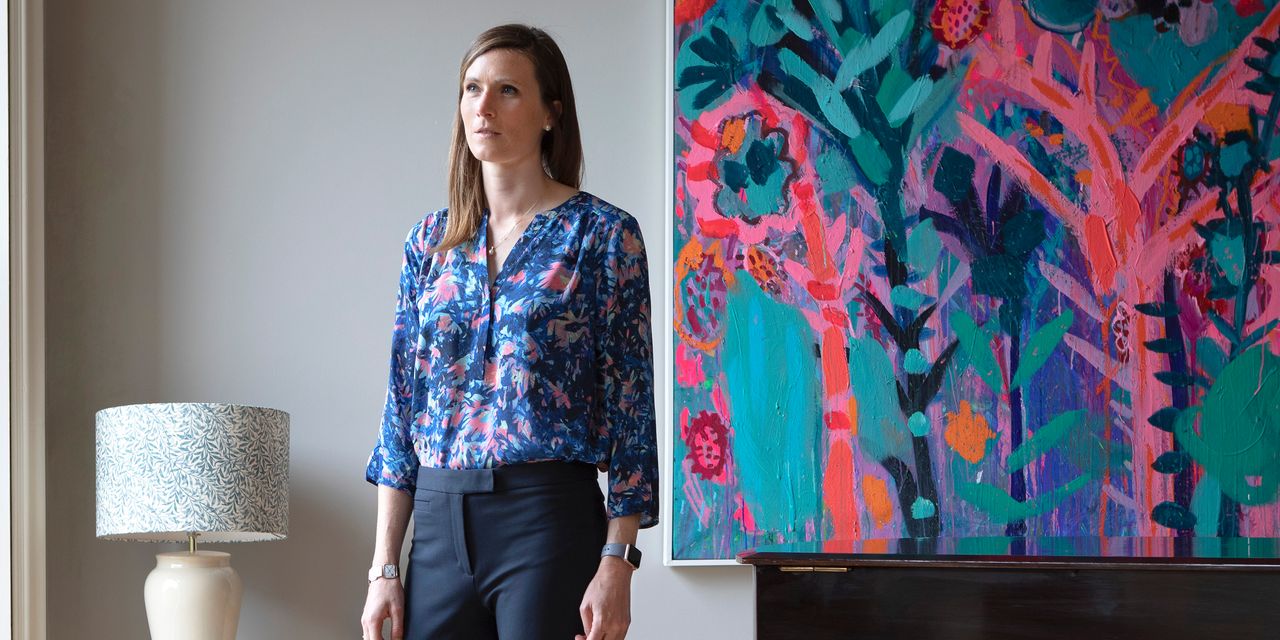 Jenny Davis had a brush with crisis early on in her career: The co-manager of the $3.6 billion Baillie Gifford International Alpha 2 fund was finishing an internship in the financial industry in the same week that Lehman Brothers collapsed. This left an indelible mark, and Davis now focuses on companies around the world that can grow despite whatever events come at them—like a pandemic and a cold war between the U.S. and China.

Davis and her co-managers at Baillie Gifford International Alpha 2 (ticker: BGITX) focus on long-term trends and companies with considerable competitive advantages. Some are rapid growers—like Alibaba Group Holding (BABA) or Latin America’s MercadoLibre (MELI). Some grow at a slower, though steady, pace; others are savvy capital allocators that are expanding into new markets; while still others, like Ryanair Holdings (RYAAY), have a structural advantage that sets them apart, even in down cycles.

That approach has helped the fund beat more than 80% of its peers over the past one-, five-, and 10-year periods, according to Morningstar. Over the past year, it has returned more than 30%, beating the MSCI ACWI Ex USA Growth index by seven percentage points. Barron’s talked with Davis about what the buzzword “quality” means to her, why she likes some airlines, and what the technology cold war means for semiconductor companies. An edited version of our conversation follows.

Barron’s: U.S. stocks have done so well for so long. What’s the case for looking elsewhere?

Jenny Davis: There’s a home-country bias. Money is managed in the West and invested in the West. The U.S. represents 70% of the MSCI World index, but only a quarter of global gross domestic product. China is next at 16%, but makes up less than 1% of the world index. It’s worth paying attention to China, but what is also getting forgotten is that Europe is stuffed full of high-quality businesses and becoming home to younger innovative rapid-growth businesses like Spotify Technology [SPOT] and [Germany’s online real estate platform] Scout24 [G24. Germany]. While Latin America is often seen as struggling with a commodity and resource curse, there are some fantastic businesses like MercadoLibre, our largest holding, for which we still see significant upside from here.

You focus on quality and growth companies—two big buzzwords. What does “quality” mean to you?

Quality has inputs and outputs. The inputs are the most important but also hard to measure. We look for a competitive advantage and stewardship, which means that people at the top are aligned with the long-term interests of the company—often that is linked to being an inside shareholder. The output is companies with lower debt/equity, higher returns on the balance sheet, and faster earnings growth.

Most of these companies aren’t cheap. Can they keep going higher?

Valuation is one of five factors in our analysis, but the last one. With traditional businesses, you buy tangible assets on the balance sheet that generate profits. With rapid-growth businesses, you have intangible assets expensed through the income statement, so profits are suppressed and valuations look high—as happens with MercadoLibre or Amazon.com [AMZN].

The pessimist view, which I believe is the value-investing view, is that in the face of uncertainty I need a greater margin of safety, demanding a lower valuation. Growth investing is inherently positive. We are optimists: You need to demand higher potential upside in face of uncertainty.

Do you see more upside for technology companies outside the U.S. and China?

MercadoLibre’s market cap is $60 billion; Alibaba’s is $800 billion. The population of Latin America is about half that of China, so why not $400 billion at some point? Online penetration of e-commerce in Latin America is 5% of retail sales, about a quarter of China’s. Then you throw its payments business on top, and there’s a whole ecosystem, so a much longer runway. Of course, you don’t have Amazon in China, so you can’t map one off the other, but it’s important to remember the magnitude of the opportunity.

What other types of growth companies do you own?

The market often underestimates the power of quality compounders, year after year. The market’s average holding period is one year; ours is eight, so the power of compounding is huge. Chr. Hansen Holding [CHR. Denmark] can compound its successes and also expand its growth opportunities with its huge amount of expertise. It makes bacteria and enzymes in yogurt and cheese, and is moving into new markets, like probiotics and a joint venture to look at the applications of good bacteria for food supplements.

You also own airlines, which have been decimated during the pandemic. Has the case changed here?

We own Ryanair and Copa Airlines’ parent Copa Holdings [CPA]. Neither saw the pandemic coming; Ryanair saw traffic fall 99% in May. But both have strong balance sheets and have delivered higher profitability versus peers because of their competitive advantages. Ryanair has the lowest unit costs, with the youngest fleet, lowest maintenance and airport costs. When there’s a fall in traffic or price, they are most likely to survive. It also comes down to actions: Ryanair’s competitors are canceling planes on order; Ryanair is keeping its orders and [may] order more. They know Boeing is struggling and is negotiating a price discount on planes, which furthers its advantage.

What pandemic-related trends are fueling growth for some firms?

Every single business needs a decent software offering that enables employees to work remotely, and that has massively accelerated as [companies] make sure they have a cloud version of their enterprise software. There has been a step change, and it will have huge implications for society.

This weekly email offers a full list of stories and other features in this week’s magazine. Saturday mornings ET.

SAP’s [SAP] largest shareholder, chairman and co-founder [Hasso Plattner], rejoined SAP [several years ago] and decided it needed to get into the cloud. SAP made big acquisitions, so it is now competitive. The most up-to-date version of SAP’s enterprise resource-planning software, which enables cloud, hybrid cloud, and machine-learning functionality, has seen a 40 times increase in customers in five years. But the fastest acceleration is in telemedicine with data.

We have held Ping An HealthCare and Technology [1833.HongKong], which runs Ping An Good Doctor, for only a year, and the stock has almost quadrupled. Its online doctor consultations fill a gap in primary care, and that artificial intelligence enables a greater level of scalability and future diagnostic power of data than doctor consultations. That growth opportunity was massively accelerated by the coronavirus: Registered users rose 900% from December to January. If you have people coming back to the app and updating it, you get this powerful health record.

What are some of the areas you are monitoring postpandemic?

Health care has to up the ante. It’s such an inefficient sector: It takes 10 years and $2.5 billion a year to develop a drug, and about half underperform. Consumers want something targeted, while drug companies want a large patient population and a blockbuster drug. The way to resolve that has to come from data, better diagnostics, faster drug trials—and it will be linked to telemedicine. There’s a lot of disruption to come within health care.

What else will be disrupted?

How companies are thinking about bringing staff back to office and the future of work-from-home. There’s the ecosystems around the office, like shoe cleaners, gyms, dry cleaners—that’s going to change business districts. While we don’t know what will happen to urban density, we will have people reconsidering where they live. And that leads to more turnover of housing stock. So property portals—like Scout24 and KE Holdings [BEKE], known as Beike Zhaofang in China—will be important parts of that value chain, while owners of real estate will be in riskier positions.

I’m trying to assess the impact from potential changes on whether they can operate in the U.S. For Alibaba, it’s not relevant. Tencent Holdings is also mostly domestically focused. We have shifted some of the Alibaba holding into the Hong Kong listing, more because Hong Kong is closer to China and its low-cost to mitigate potential risk.

Semiconductors are in the midst of the tech cold war, and the U.S. is limiting exports of technology. Does that give you pause about your chip-related holdings?

Taiwan Semiconductor Manufacturing [TSM] sells to Huawei Technologies, but by no means is Huawei its largest customer. Growth opportunities outweigh the potential risk. You can’t predict what may happen, but you can prepare, so we buy businesses that are dominant in a niche that supplies progress, like Taiwan Semi. They don’t need to know what the next application is for semiconductor chips; they have an incredibly dominant position in supplying those chips. It’s the same thinking behind ASML Holding [ASML].

These companies power the global economy from behind the scenes. This cold war is telling us how important these companies are. I don’t want to downplay the risk, but [we need to] assess the magnitude and probability. At the moment, the magnitude is withstandable.

Write to Reshma Kapadia at reshma.kapadia@barrons.com