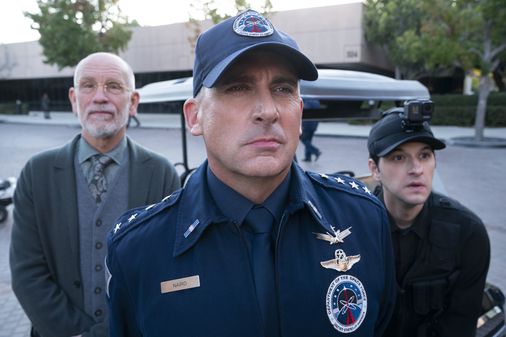 Two weeks ago, in the middle of the world’s health and financial crises, President Trump created a “very special moment” and tried to turn our attention to his Space Force. He revealed the flag for our new, sixth branch of the military, and, lest anyone think the Space Force is merely about furthering the joys of interplanetary travel, he announced a “super-duper missile” that will protect our interests from way above.

It seemed as through Trump couldn’t have provided Netflix’s new comedy, “Space Force,” with a better bit of advance promotion, promotion being his forte. And yet I’m afraid that, in this case, the reality has completely stolen the show. The actual Space Force, whose logo drew the ire and ridicule of “Star Trek” fans for its similarity to the Starfleet Command logo, is far more darkly humorous than “Space Force.” There is very little in this comedy that will call forth smirks, never mind laughs — and that’s saying a lot, given the talent involved in the first 10-episode season, available on Friday.

The talent in question begins with the team of Steve Carell and Greg Daniels, the star and creator, respectively, of “The Office,” with Daniels also among the creators behind “King of the Hill,” “Parks and Recreation,” and “Upload.” Netflix, which has had great success with the “Office” catalog, presented them with the “Space Force” idea after Trump initially announced it in 2018, and they accepted — but I’m not sure the pair continued to use their formidable creative muscles after that moment. What they’ve come up with from this reverse-engineered situation is a stubbornly bland, tonally unbalanced, and oddly paced take on the Space Force that inspires shoulder shrugs and disinterest. One night recently, I was halfway through the last episode of the season, and instead of spending the 15 minutes to finish it, I put it off until morning — it’s that kind of show.

Carell, in his first regular comedic TV role since “The Office,” stars as General Mark Naird, an ill-defined character who is charged with getting the Space Force up and running. The president — who is never named but, with his penchant for spelling errors, unusual demands, and a dislike of science, seems like Trump — has tweeted that he wants “boobs on the ground” on the moon by 2024. He means “boots,” of course. (One of the many strange choices by Carell and Daniels is to be largely apolitical, despite the highly political concept behind the show; there’s not even a skosh of “Veep” in play here.) So Naird upends his family life with his wife, played by a largely wasted Lisa Kudrow, and his teen daughter, Erin (Diana Silvers), and moves from D.C. to Colorado. He’s a boss, but it’s hard to say whether he is an order-crazed boss insulted by his new assignment or a kind and motivating boss eager to please the president, since he seems like different people at different points in the season.

Naird spends a lot of time with the Space Force’s head scientist, Dr. Adrian Mallory, but he often resists Mallory’s ideas — except those times he doesn’t for some reason. I think they’re supposed to be doing buddy comedy, but I can’t be sure. As Mallory, John Malkovich has a few good moments — notably a long scene of public shaming over a private video he made — but his story line barely takes off. Naird also spends time defending his Space Force against the heads of other military branches who want the money he’s getting — an ongoing gag that feels beside the point. One of the most dated bits features Ben Schwartz’s foolish, superficial social media dude desperately trying to derive viral moments out of Naird’s boring personality.

The recurring cast is peppered with appealing players, none of whom stand out (except Kaitlin Olson, who is amusing as an Elizabeth Holmes-like businesswoman in one episode). How sad it is that, in his last performance, Fred Willard (to whom the first episode is dedicated) is stuck playing Naird’s father as a one-joke dementia patient. As the officials threatened by the Space Force, Patrick Warburton, Noah Emmerich, Diedrich Bader, and Jane Lynch are wasted, as are Jimmy O. Yang as a scientist and Tawny Newsome as a pilot whose regular presence never quite makes sense. The funny faces keep popping up — Jessica St. Clair is here, too — and letting us down.

It seems as though Netflix, whose exclusive streaming deal with “The Office” ends later this year, is trying to fill in an anticipated gap with “Space Force.” But there is a lack of vision in the show they devised, as it veers awkwardly between farce and drama, spoof and romcom. It qualifies as the year’s biggest TV disappointment so far.