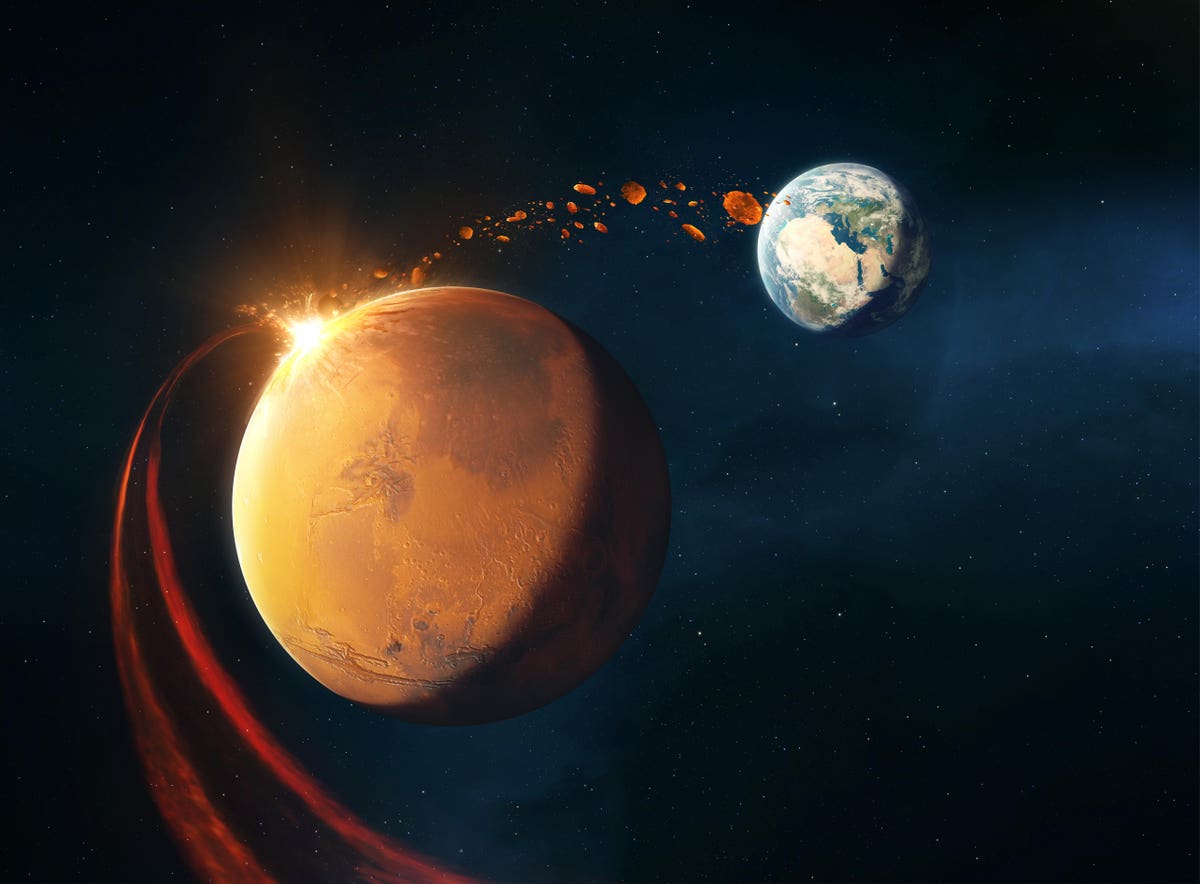 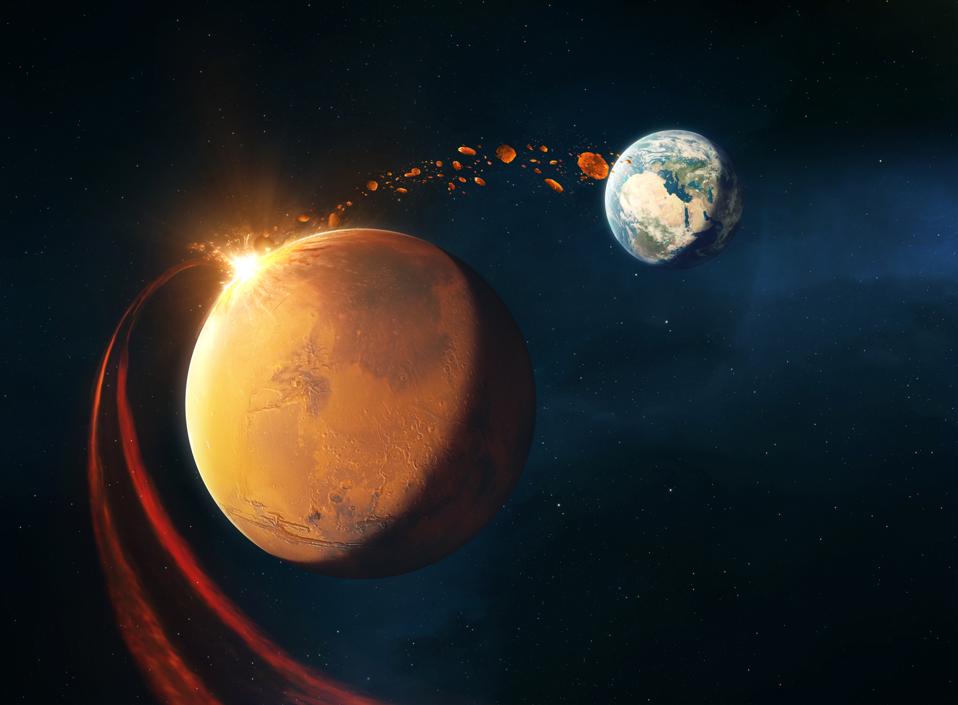 “Lithopanspermia” involves a comet or asteroid striking a planet, in this case Mars, which then … [+] ejects biologically-rich matter into space, eventually settling on Earth. (Illustration by Tobias Roetsch/Future Publishing via Getty Images)

Imagine if NASA’s Mars Perseverance rover—now on its way to the red planet—discovered microbial life there.

It would change everything we know about life in the Solar System and far beyond.

Or would it? What if we accidentally transported life to Mars on a spacecraft? And what if that is how life moves around the Universe?

A new paper published this week in Frontiers in Microbiology explores the possibility that microbes and extremophiles may migrate between planets and distribute life around the Universe—and that includes on spacecraft sent from Earth to Mars.

This is the controversial theory of “panspermia.”

It’s an untested, unproven and rather wild theory regarding the interplanetary transfer of life. It theorizes that microscopic life-forms, such as bacteria, can be transported through space and land on another planet. Thus sparking life elsewhere.

It could happen by accident—such as on spacecraft—via comets and asteroids in the Solar System, and perhaps even between star systems on interstellar objects like ʻOumuamua.

However, for “panspermia” to have any credence requires proof that bacteria could survive a long journey through the vacuum, temperature fluctuations, and intense UV radiation in outer space. 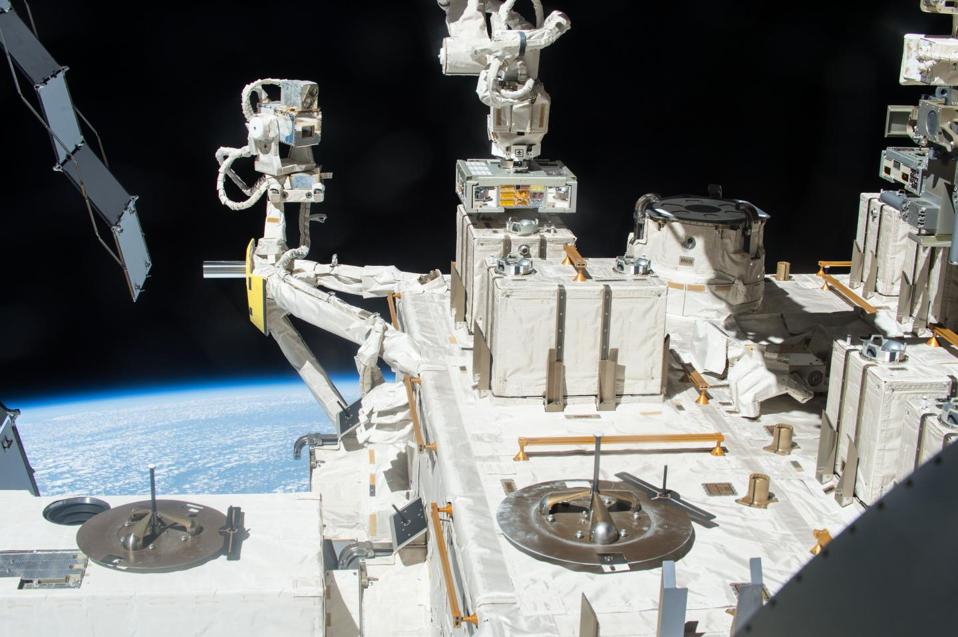 The bacterial exposure experiment took place from 2015 to 2018 using the Exposed Facility located on … [+] the exterior of Kibo, the Japanese Experimental Module of the International Space Station.

What is the ‘Tanpopo’ mission?

Tanpopo—dandelion in English—is a scientific experiment to see if bacteria can survive in the extremes of outer space.

The researchers from Tokyo University—in conjunction with Japanese national space agency JAXA—wanted to see if the bacteria deinococcus could survive in space, so had it placed in exposure panels on the outside of the International Space Station (ISS). It’s known as being resistant to radiation. Dried samples of different thicknesses were exposed to space environment for one, two, or three years and then tested to see if any survived.

They did, largely by a layer of dead bacteria protecting a colony beneath it. The researchers estimate that a colony of 1 mm of diameter could potentially survive up to 8 years in outer space conditions.

MORE FROM FORBESThe Brightest Star In The Night Sky Rises Today (And No, It’s Not The North Star)By Jamie Carter

What does this mean for ‘panspermia?’

“The results suggest that deinococcus could survive during the travel from Earth to Mars and vice versa, which is several months or years in the shortest orbit,” said Akihiko Yamagishi, a Professor at Tokyo University of Pharmacy and Life Sciences and principal investigator of Tanpopo.

However, this isn’t just about Earth and Mars—the ramifications of panspermia, if proven, are far-reaching.

“The origin of life on Earth is the biggest mystery of human beings (and) scientists can have totally different points of view on the matter,” said Dr. Yamagishi. “Some think that life is very rare and happened only once in the Universe, while others think that life can happen on every suitable planet.”

“If panspermia is possible, life must exist much more often than we previously thought.”

MORE FROM FORBESA Waxing Moon Visits Jupiter And Saturn: What To Watch For In The Night Sky This WeekBy Jamie Carter

This is bacteria surviving in space for a long period when shielded by rock—typically an asteroid or a comet—which could travel between planets, potentially spreading bacteria and biologically-rich matter around the Solar System.

However, the theory of panspermia goes even further than that.

What is ‘interstellar panspermia’ and ‘galactic panspermia?’

This is the hypothesis—and it’s one with zero evidence—that life exists throughout the galaxy and/or Universe specifically because bacteria and microorganisms are spread around by asteroids, comets, space dust and possibly even interstellar spacecraft from alien civilizations.

In 2018 a paper concluded that the likelihood of Galactic panspermia is strongly dependent upon the survival lifetime of the organisms as well as the velocity of the comet or asteroid—positing that the entire Milky Way could potentially be exchanging biotic components across vast distances.

Such theories have gained credence in the last few years with the discovery of two extrasolar objects Oumuamua and Borisov passing through our Solar System.

However, while the ramifications are mind-boggling, panspermia is definitely not a proven scientific process.

There are still many unanswered questions about how the space-surviving microbes could physically transfer from one celestial body to another. 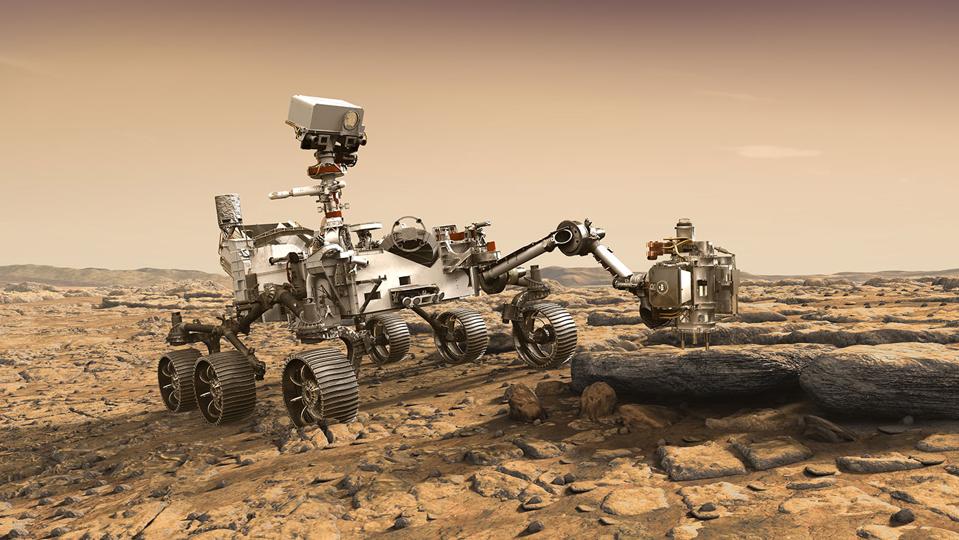 Illustration of NASA’s Mars 2020 Perseverance rover studying a Mars rock outcrop (not to scale). … [+] Mars 2020 is targeted for launch in July/August 2020 aboard an Atlas V-541 rocket from Space Launch Complex 41 at Cape Canaveral Air Force Station in Florida.

NASA/JPL-CaltechMORE FROM FORBESWas Our Sun A Twin? If So Then ‘Planet 9’ Could Be One Of Many Hidden Planets In Our Solar SystemBy Jamie Carter

How will Perseverance look for life on Mars?

NASA’s Perseverance rover is due to land on the red planet on February 18, 2021. It will land in a nearly four billion-year-old river delta in Mars’ 28 miles/45 kilometers-wide Jezero Crater.

It’s thought likely that Jezero Crater was home to a lake as large as Lake Tahoe more than 3.5 billion years ago. Ancient rivers there could have carried organic molecules and possibly even microorganisms.

Perseverance’s mission will be to analyze rock and sediment samples to see if Mars may have had conditions for microorganisms to thrive. It will drill a few centimeters into Mars and take core samples, then put the most promising into containers. It will then leave them on the Martian surface to be later collected by a human mission in the early 2030s.