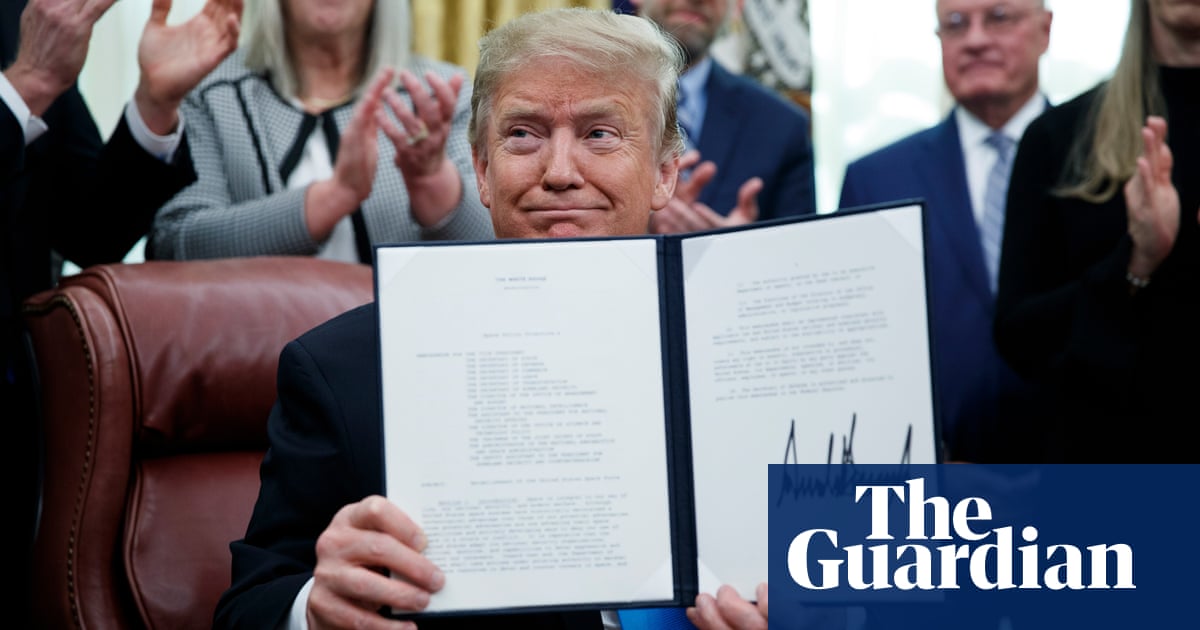 Donald Trump on Tuesday directed the Pentagon to develop plans to create a new space force within the air force, accepting less than the full-fledged department he’d wanted.

Before signing a document instructing the defense secretary to draft proposed legislation, Trump said space was the “future” and the “next step”.

“We have to be prepared,” he said in the Oval Office, flanked by vice-president Mike Pence, the acting defense secretary, Patrick Shanahan, and other top officials.

Trump initially said he wanted a space force that was “separate but equal” to the other military services. The current proposal falls short of that goal and faces some skepticism among lawmakers.

If approved by Congress, the space force would be part of the air force, just as the US Marine Corps is part of the navy. It would not have its own full-blown bureaucracy, including a civilian secretary. It would instead have a Senate-confirmed undersecretary for space within the air force.

It would be the first new uniformed military service since 1947, when the air force was created after the second world war.

The president’s lofty vision for a space force became a hit at his campaign rallies last year, with supporters cheering and applauding the mere mention of a military force devoted to policing outer space. But the idea encountered resistance both inside and outside the administration among those who questioned the need and the potential costs.

Before Trump ordered the Pentagon in June 2018 to begin laying the groundwork for a space force, then defense secretary, Jim Mattis, had publicly questioned the wisdom of adding a separate service for space. Mattis agreed, however, that the Pentagon needed a more effective way of defending its interests in outer space.

Mattis’s lack of enthusiasm for creating a sixth military service after the army, navy, air force, marines and the coast guard was among his many differences with Trump. He has since resigned.

The House has been supportive of creating a space force within the air force, along the lines of what Trump proposed on Tuesday. Senate support is less clear but seems likely to swing in Trump’s favor. Representative Mac Thornberry of Texas, the senior Republican on the House armed services committee, said on Tuesday that Trump’s approach was “an important step toward real reform of national security space”.

Shanahan, a former longtime Boeing executive who took over as acting defense secretary on 1 January, had spearheaded Pentagon planning for a space force in his previous role as deputy defense secretary. Shanahan has not shifted from the path that was set before Mattis resigned and has stressed his interest in keeping the space force as economical as possible.

“It’s going to be small, as small as possible,” Shanahan said last month, explaining his recommendation to Trump that a space force be part of the air force.

Some questioned whether having a space force would increase the odds of armed conflict in space.

“There are much better ways to protect satellites,” said Laura Grego, a senior scientist at the Union of Concerned Scientists. “Space security cannot be achieved unilaterally or solely through military means. It will require coordination and cooperation with other spacefaring nations. That means diplomacy.”

Under a legislative proposal being reviewed by the White House, the space force chief of staff would work within the air force and also be a member of the Joint Chiefs of Staff, the group of top uniformed military leaders who advise the president and defense secretary. A civilian undersecretary of the air force for space would be appointed by the president and confirmed by the Senate.

Cost estimates were not provided Tuesday. They are to be included in the 2020 budget proposal Trump is expected to send to Congress next month.

White House officials said seeing the space force become a separate military department remained a goal. But they said that, after hearing concerns from Congress, a decision was made to avoid going that route at the outset since it would have meant spending a lot of time building a bureaucracy and not focusing on the mission.

The directive requires the defense secretary to conduct periodic reviews to determine when it would make the most sense to propose a standalone space force department.