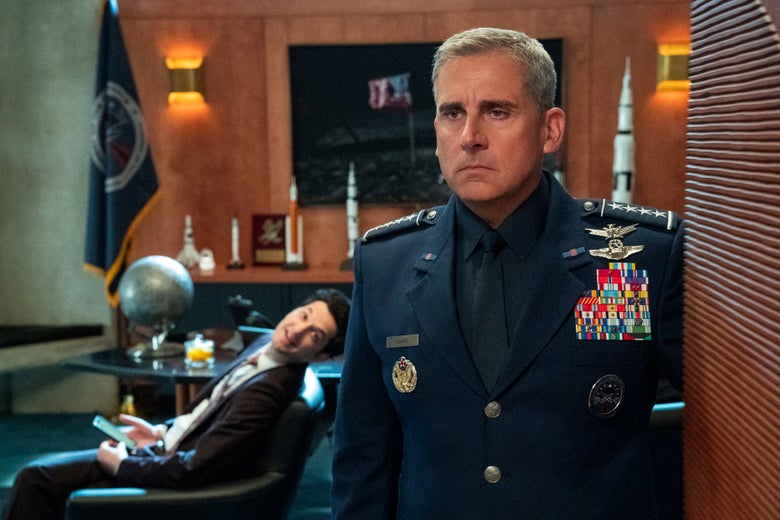 In 2005, NBC began airing a workplace sitcom about a paper company located in Scranton, Pennsylvania. At first, The Office, like the British series on which it was based, took a cynical view of the 9-to-5 grind: It was all literal paper-pushing. The employees of Dunder Mifflin were wasting their lives away, stuck in budget ergonomic desk chairs with difficult colleagues they saw more than family. Beneath fluorescent lights and drop ceilings, they measured out their lives in mediocre cups of break-room coffee, hounded by a blowhard of a boss who made everything worse. A teapot despot who longed to be cool, Michael Scott (Steve Carell) was excruciatingly insecure, so desperate for approval he could only mandate it.

This version of The Office, one that was emotionally, not just structurally, modeled on its British predecessor, didn’t last. Americans like our sitcoms and our workplaces light and sweet. In its second season, the show adapted for American television by Greg Daniels changed to appeal to our sweet tooth. If we spend more time with our co-workers than our kin, The Office would turn the workplace into a makeshift family, instead of the family’s poor substitute. If our bosses have an improper impact on our happiness, than Michael Scott would become an increasingly decent father figure, not a mercurial blowhard.

Carell, who had gone all in on Michael’s unctuous blathering, was allowed to play to his strengths, his ability to imbue even the most absurd behavior with sincerity and earnestness. Michael was transformed from a slime ball with slicked-back hair into a lovable buffoon, his hair now parted neatly to the side. He was a fool so indefatigable he would wear you down and win you over, becoming less and less foolish as the show went on. This new, gentler, American version of The Office and Michael Scott became an NBC fixture, a beloved sitcom that has only become more beloved since ending in 2013, particularly on Netflix, where it is always one of the streamer’s most popular shows. When Netflix paid Carell and Daniels to team up again, they must have been hoping for a show like The Office, but not in the sense that it took an entire season to figure out how to use its star. Unfortunately, that’s exactly how Space Force, co-created by Carell and Daniels, is like The Office, with no guarantee it will figure things out.

Carell stars as Gen. Mark Naird, an uptight career military man given the unenviable task of launching a new branch of the military. Naird is not Michael Scott. In a New York Times piece, Daniels explained that Michael Scott, who only cared about being liked, would “do anything that anybody else suggested” while Naird, in contrast, “is very inflexible.” Rigidity, not malleability, is Naird’s problem, but it’s as grating as flecks of finger flesh in the shredded cheese. In a characteristic early episode, Gen. Naird screams his way through an emergency, ignoring everyone to keep doing what he pleases—in this case, trying to get a monkey to fix a spaceship. A hectoring, stubborn, would-be alpha male who only begins to soften late in the season, in what feels like an emergency course correction, he seems very far from the “great leader” Daniels describes in the same New York Times piece.

Workplace comedies depend on audiences getting to know the interconnected, dysfunctional dynamics of a small group of people; the fun and the laughter come from the way the show upends, riffs, and delivers on relationships we already understand. But Space Force is unhelpfully sprawling, taking place on a vast base in the middle-of-nowhere New Mexico, with a sneakily huge cast. Characters include the social media–obsessed press secretary F. Tony Scarapiducci (Ben Schwartz, basically doing Jean-Ralphio), a spiky female pilot (Tawny Newsome), Naird’s father (the final appearance by the late Fred Willard), Jessica St. Clair as Carell’s potential love interest, Lisa Kudrow as his incarcerated wife, Booksmart’s Diana Silvers as Naird’s bored and rebellious daughter, a maybe Russian spy, a dopey one-star general, a team of would-be astronauts, and another team of scientists that includes Silicon Valley’s Jimmy O. Yang and is headed up by John Malkovich, the best thing about the show.

Malkovich’s character, Dr. Adrian Mallory, would be an ideal protagonist, a sardonic scientist on a hero’s quest to keep space from being militarized by a bureaucracy full of goons. Instead, he’s a supporting character, and one of the goons is the show’s lead, so we get fewer deliciously particular line readings and way, way more shouting.

Space Force sometimes seems to be going for something Veep­-ish. Veep creator Armando Iannucci’s flawed follow-up, Avenue 5, was also set in space, aboard a luxury spacecraft marooned at the far reaches of the galaxy. Taken together, the two shows suggest that space may not be a particularly hospitable setting for sitcoms from established sitcom geniuses. Naird regularly returns to Washington, where he has to tangle with the other heads of the armed services (Jane Lynch, Patrick Warburton, Diedrich Bader) and in particular his nemesis, Kick Grabaston (Noah Emmerich). These scenes have a Dr. Strangelove look and a Veep-ish intensity. The jokes and insults fly, dark, fast, mean, and satirical, but never quite dark, fast, mean, and satirical enough. Space Force sort of seems to take place in our moment—the president is as mercurial and Twitter-obsessed as the current one—but it doesn’t have Iannucci’s deranged skill with the over-the-top insult or his ruthlessness and clarity about his characters and a military out to colonize space. The show wants to be acid and cutting but there’s a streak of toothless gentleness that turns the whole thing, unwelcome as a dash of sweet cream in a jar of pickle juice.

The other show Space Force bears comparing to is Daniels’ other new sitcom, Amazon’s Upload. That show, set in a near future where dead people’s consciousnesses are uploaded to various afterlife resorts is almost Space Force’s inverse. It’s set in a fascinatingly detailed, clever, and inventive new world, and plainly working over big ideas, but it stars a bland leading man who can barely get agitated about anything. Despite its caustic class analysis, it almost has too much heart. It plays like a romantic drama with sitcom trappings, but it was one I enjoyed watching, even if I never laughed. Space Force has too little heart and no clear perspective on the military institutions and leading man it has made deeply unappealing, by accident. (If you want a clue to what went wrong, check that same New York Times piece for Carell and Daniels’ assertion that they wanted to make it fundamentally respectful of the military.) Space Force is not exactly embarrassing—everyone involved is too talented— but it is shockingly unfunny for a show made by people who are so talented. Having already fixed one show, they might be able to fix this one, which suffers from some of the same ailments. But it’s a different time. Even if Space Force can manage to get good next season, it might still be too late.