The official logo of the US Space Force, revealed by Donald Trump on Twitter, has proven controversial on social media with some calling it a Star Trek knock-off.

Created in “consultation with our Great Military Leaders, designers, and others”, the circular seal features an arrow-shaped spaceship and a NASA-like white swoosh, superimposed on a simplified universe backdrop.

Also emblazoned on the badge is the year 2019 in Roman numerals, in reference to the Space Force’s inception as the sixth branch of the US Armed Forces last December.

Among the design world figures taking to social media to share their thoughts was Pentagram partner Michael Bierut, who tweeted at Trump: “Thanks for the great presentation, you’ve given us a lot to think about”

Bierut added that he felt “personally attacked” by the president’s choice to lowercase the word designers.

Other commenters likened the design to the Star Fleet logo from cult TV show Star Trek, which features a similar, angular spaceship alongside stars and a dramatic swoosh.

Even former cast member George Takei proclaimed his agreement, tweeting: “We are expecting some royalties from this…“

In a statement posted on Facebook, Space Force officials defended the design saying: “The delta symbol, the central design element in the seal, was first used as early as 1942 by the U.S. Army Air Forces; and was used in early Air Force space organization emblems dating back to 1961.”

“Since then, the delta symbol has been a prominent feature in military space community emblems,” the statement continued. 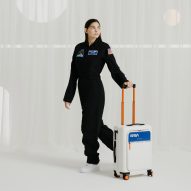 As with many of President Trump’s initiatives, the idea of creating a Space Force proved immediately polarising when he first endorsed it in March of 2018.

Despite millitary officials calling it unnecessary, the Space Force was officially created last month as part of a $738 billion (£564 billion) military spending bill passed by the US Congress.

It is the first new US military branch to be introduced since the launch of the Air Force in 1947, and now forms part of the existing Air Force department.

Unlike NASA, an agency whose aim is to “discover and expand knowledge for the benefit of humanity“, the objective of this new armed service branch is to protect U.S. and allied interests – as well as assets such as satellites – in space.

More recently, this month’s reveal of the Space Force uniforms proved similarly controversial, as commenters doubted the usefulness of a traditional camouflage pattern against the black backdrop of the universe.

Elsewhere, designers have been looking at space as the final frontier not for the military, but for the tourism industry.

Luggage brand Horizn Studios collaborated with the world’s youngest astronaut to develop a suitcase that could endure space travel, while the Gateway Foundation is designing the first commercial space hotel.

Dezeen Daily is sent every day and contains all the latest stories from Dezeen.

Dezeen Weekly is a curated newsletter that is sent every Thursday, containing highlights from Dezeen. Dezeen Weekly subscribers will also receive occasional updates about events, competitions and breaking news.

We will only use your email address to send you the newsletters you have requested. We will never give your details to anyone else without your consent. You can unsubscribe at any time by clicking on the unsubscribe link at the bottom of every email, or by emailing us at privacy@dezeen.com.

You will shortly receive a welcome email so please check your inbox.

You can unsubscribe at any time by clicking the link at the bottom of every newsletter.