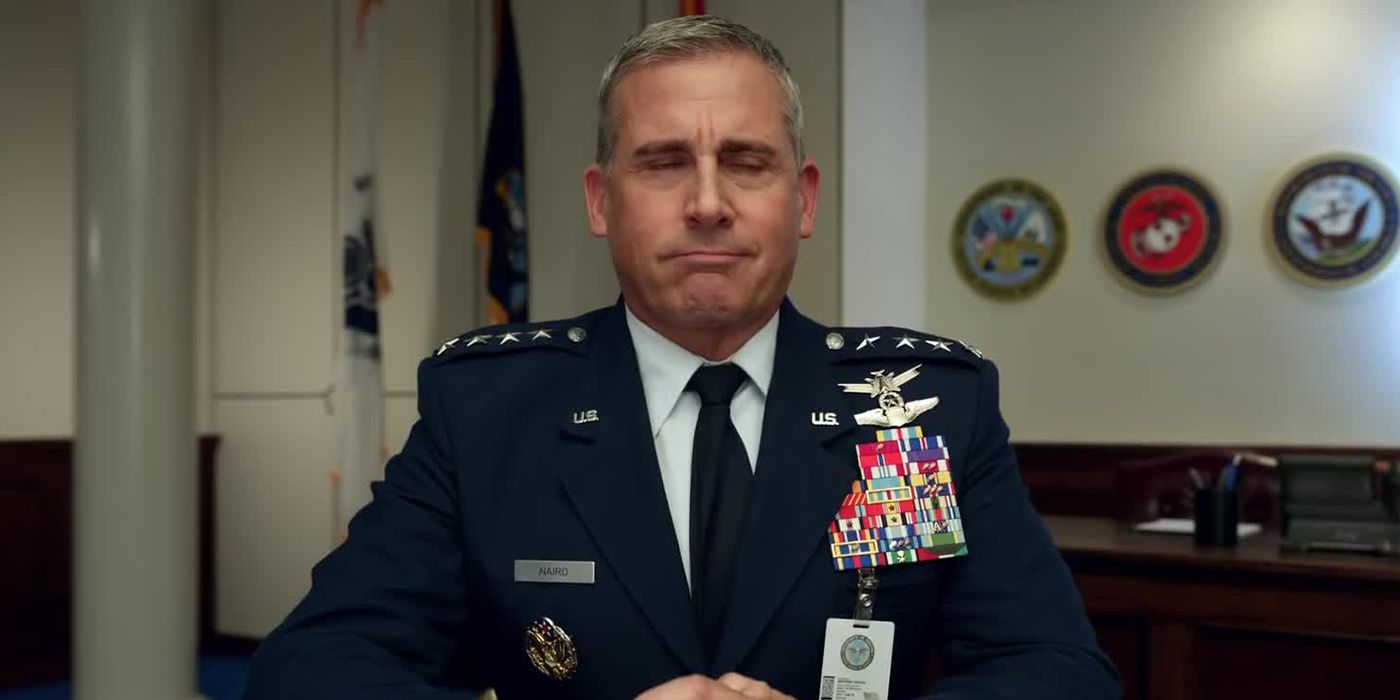 Space Force is sporadically funny when it leans into its goofier elements, although the absurdities and serious moments often undermine each other.

As Space Force co-creator and star Steve Carell notes in the press materials, the series started as nothing more than a title presented by Netflix as a blank slate on which to develop a series. The real-life Space Force, touted by President Donald Trump as an essential new branch of the U.S. military, has been widely mocked, and someone at the streaming service clearly saw the opportunity to capitalize on the memes and stand-up comedy bits.

There isn’t much about the 10-episode first season of Space Force that feels like it got beyond the one-joke premise, however. Carell and his The Office collaborator Greg Daniels have drawn on their Office background to create a workplace comedy with a surprising amount of earnest emotion, and the show’s mockery of the Space Force is disappointingly tame. The creators hired scientific and military consultants, and the show too often seems afraid to go too far with anything resembling satire or social commentary. Trump himself is never mentioned by name (although there are plenty of references to “POTUS” or “the president”), and despite the characters’ frequent buffoonery, the show feels like a loving tribute to the idea of the Space Force as much as a parody of it.

Carell plays General Mark R. Naird, who, as the first episode begins, has just been promoted to a four-star rank and anticipates that he’ll be taking over as the head of the Air Force, currently run by his arch-nemesis, General Kick Grabaston (Noah Emmerich). Mark is at first horrified to learn that he’ll be the first head of the Space Force, the butt of all the jokes from his fellow Joint Chiefs, but he soon throws himself into the job, and there’s a time jump to a year later before the first episode has even ended. Mark has established Space Force headquarters in the budget-friendly backwater of Wild Horse, Colorado, and he’s constantly at odds with Dr. Adrian Mallory (John Malkovich), the civilian head of the Space Force’s science division.

Mark and Adrian are meant to work together to put “boots on the moon” by 2024, per the president’s orders, but of course, the gruff military commander and the sensitive scientist don’t get along. Plus, they’re surrounded by the typical workplace-sitcom assortment of weirdos and losers (and the occasional competent employee). Ben Schwartz plays F. Tony Scarapiducci (an obvious nod to short-lived White House communications director Anthony Scaramucci), Space Force’s obnoxious head of media relations, whose main interest is posting retweetable catch phrases. Don Lake plays Brad Gregory, the genial but dim one-star general who serves as Mark’s assistant. Alex Sparrow plays a Russian liaison who insists on being called “Bobby” and is blatantly a spy.

Amidst all the bluster, Captain Angela Ali (Tawny Newsome) and Dr. Chan Kaifeng (Silicon Valley’s Jimmy O. Yang) may be the only people who actually know what they’re doing and can accomplish the Space Force’s goals without screwing up. Still, Mark and Adrian are both clearly good at their jobs, even if their need to compete with each other often gets in the way of effective operations. Mark especially suffers from inconsistent characterization, which ranges from suggesting a bomb as the solution to a broken satellite to giving a stirring speech about space exploration to a congressional subcommittee, depending on the needs of the scene or the episode.

Although Office fans might expect or hope that Daniels and Carell would turn Mark into Michael Scott as a military general, Mark is much more intuitive and empathetic than Carell’s Office character, and he’s a more effective leader, too. As the season goes on, the scope of the plot expands beyond Space Force headquarters, and the higher the stakes, the less amusing the show becomes. The creators are best at poking fun at the idea of these combat veterans enacting the sci-fi whims of an unhinged president, but when the show takes itself seriously, it almost feels like a military recruiting ad — and not a particularly effective one.

The topical political references, from the president to Scarapiducci to a New York congresswoman with the initials AYC (referred to as “angry young congresswoman”), are pretty toothless and clumsy, and Space Force doesn’t really have anything to say about the modern military. Furthermore, all of the subplots about Mark’s resentful teenage daughter, Erin (Diana Silvers), who’s unhappy about living in Wild Horse with Mark while her mother (Lisa Kudrow) is no longer around, are useless time-fillers. There are also multiple half-formed romances in the later part of the season that likewise feel like padding.

The show is sporadically funny when it leans into its goofier elements, although the absurdities often clash with the serious, heartstring-tugging moments in ways that undermine both. Carell remains likable and charismatic, even if his gravelly voice as Mark sounds a bit forced, and he and Malkovich (underrated for his comedic abilities) have entertaining chemistry. But the show never figures out a proper tone or approach, heading into dramatic cliffhangers in the final episodes of the season. It’s easy to laugh at the idea of a Space Force, but it turns out that it’s a lot tougher to turn that idea into a genuinely funny TV show.