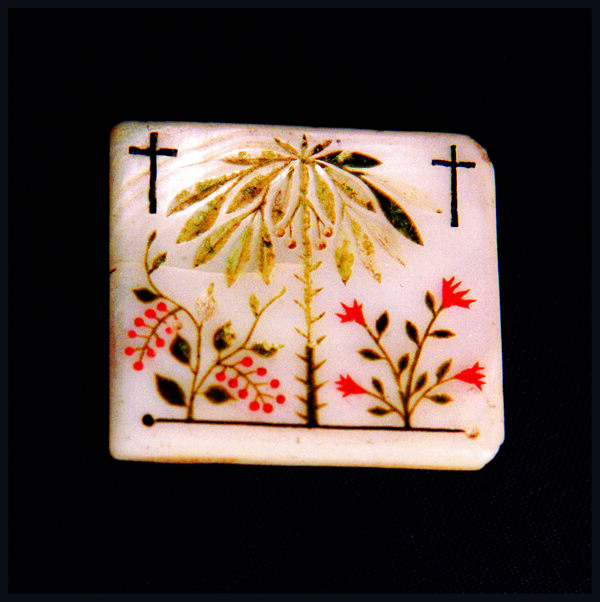 If you were traveling to outer space, what would you take with you?

Photographer Steve Pyke got to find out what items some American astronauts felt were significant enough for that. Starting in 1998, Pyke began a series of portraits of his childhood heroes who had traveled to space or walked on the Moon in the late 1960s and early 1970s, but he also photographed objects that had made the journeys with them. There were the wonderfully geeky working items: a case used to bring the first lunar rock back to Earth on Apollo 11 in 1969, a Camillus folding knife issued as part of astronaut survival kits, the geological hammer used during Apollo 12. “I can remember when Alan Bean from Apollo 12 put this hammer into my hand,” Pyke writes in an email, “and it was something really magical as I realized this object—the one I was holding—had been on the Moon. It wasn’t a hammer anymore; it was a relic—almost a religious relic.”

But then there were more personal and sometimes surprising artifacts that orbited the Earth, and some that even made the roughly 500,000-mile round-trip journey to the Moon: a figurine of a Madonna, an unopened bottle of brandy, and quotes from the likes of Thornton Wilder and John F. Kennedy. Astronaut Rusty Schweickart brought those quotes, as well as a copy of the Declaration of Independence, on pieces of lightweight onionskin paper tucked inside his tunic during Apollo 9, an orbital mission that tested the lunar modules. “To him, they were pieces of wisdom from Earth that would remain up there, on his person, even if he was lost during the mission,” Pyke writes. “They called him the hippie astronaut but the words he chose were amazing,” among them this passage from a 1961 speech by then-President-Elect Kennedy:

a tiny sculpture, and two golf balls. Most material was left behind to free up weight for the return trips. Each lunar astronaut was allowed only two pounds of personal items that they could bring back, so the items they chose can be curious, odd, and personal—and bewitching enough for Pyke to photograph. The talismanic quality of these photos is what caught the eye of Bob Ahern at Getty Images, which holds the images. As Director of Archive Photography, Ahern is aware of the power of Pyke’s pictures of these little, unexpected things related directly to some of the biggest spectacles of the 20th century: rockets blasting off launchpads, tense mission control rooms, or incredible views of Earth never before seen.

“The objects that are documented here—the quiet and intimate minutiae—give us access to the very personal, psychological, and human side to the journey into space,” Ahern writes in an email. “What is it that these astronauts and pioneers wanted to take with them on their ultimate journey into the unknown, and why are we fascinated by that?” Pyke’s photos show objects that are special enough by themselves. “By forensically documenting these objects suspended in time, we study them like relics. Scouring them for meaning and looking for signs of their journey, and in doing so it is hard to resist uniting the personal with the universal,” Ahern adds. “Photography allows us to pause and to wonder, to question and to connect.”