The head of U.S. Space Force, the U.S. military’s newest branch, had said publicly for the first time that the Russian government has conducted two on-orbit anti-satellite weapon tests in the past three years. These revelations come less than six months after the U.S. military expressed concern about a Russian “inspector” satellite that appeared to be shadowing an American KH-11 spy satellite.

Chief of Space Operations General John “Jay” Raymond, Space Force’s top uniformed officer, revealed the two apparent tests in an interview with Time for a profile of the new service. Raymond is also presently head of the joint-service U.S. Space Command (SPACECOM). That piece, which was published on July 23, 2020, offers a detailed look at where Space Force is now and where it hopes to go in the future and is worth reading in full.

“Russia is developing on-orbit capabilities that seek to exploit our reliance on space-based systems,” Raymond told Time. He explained that, on July 15, 2020, a satellite identified as Cosmos 2543 launched a projectile that could be used to destroy another craft in space.

The Kremlin describes Cosmos 2543, also sometimes written Kosmos 2543, as a “space apparatus inspector,” one of a number in orbit now, which are ostensibly intended to do just what the name says, inspect other satellites. On the face of it, this offers Russian officials a way to investigate problems with or assess damage to other space-based assets on-orbit.

However, given their small size and high degrees of maneuverability, there have been long-standing concerns that these orbital inspectors could double as spies or even “killer satellites” capable of getting close to and then disrupting or destroying other space-based platforms by any of a number of means, including electronic warfare jamming or a directed energy weapon, such as a high-powered microwave beam. They could also potentially manipulate a satellite in a way that would disable it or launch kinetic attacks, either smashing into the target themselves or launching projectiles, the latter being something that Space Force now says the Kremlin has been actively testing.

An infographic from the Defense Intelligence Agency depicting a number of ways in which one satellite might attack another, including by acting as kinetic kill vehicle.

The destruction of various satellites could easily be a key feature of any future large-scale conflict, especially during its opening stages. The U.S. military, among others, is heavily reliant on space-based systems for a wide array of functions, including early warning, intelligence gathering, communications and data-sharing, navigation and weapons guidance, and more.

It’s worth noting that another inspector satellite, Cosmos 2542, which the Russian government launched in November 2019, had actually deployed Cosmos 2543 while in orbit the following month. Time says the U.S. military has dubbed these “nesting doll” satellites, a reference to traditional Russian matryoshka dolls.

The Russian Ministry of Defense had previously announced a test involving Cosmos 2543 on July 15. However, it said that this simply involved the satellite maneuvering close to another orbital inspector, Cosmos 2535, and gathering imagery and other information in line with its publicly stated inspection mission. At that time, U.S. Space Command did note that it had detected something separating from Cosmos 2543, which it labeled Object 45915, but recorded its type as “to be determined.”

The assertion that these satellites are actually part of a space-based anti-satellite weapon system is even more significant given that Cosmos 2542 had moved into a position to shadow a U.S. KH-11 spy satellite, publicly identified only as USA 245, in January. The month before, USA 245 had shifted its own orbit, potentially to avoid hitting the smaller Cosmos 2543, which Space Force later said also appeared to be following the American satellite. 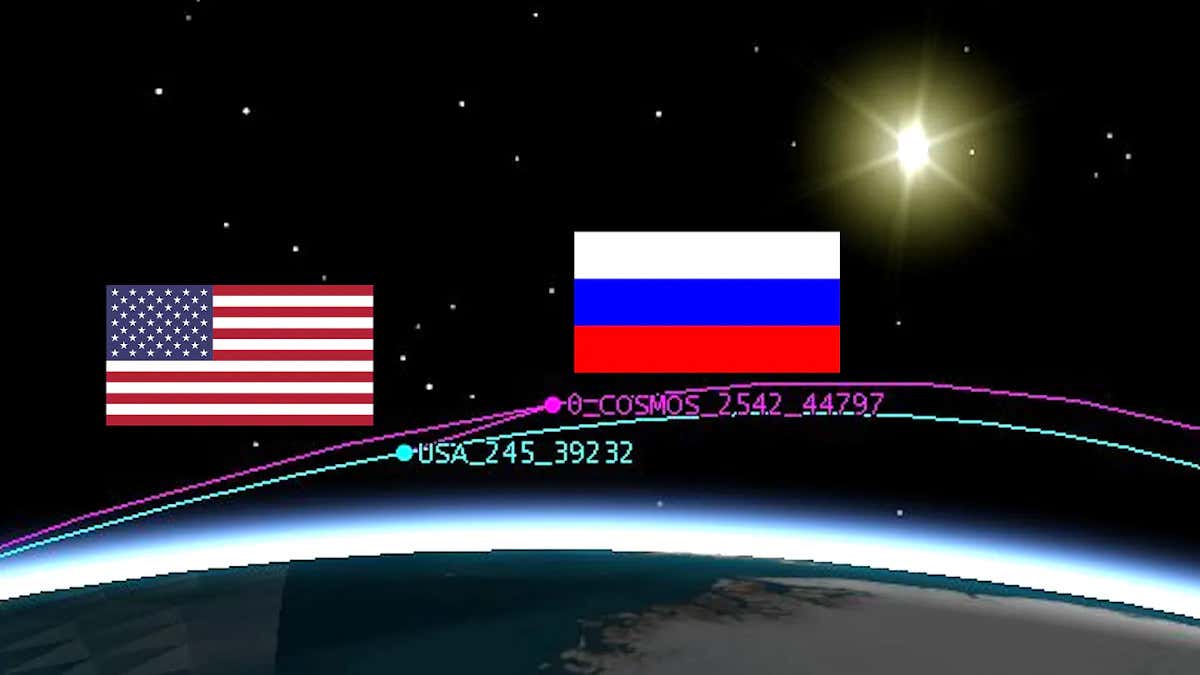 A graphical representation of the position of Cosmos 2542 with regards to USA 245 in January 2020.

“This is unusual and disturbing behavior and has the potential to create a dangerous situation in space,” General Raymond said at the time in a statement to Business Insider. “The United States finds these recent activities to be concerning and do not reflect the behavior of a responsible spacefaring nation.”

It’s worth noting that this was hardly the first instances of satellites shadowing each other in space and that U.S. government has conducted similar activities in the past, as well. However, it appears now that the U.S. military had a particular concern about what was going on in January based on existing intelligence.

General Raymond also told Time that the space-based anti-satellite weapon test on July 15 was similar to something the U.S. military had observed in 2017. He did not elaborate on that previous incident, but it seems very possible that is related to another set of “nesting doll” satellites that emerged that year. The Kremlin launched the first of these, Cosmos 2519, in June 2017. Two months later, that satellite deployed another, dubbed Cosmos 2521. These were joined by a third, Cosmos 2523, which also appeared to have been deployed on-orbit from other these other satellites, in November 2017.

If that trio is what Raymond was referring to, it’s unclear if Cosmos 2523 is what the U.S. military believes was actually an anti-satellite interceptor or if one of these satellites launched yet another object at some point.

“This is further evidence of Russia’s continuing efforts to develop and test space-based systems, and consistent with the Kremlin’s published military doctrine to employ weapons that hold U.S. and allied space assets at risk,” the head of Space Force said in a separate statement following the publishing of Time‘s piece. 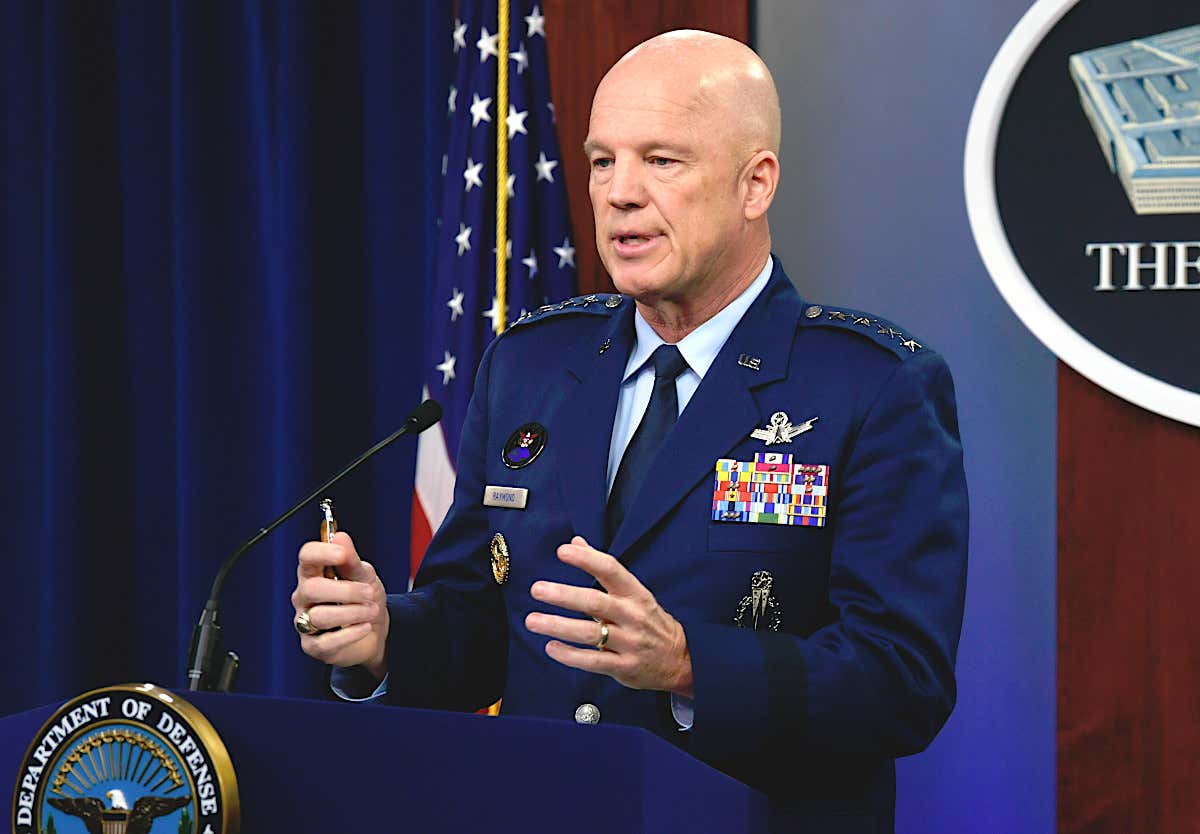 “This event highlights Russia’s hypocritical advocacy of outer space arms control, with which Moscow aims to restrict the capabilities of the United States while clearly having no intention of halting its own counter-space program – both ground-based anti-satellite capabilities and what would appear to be actual in-orbit anti-satellite weaponry,” Assistant Secretary of State for International Security and Nonproliferation Christopher Ford also said.

Russia, as well as China and others around the world, has been actively developing various anti-satellite systems, including ground-based and air-launched interceptors and directed energy weapons. In April 2020, Space Force publicly accused Russia of testing an unspecified “direct-ascent anti-satellite missile,” or DS-ASAT.

“Russia’s DA-ASAT test provides yet another example that the threats to U.S. and allied space systems are real, serious and growing,” General Raymond said in a statement after that test. “The United States is ready and committed to deterring aggression and defending the Nation, our allies and U.S. interests from hostile acts in space.”

These public statements, together with the disclosure of the earlier assessment that an on-orbit anti-satellite weapon test had taken place in 2017, also follow comments from various senior U.S. military officials about the need to declassify more about what it is doing in space and the threats that it faces, as well as how it might be able to respond. In 2019, then-Secretary of the Air Force Heather Wilson warned that the United States might have to demonstrate its own counter-space capabilities in the future in order to deter potential adversaries.

“We’ve got some education to do for the average Americans on just how reliant their lives are on space capabilities,” General Raymond told Time.

The disclosure that Russia has been testing on-orbit anti-satellite weapons certainly appears to be part of a campaign to increase public awareness of the very real threats to space-based systems that exist now and are continuing to emerge.