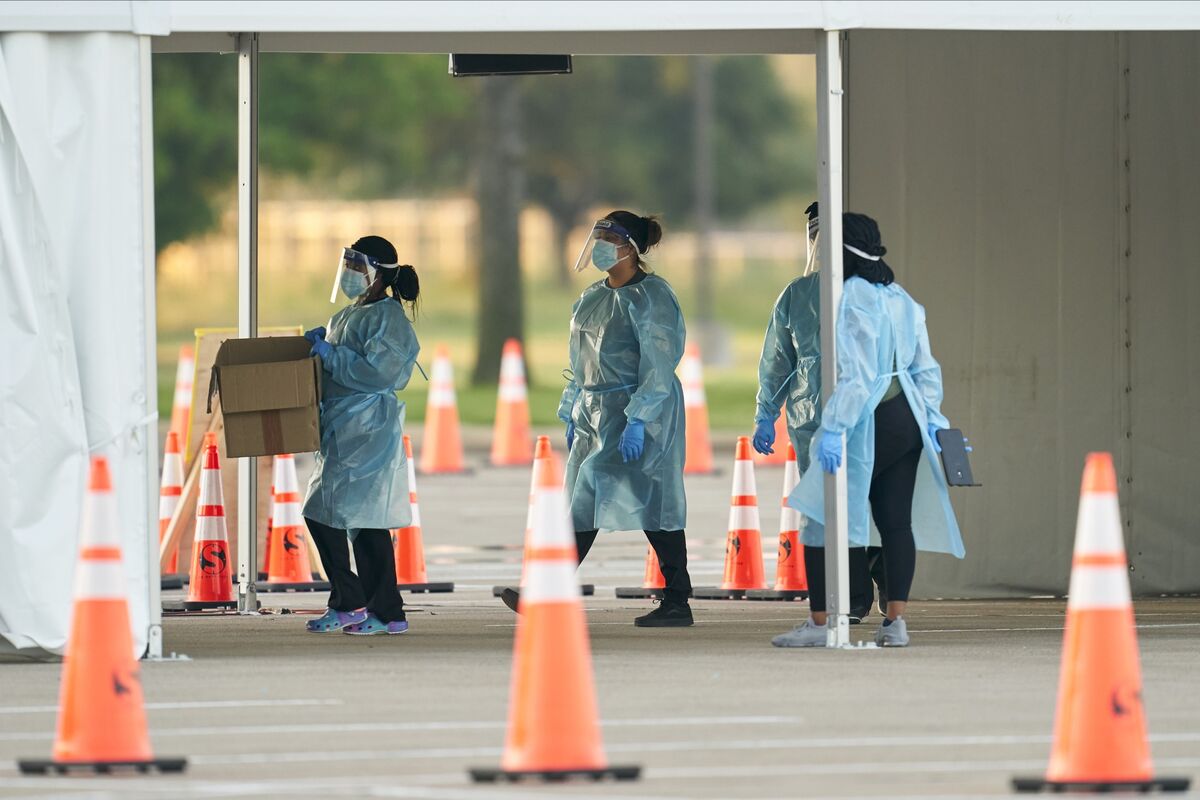 In just the past week, talks over a stimulus package stalled, bond yields jumped and an inflation gauge soared. The stock market, which is already trading at the highest levels relative to earnings in a generation, was unmoved. To explain it all, some investors point to data on the spread of Covid-19.

Daily case counts, positive test rates and hospitalizations look to be improving, as evidence grows that the peak of the virus flareup across Sunbelt states is in the past. At the same time, real-time U.S. economic data underscore a slow but steady recovery, comforting stock traders as the S&P 500 flirts with a fresh record yet again.

“We’ve seen some real positive trends,” said Ryan Detrick, senior market strategist for LPL Financial. “Those are some big positives and that’s partially why stocks are at all-time highs.”

To be sure, ascribing cause and effect in any market is a tenuous exercise, and saying any one thing — including better Covid-19 data — is boosting prices raises the risk of data snooping, or fitting facts to a predetermined narrative. Nevertheless, the virus has been a dominant theme in the 2020 stock market, a year in which a health crisis sent equities crashing into the fastest bear market on record. Now, fund managers surveyed by Bank of America Corp. are the most bullish since February and also expect a vaccine announcement to happen early in the first quarter of 2021.

As justification, investors are eying improving Covid statistics. Daily cases in the U.S. have “collapsed,” with states recently in the epicenter — Florida, California, Arizona and Texas — well off their peaks, according to Fundstrat Global Advisors’s Tom Lee. While California is coming off reporting a backlog in cases, the other three states in the bloc — which Lee’s dubbed F-CAT — have each seen daily case metrics decline at least 75% versus peak levels.

To be sure, some investors view coronavirus curve flattening and improving metrics as a double-edged sword. While great from a human health standpoint, the good news could theoretically imperil another stimulus package from Washington.

Paul Hickey, co-founder of Bespoke Investment Group, sees improvements in positive test rates and hospitalizations as good news. Testing is rising again after peaking in mid-July, and that increase has come with a decline in confirmed cases, he said. Credit strategists at BofA estimate the number of people hospitalized in the U.S. due to the virus falls about 1% a day.

“We continue to see clear signs the coronavirus is rolling over in the U.S. as the number of people hospitalized due to COVID-19 declines at a rapid pace,” wrote strategists including Hans Mikkelsen.

High-frequency readings of the economy have been improving, too. A proprietary U.S. economic activity index from Jefferies LLC that uses inputs including small business activity, restaurant bookings, traffic congestion and web traffic to state unemployment portals has improved for three weeks straight. The gauge now sits at a “fresh cycle high,” Chief Economist Aneta Markowska wrote in a report Monday.

Last week’s increase was driven by improving labor market readings, as fewer people use online unemployment sites. While consumer-oriented data continue to move sideways, “the reopening of schools and the assumed resolution of the fiscal standoff should create stronger momentum by mid/late September,” Markowska wrote.

The number of airline passengers and restaurant diners are still operating at a relatively low base when compared with pre-virus times, but traffic has been increasing as consumers slowly grow more comfortable. On average over the last week, roughly 700,000 people passed through TSA checkpoints a day, more than double the amount seen in early June. Year-over-year daily restaurant bookings through OpenTable have also been rising and are at the highest level since March on average over a seven-day period.

“It does seem like the spike that we saw beginning in June in some parts of the country is coming under some control, which is encouraging and I think markets have been encouraged by that,” said David Lefkowitz, head of Americas equities at UBS Global Wealth Management. “We’ll have to see how things progress as schools reopen. The pace of the pandemic is still one of the key narratives.”

— With assistance by Claire Ballentine

Have a confidential tip for our reporters?
GET IN TOUCH

Before it’s here, it’s on the Bloomberg Terminal.