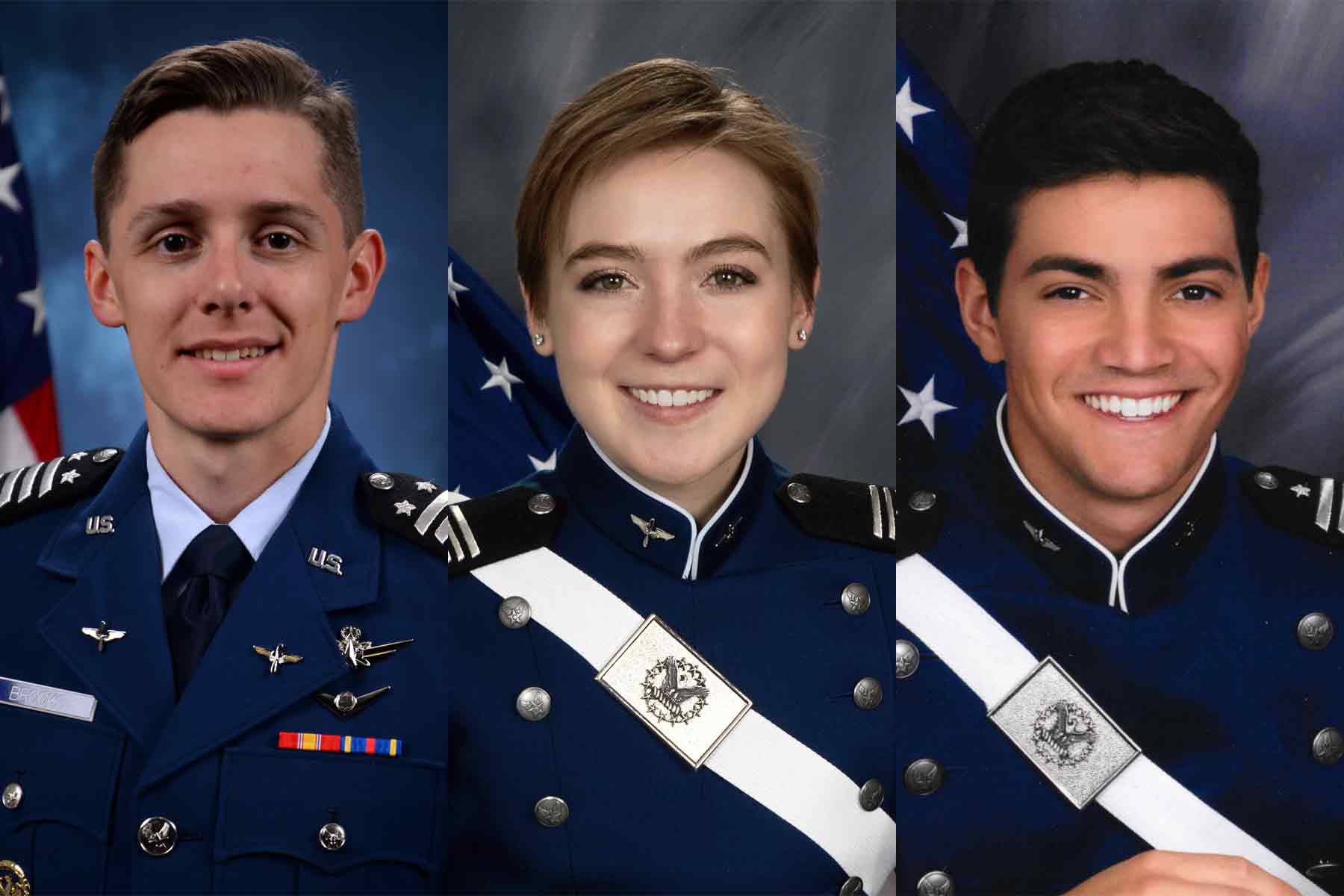 Jonathan Novak wanted to be a stealth fighter pilot. Aaron Brooks was fascinated with space ever since he was six years old. And Katie Scheibner just knew she wanted to serve her country in some way.

After four years at the U.S. Air Force Academy, these three second lieutenants walked out onto campus grounds for graduation earlier this month, donning platinum sashes around their waists to distinguish them from their fellow cadets, who wore traditional gold ones. The platinum ribbon represented a transformation: they, alongside 83 other cadets, now make up the first officers to commission directly into the U.S. Space Force, the military’s newest branch, devoted solely to space operations.

“This was just an opportunity I couldn’t pass up,” said Scheibner, a cyberspace operations officer. Scheibner, Novak and Brooks recently spoke with Military.com about their reasons for pursuing the Space Force, their thoughts on helping to craft its culture, and their thoughts on what the final frontier means to them.

Related: Space Force Is About to Start Collecting Applications from Airmen Looking to Transfer

Scheibner, who grew up in Minnesota, is one of four officers who decided to switch from the Air Force into the Space Force this year upon graduation, a coveted position as there are few cyber slots open within the newest military branch. Her work will involve the defense of space equipment and satellites. “We were all really excited and grateful to receive one of those few spots,” she said.

Like Scheibner, Novak, a developmental engineer, saw the Space Force as a gateway toward flourishing opportunities — enough to let go of his coveted pilot slot.

Ever since he saw the Air Force’s Thunderbirds flight demonstration team freshman year, flying high-end fighters like F-22 Raptors or F-35 Lightning IIs was his ultimate goal. But then something changed in January, when he heard about the chance to enter the Space Force straight from the academy.

“It all changed at the last second for me. I turned that over my head and then eventually went for it,” Novak said.

Through his chain of command, Novak reached out to Gen. John “Jay” Raymond, chief of space operations and head of U.S. Space Command, about his interest in the Space Force, telling Raymond he was ready to make the switch.

“I will always remember this email, it was just five words,” Novak said. “It was an email directly from General Raymond that said, ‘I will make that happen.'”

“He’s a really down-to-Earth leader … no pun intended,” he added.

Novak was mostly influenced by his studies, particularly his astronautics classes, and the time he spent as a space systems operator for the FalconSAT program, an Air Force Academy project under which cadets manage and maintain an actual satellite.

Brooks also participated in FalconSAT; he eventually became an instructor within the program.

“Ever since that four degree-year experience, I not only fell in love with the space career field … but also found a lot of mentors there, and that was something that really helped drive me in my choice towards going into the Space Force,” said Brooks, who said he was inspired to pursue military service by his late grandfather, a Marine pilot who flew in Korea. Brooks studied military strategy and astronautical engineering, and had the opportunity to present his research from his capstone class to Deputy Assistant Secretary of Defense for Space Policy Steve Kitay at the Pentagon.

Brooks, a Michigan native, knows he may not have the same breadth of experience as service members already executing space operations, but believes the brand-new lieutenants have something to offer: “bright and big imaginations.”

Cadets with the class of 2020 graduate at the U.S. Air Force Academy, Colo., April 18, 2020. Cadets seen here with silver sashes will be heading to the Space Force. (U.S. Air Force)

Novak, who also hails from a military family and a Maryland native, said he believes Space Force can eventually expand its mission beyond protecting earthbound warfighters by watching over assets like communications and GPS. Some day, he suggested, Space Force can defend human space flights. Air Force Secretary Barbara Barrett in December hinted at the same possibility.

“I think the mission is genuinely important,” Novak said. “We’re going to get to work with cutting-edge technologies; there’s a lot of people [who] are talented and enthusiastic about what they’re going to do, and that’s like the ultimate prerequisite to achieving great things in space.”

The lieutenants are also keeping the service’s developing culture in mind. Over the course of the next few weeks, officials say they’ll announce what Space Force troops will be called and reveal uniform designs and service insignia. President Donald Trump unveiled in the official Space Force seal in a tweet in January.

Brooks, Scheibner and Novak all said they’re looking forward to announcements on these matters, but haven’t been preoccupied with questions.

“I’ve discussed it with cadets informally,” Brooks said, though he declined to share any naming ideas that had surfaced.

At one point, Novak looked to help the service’s crowdsourcing initiative, begun in February, by sifting through Greek and Latin root words for a name to call Space Force professionals — but made no big discoveries.

On the uniform side, though, Brooks has high expectations.

“All the services have very distinctive uniforms that send [a message about] their own identities, whether it be the Army pinks and greens or the Marine Corps dress blues. From a cultural perspective, we’re all very aware that [our uniform is] going to send a message — whatever it is,” Brooks said.

“We are eager to … have something to call our own, to distinguish the Space Force and to really bind us together,” Scheibner added.

The lieutenants agreed one thing is certain: Space Force is not just a concept anymore. And some of them are struggling to convey that to their friends.

“I think space is often so romanticized, right?” Scheibner said. “When you’re a little kid, space is an opportunity to just be creative and imaginative, because it’s something that [as you] stand here on Earth and look up … it’s hard to like touch and feel or understand. But in reality, it’s one of the most cooperative and competitive domains simultaneously … it’s so complex and it’s actually quite dynamic.”

“The new ‘Space Force’ show with Steve Carell, I think, is a perfect example of how a lot of my friends might think about it,” added Brooks. “And then I go and explain to them the history of what we’ve done in space, how the first Persian Gulf War was actually referred to as the first space war by [Air Force] General [Merrill] McPeak because of the advantages that space assets gave terrestrial forces. And when I explain it from that perspective … it starts to change.”

“Now that it’s actually happening, I think that’s what almost seems surreal,” Novak said. “There’s another [element] to this conversation, and that’s that there are people who are really in tune with what’s going on in space and understand the space domain.”

The three new lieutenants’ paths won’t cross right away: Novak will start his assignment at the Massachusetts Institute of Technology before transferring to MIT’s Lincoln Laboratory, which partners with Hanscom Air Force Base in Massachusetts to conduct research in space systems and technology. Scheibner was awarded the Marshall Scholarship to attend the University of St. Andrews in the United Kingdom to study international security studies before transitioning to a cybersecurity-oriented program. Brooks next heads to Vandenberg Air Force Base, California, to begin his undergraduate base training.

“I truthfully don’t know what the future is gonna hold for me or for [Space Force],” Brooks said.

“But I do know I’m very excited to go in and learn from the people who are there, and then work side-by-side with everyone to help make this a reality.”

Editor’s Note: This story has been updated to clarify how Novak reached out to Raymond.