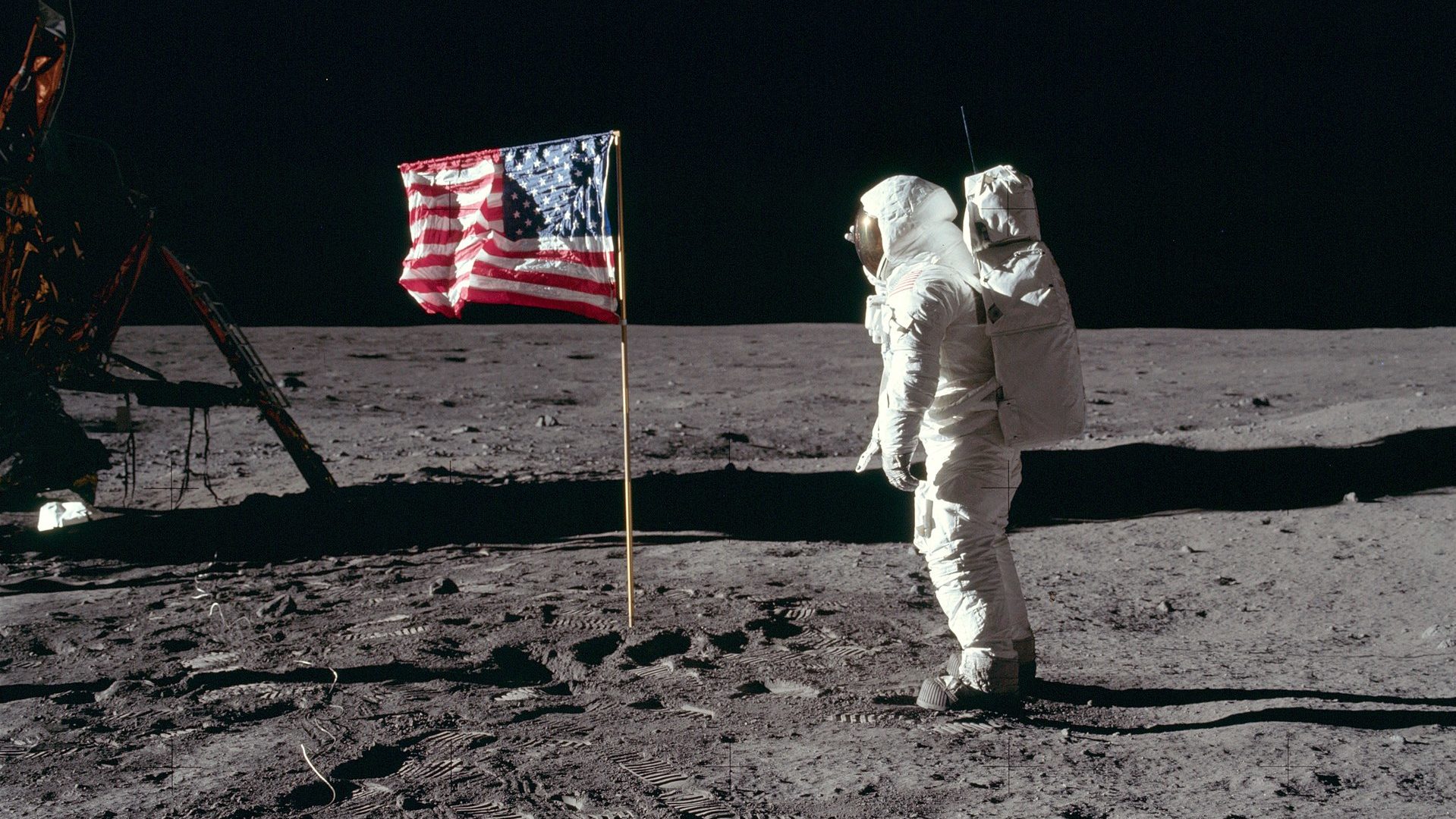 The following is adapted from a speech delivered on November 20, 2019, at Hillsdale College’s Allan P. Kirby, Jr. Center for Constitutional Studies and Citizenship in Washington, D.C., as part of the AWC Family Foundation lecture series.

In June 2018, President Trump directed the Department of Defense to “begin the process necessary to establish a space force as the sixth branch of the armed forces.” The reason for a space force is simple: space is the strategic high ground from which all future wars will be fought. If we do not master space, our nation will become indefensible.

Since that time, entrenched bureaucrats and military leaders across the Department of Defense, especially in the Air Force, have been resisting the President’s directive in every way they can. And this December, although Congress voted to approve a Space Force, it did so while placing restrictions on it—such as that the Space Force be built with existing forces—that will render it largely useless in any future conflicts.

At the heart of the problem is a disagreement about the mission of a Space Force. The Department of Defense envisions a Space Force that continues to perform the task that current space assets perform—supporting wars on the surface of the Earth. The Air Force especially is mired in an outmoded industrial-age mindset. It sees the Space Force as projecting power through air, space, and cyberspace, understood in a way that precludes space beyond our geocentric orbit.

Correspondingly, the Defense Department and Congress think that the Air Force should build the Space Force. So far, this has amounted to the Air Force planning to improve the current Satellite Command incrementally and call it a Space Force. It is not planning to accelerate the new space economy with dual-use technologies. It is not planning to protect the Moon or travel corridors in space to and from resource locations—raw materials worth trillions of dollars are available within a few days’ travel from Earth—and other strategic high grounds. It is not planning to place human beings in space to build and protect innovative solutions to the challenges posed by the physical environment. It is not developing means to rescue Americans who may get stranded or lost in space.

We have seen this kind of shortsightedness before. In the 1920s, the airplane and the tank were developed by the Army. Even the most respected military leaders at the time, Generals John J. Pershing and Douglas MacArthur, opposed independent development of the airplane and the tank because they saw them as subservient to the infantry. Infantry had always been the key to military success, and the generals’ reputations were built on that fact. For them, slow and cautious steps were prudent, and revolutionary steps were reckless.

These generals defended the status quo even to the point of court-martialing General Billy Mitchell, who had the audacity to say that the airplane was going to change the character of war and needed to be developed independently in order to achieve its full potential.

This type of status quo thinking in the 1920s resulted in needless loss of life during World War II. More airmen were lost in the European theater alone than were marines in the entire war. And countless soldiers died in America’s Sherman tanks, whose shells would bounce off Germany’s Panzer and Tiger tanks. Frontal infantry attacks were launched in order to get Sherman tanks behind the German tanks to fire at close range—the only range at which they could be effective. Many more of our fighting men would have come home and the war would have been shorter if American generals had taken a revolutionary approach to tanks and planes from the beginning.

On the other side, consider that a major reason we won World War II when we did was the revolutionary—not slow and cautious—approach we took to developing nuclear weapons with the Manhattan Project. Likewise today, instead of blindly following the bureaucrats and generals in the Defense Department, we need a Manhattan-type project in order to develop the kind of Space Force needed to meet future military challenges.

America’s greatest competitor for the high ground of space is Communist China, which is already fully engaged in building effective space capabilities. America is not, and unless it gets off the mark soon, China will dominate the economy and domain of space.

Our Air Force today can be compared to a race car that has been winning every race for the last 70 years by averaging 100 miles an hour. We are still in the lead, but China is gaining and averaging 150 miles an hour. The Chinese will quickly surpass us if we do nothing—and when they do, they will set up roadblocks that will make catching up difficult if not impossible.

Today, while America is building lighthouses and listening stations that can see and hear what is happening in space, China is building battleships and destroyers that can move fast and strike hard—the equivalent of a Navy in space. China is winning the space race not because it makes better equipment, but because it has a superior strategy. The Chinese are open about their plan to become the dominant power in space by 2049, the centennial of the end of the Communist Chinese Revolution and of the founding of the People’s Republic of China under Mao Zedong.

If China stays on its current path, it will deploy nuclear propulsion technology and solar power stations in space within ten years. This will give it the ability to beam clean energy to anyone on Earth—and the power to disable any portion of the American power grid and paralyze our military anywhere on the planet. America is developing no tools to defeat such a strategy, despite the fact that we are spending billions of dollars on exquisite 20th century military equipment.

Over the past two centuries, we have seen that technology drives economic prosperity and that economic prosperity is essential to sustaining national security. China’s plan is to profit from the multi-trillion dollar space marketplace while simultaneously acquiring global domination. We are capable of forestalling China’s plan, but only if we begin to build a Space Force soon and on the right plan. To do this, we must first understand China’s strategic goal, which is to dominate the sectors of economic growth that historically have held the key to world power: transportation, energy, information, and manufacturing.

Space presents unique economic opportunities because space technology operates on network principles. A network can deliver power, information, or goods from one node to many nodes at a fraction of the increase in cost per customer, as compared to the linear system on which most of our land-based economies are modeled. Compare the cost of sending 100 letters to the cost of sending 100 emails. A space infrastructure, by its nature, is a network system—and these types of systems will always translate to economic advantage. The first nation to build such an infrastructure will dominate the global economy of the 21st century and beyond.

China is developing the kind of technologies required to do so: hypersonic missiles and aircraft, 5G telecommunications, artificial intelligence, 3D printing, quantum computing, and robotics. Last January, China landed the Chang’e 4 spacecraft on the far side of the Moon. The mission provided valuable knowledge in terms of commercial and military applications. At one time this sort of mission was not beyond U.S. capabilities, but it is today, and it shows a commitment to space that we lack. To be sure, China has yet to achieve the ability to launch a manned spacecraft, but this is also a capability that we no longer possess—the U.S. relies on Russian rocketry to man and resupply the International Space Station.

China’s goal is to have the capability to shut down America’s computer systems and electrical grids at any time or place of its choosing, using directed energy and 5G technologies from space. Space is the strategic high ground from which China will seek to gain control of our media, businesses, land, debt, and markets. Although American companies are working on these new technologies, they are doing so in separate silos. Real power lies in tethering or combining the technologies together in space to achieve a dominant economic advantage.

If we choose to compete with China in space, we have a cultural advantage. We are more creative and innovative than China, because we have an open society and a free market. But we must be ambitious and act soon.

With the right vision and strategy for space, America can develop the means to:

Some of this may sound like science fiction, but technologies exist to achieve these goals if we can summon the will to act. Status quo thinkers in the Defense Department say that these goals are futuristic and unaffordable. But recall that The New York Times, relying on the opinions of leading scientists and engineers, predicted that airplanes were “one million to ten million years” off—a prediction made less than three months before the Wright Brothers made history at Kitty Hawk.

Engineers at countless private companies outside the military-industrial complex will assure you that we can achieve these goals, and soon. As for those who say it’s unaffordable, look to the automotive, aerospace, and tech industries, all of whose capabilities were built from profits earned in markets that valued their usefulness. The same will hold true with the marketplace of space.

Why the urgency? Because being first in space is imperative. Space will be a multi-trillion dollar market that will disproportionately benefit the first nation to build a vibrant space infrastructure and define the principles and rules of the marketplace of space. If America is first, its principles—the rule of law and the protection of liberty—will be in a position to prevail. If Communist China is first, the marketplace will look much different.

Americans must not allow themselves to be lulled into a false sense of security by reassurance from the military-industrial complex that we have the best military in the world, with the finest equipment ever made. At present this is accurate, but a superior strategy in space will render our fine equipment obsolete in short order.

To develop a proper and winning Space Force, the President and Congress should immediately enact four simple measures:

If development of the Space Force continues along the lines of what is currently planned, America will lose the strategic space race to China. This must not be allowed to happen. Our elected leaders must take action now.