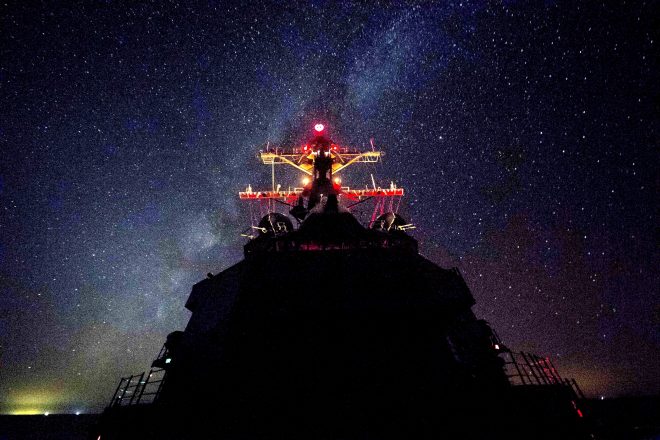 SAN DIEGO, Calif. – While some Navy personnel are helping the new Space Force take shape, the Navy’s contribution to the newest military branch will be small, a senior service official said.

“Space is kind of a big area that we are working on right now,” Vice Adm. Brian B. Brown, commander of Naval Information Forces, told an audience at WEST 2020 conference, co-hosted by U.S. Naval Institute and AFCEA. With last year’s establishment of U.S. Space Command, “there have been requirements that are coming for the fleet to support SPACECOM. As the Space Force has stood up, we have supported Space Force’s stand-up with a few billets at the headquarters, as a temporary loan.”

Eventually, the number of Navy personnel transferred into the new branch will be “small numbers, under 100 probably when we’re done,” Brown said. “But we’ll see where that goes, but a lot of effort going on inside that.”

“There is still some uncertainty about how that will completely flesh out once the Space Force opens up for lateral transfers and other things, so we’re gearing up for that,” he said. “Additionally, at the operational level, we’re missing space expertise that we need to be able to pull all of these pieces together.”

Brown said he’s also working with the chief of naval personnel on “the potential of having a small space designator within the Navy so I can professionalize the Space Cadre force,” a NAVIFOR workforce of active-duty and reserve officers from various designators who have space-related experience. “I’ve been unable to completely put my hands around because I deal with 23 different designators, all with their own career paths,” he said, “so we’re making progress there.”

“We’re going to report out in the next week or so what that might look like and the construct with CNP, and we’re going to move it forward in March to the [chief of naval operations] to see where we can go with that.”

More than 6,000 personnel are expected to be transferred into the Space Force by year’s end, officials said, drawing initially mostly from the Air Force. The first – and so far only – person transferred into Space Force is Gen. Jay Raymond, its first chief of space operations, with the rest assigned to USSF but still members of the Air Force. But since inter-service transfer of personnel is guided by statues and Congress, “we need to go through a process with Congress to have them authorize, provide authorization for specific names and specific individuals to transfer into that service,” Air Force Lt. Gen. David D. Thompson, Space Force’s vice commander, said last month at a Pentagon press conference. “And we’re working with Congress on that right now and that will take a little bit of time to complete.”

On Wednesday, Space Force officials said they expect to have 160 billets filled, along with 40 detailees assigned, as an initial organization for the service headquarters by the end of March. The fiscal 2021 budget calls for 6,434 military authorizations as the “initial cadre” of the force, along with 3,545 civilians.

“It remains the long-term vision of DoD to consolidate the preponderance of space forces of all armed forces into the U.S. Space Force, as appropriate and authorized. DoD analysis is ongoing and will determine specific units, missions, and billets that should formally transfer from across the Army, Navy and other DoD elements,” Thompson said in a prepared statement for the House Appropriations’ defense subcommittee hearing. Air Force Maj. Clint E. Crosier, director of the Space Force Planning Office, told the panel he doesn’t expect Navy, Army and Marine Corps personnel transfers until 2022, Stars and Stripes reported.

The U.S. Space Force was established on Dec. 20, 2019, as a separate military service branch. Its responsibilities include “developing space professionals, acquiring military space systems, maturing the military doctrine for space power, and organizing forces to present to our combatant commands,” according to the USSF website.