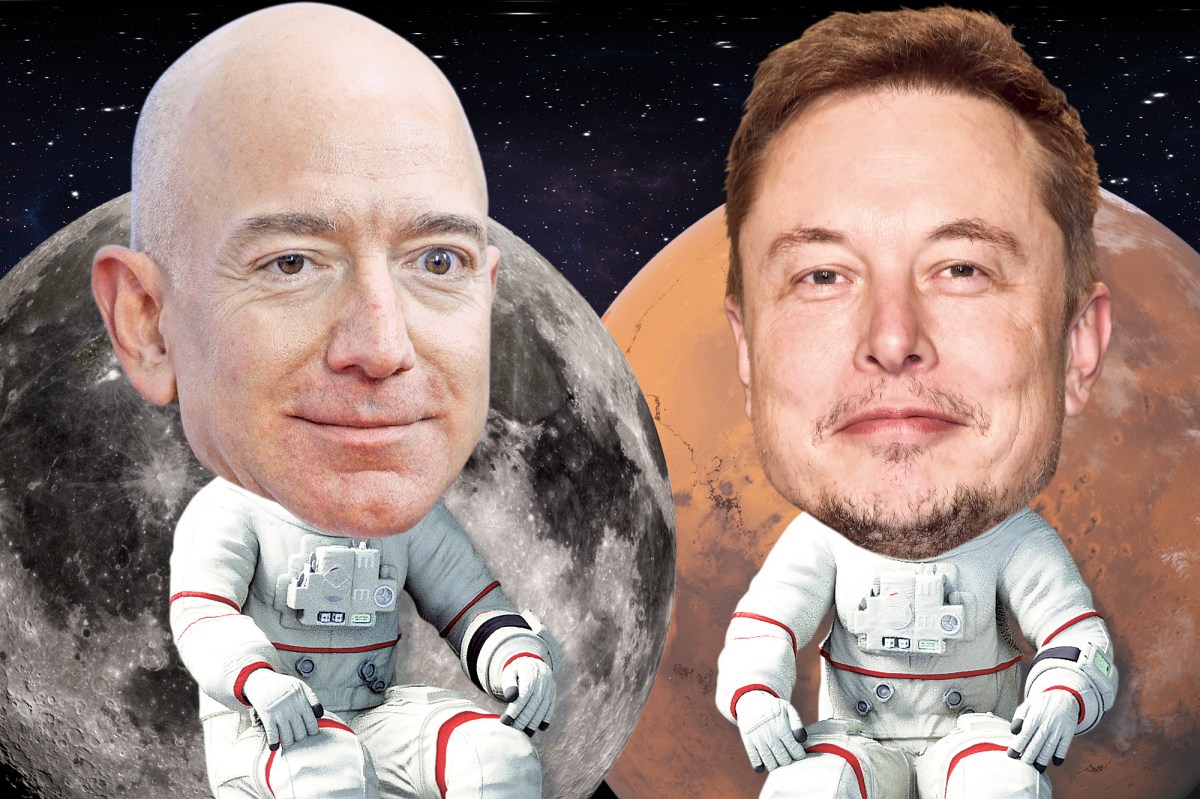 As a child, Elon Musk would read comic books and sci-fi novels and dream of fantastical worlds. Now the tech entrepreneur is on the verge of visiting one.

Musk’s focus narrowed some 20 years ago while poking around NASA’s website. He noticed that there was no timetable for a manned mission to Mars. He later called the lack of vision “shocking.”

Musk, then already a millionaire from the sale of a software company, ditched Silicon Valley for Los Angeles, in order to be closer to the aerospace industry, and set his sights on the stars.

Now the future of space is largely in his and the hands of other free-spending, big-dreaming billionaires like him, including Amazon’s Jeff Bezos.

Some answers can be found in the new book “Star Settlers: The Billionaires, Geniuses, and Crazed Visionaries Out to Conquer the Universe” (Pegasus Books) by Fred Nadis, out now.

“I see [guys like Musk] almost like medieval cathedral builders, with this multi-century project that they’re willing to take their time and their livelihood,” Nadis told The Post.

That said, the author thinks these billionaires may be dreaming a bit too big.

As Matt Damon found in “The Martian,” the Red Planet’s atmosphere is much thinner than Earth’s and the planet generates no electromagnetic field, meaning it gets pounded by cosmic rays and other harmful-to-humans energy.©20thCentFox/Courtesy Everett C

Musk, the founder of Tesla, has said that all of his earthly business ventures are just a way to fund his true passion: colonizing Mars.

His company, SpaceX, is planning to send humans to the red planet in 2024. Within a century, Musk envisions reusable rockets blasting off every two years and ferrying some 200 passengers at a time, ultimately establishing an outpost of a million people.

At its closest, Mars is some 35 million miles from Earth, and a trip would take around nine months. Once you get there, the problem explorers will face is that Mars’ atmosphere is much thinner than Earth’s and the planet generates no electromagnetic field, meaning it gets pounded by cosmic rays and other harmful-to-humans energy.

“It’s really challenging,” Nadis says. “Not quite as simple as SpaceX might make it out to be.”

Musk has offered sketchy details of what life off-world might look like. Any Mars colony would have to be self-sustaining and not rely on supplies from Earth. Musk has suggested food be grown on hydroponic farms, either underground or in an enclosed structure to protect the crops from radiation, but because Mars’ surface gets about half the sunlight Earth does, whatever plants that can be grown will likely have to be supplemented with artificial lights — and powering those lights will be no small challenge.

Musk has said farms will be powered by solar panels, though he’s offered few details.

In the same interview, the billionaire suggested Mars’ inhabitants might live under a glass dome with an “outdoorsy, fun atmosphere,” until the planet is terraformed — artificially transforming the planet to make it more Earth-like, with a livable atmosphere.

But that plan also presents a problem: A 2018 NASA-sponsored study concluded terraforming Mars is impossible, because there is not enough carbon dioxide locked in the soil to release into the air.

Musk, however, isn’t daunted. He has suggested exploding 10,000 nuclear missiles over Mars’ surface in order to melt the planet’s ice reserves, thereby releasing the carbon dioxide locked within. His company has even produced “nuke Mars” T-shirts.

Scientists are divided on whether the idea would work. Penn State climate scientist Michael Mann, for example, told US News and World Report in 2015, “There are so many things that could go wrong here, it is difficult to know where to start.”

Meanwhile, Bezos and his company, Blue Origin, are also focused on moving off-world — but onto space colonies. Bezos is worried that the Earth’s resources will be gone in a few hundred years, necessitating the need to leave.

Bezos draws much of his inspiration from the work of Gerard O’Neill, a Princeton physicist who in the 1970s laid out a grand design for space colonies.

There are so many things that could go wrong here …

O’Neill envisioned two giant counter-rotating cylinders — rotating in order to create artificial gravity — joined at each end by a rod. The massive structures could be 4 miles in diameter and at least 16-miles long.

The interior of each cylinder would offer “controlled climates and temperate weather,” with an Earth-like landscape consisting of forests, artificial rivers and mountains. To protect from cosmic radiation, the cylinders would be lined with moon rock. Plants, pigs and chickens might be raised for food. Low-gravity sports might serve as entertainment.

Colonists might reside in apartments overlooking farmland — and “living conditions in the colonies should be much more pleasant than in most places on Earth,” O’Neill wrote in 1974.

With certain technological advances, O’Neill envisioned the size of the cylinders being able to grow to encompass some 30,000 square miles, allowing room for up to 700 million people.

The colony would likely be parked in a stable orbit between the earth and the moon, first calculated by a mathematician in 1772. O’Neill has said that there is room for “several thousand colonies” there.

Bezos is a fan of O’Neill’s designs, and has said that he one day envisions “a trillion” of us living on space colonies, though Nadis predicts that’s “hundreds of years” away.

The Amazon founder said it’s his generation’s job to begin laying the groundwork for the colonies so that future generations can actually construct them.

“The kids here, and your children, and their grandchildren, you’re going to build the O’Neill colonies,” Bezos told attendees at a Washington, DC, press conference last year.

Sam Rockwell spent three years on the lunar surface in the 2009 movie “Moon” — but filmmakers never imagined him living in a lava cave.©Sony Pictures/Courtesy Everett

A colony on the moon might be a more realistic bet in some of our lifetimes. Making it to the moon has long been a dream for many, including Bezos and the Japanese tech billionaire Yusaku Maezawa, who tweeted earlier this year that he was looking for a girlfriend to join him on a trip to the orbiting body.

Nadis said the most likely habitats at first will be simple modular units, built on Earth then flown via rocket to the moon. But one tantalizing prospect is the moon’s lava tubes — seemingly massive underground tunnels made by lava flows. Living inside them would offer protection from radiation and a more stable temperature (about -4 degrees Fahrenheit) than the surface.

Scientists aren’t yet sure how big or deep these tubes are and what they might look like inside. In his influential magazine, Moon Miners’ Manifesto, sci-fi fan Peter Kokh once described a civilization of thousands of people living on the rocky terrain, almost like setting up camp in an Earth cave. Sunlight would be piped down below via shafts or optical cable bundles. Elevators would be built to carry inhabitants to the surface. Ultimately, it might be possible to seal a tube and pressurize it, just like with an airplane, creating a breathable habitat.

But one major problem none of these dreamers have been able to solve is human procreation: It may be extremely difficult in space. Never mind the challenges of having sex in diminished gravity. The radiation in space could “render males temporarily and females permanently sterile,” Nadis writes.

In one Russian experiment, rats were unable to produce babies in space, and when those space rats returned to earth and mated with regular rats, the offspring tended to have “significant abnormalities.”

Other bodily functions might suffer in space, as well. Take sleep, for example. Our bodies are cued by light exposure and the 24-hour day. On the moon, though, a “day” lasts more than 27 Earth days, severely screwing with human circadian rhythms. (Mars’ day is very similar to Earth’s.)

One solution is to equip habitats with lights that simulate the sun. The compartments then get darkened for “night.”

And what about peeing and pooping in diminished gravity? Early astronauts had to do their business in a bag (bits sometimes missed and floated around their space capsule). But, in the future, waste might be recycled. A 2017 paper in the journal Life Sciences in Space Research detailed a compact bioreactor that could recycle Numbers 1 and 2 into an edible goo.

Even with so many potential complications, Nadis appreciates the vision of the billionaire space explorers.

“What once was fringe thought — escaping to the stars — has been inching toward the center,” the author writes. “A potentially profound cultural change appears underway, as we shift from thinking of ourselves as an earthbound species to one of (potential) spacefarers.”

But, he concludes, “whether we are worthy candidates for dispersal through the solar system or galaxy remains an open question.”