Steve Carell is making his Netflix debut with a new comedy series co-created by his collaborator on The US Office.

Space Force tells the story a high-ranking general in the American military, who is placed in charge of a brand new branch with its sights set on the stars. Somewhat surprisingly, the series is inspired by real life.

In December 2019, President Donald Trump did indeed launch the United States Space Force (USSF), which has a mission to “protect US and allied interests in space” by “developing military space professionals, acquiring military space systems, maturing the military doctrine for space power, and organising space forces to present to our Combatant Commands,” according to the organisation’s official website.

In May 2020, the official flag of the USSF was added to the President’s famous Oval Office in the White House, further establishing its position in the future of US military efforts.

Of course, Netflix’s Space Force takes huge liberties with the actual organisation and is in no way a “true story,” featuring an entirely fictional cast of characters (with the exception of the President himself, who is only spoken about and never seen).

Carell plays General Mark Naird, a high ranking officer in the US military chosen to oversee Space Force with the task of putting “boots on the moon” by 2024.

In reality, the US government has not set an exact target for when they would like to send soldiers into space, but troops from the other branches of its military will transfer to Space Force in the coming months, in addition to thousands of new recruits.

The real head of the USSF is General John W. Raymond, who served for over 35 years in the US Air Force before being chosen for the new role.

While Carell’s character isn’t based on Raymond, the two do share certain similarities as Mark Naird also has a background in the Air Force, where he worked under his nemesis, General Kick Grabaston (Noah Emmerich). 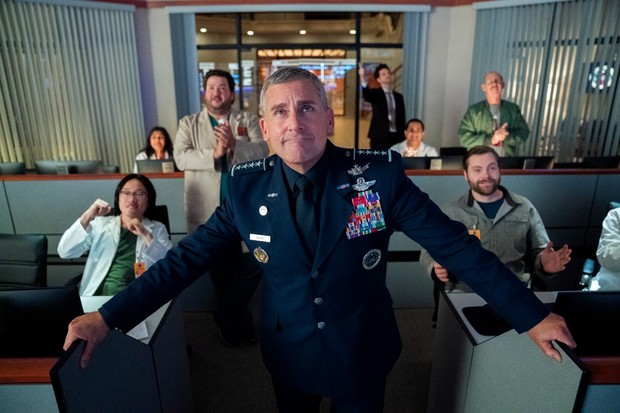