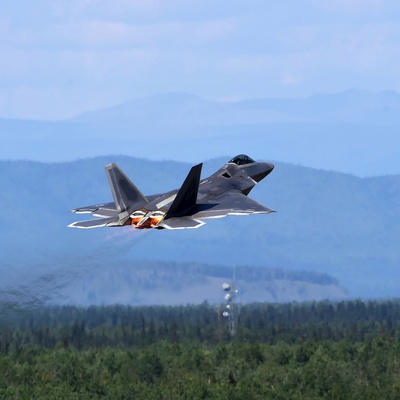 Generations of military leaders and planners have understood that the Arctic is a region of immense geostrategic significance and a critical location for protecting the homeland and projecting global power. Today, the Department of the Air Force implemented a new Arctic Strategy to maintain regional stability and protect American strategic interests.

The strategy details how the U.S. Air Force and Space Force will organize, train, and equip Airmen and Space Professionals, in cooperation with Joint Force teammates, allies, and partners, to achieve four imperatives aligned with the National Defense Strategy:

The need for the new Arctic Strategy is clear. Like space, today’s Arctic is accessible to more nations, for more commercial activity, and during more days of the year than ever.

The Arctic is the keystone for global power projection. Often unrecognized, Alaska offers the quickest flight access from mainland United States to locations across much of the Pacific region and western Russia. Additionally, with polar ice melting, new and more efficient maritime routes are opening, which is increasing accessibility to Arctic natural resources such as oil and gas reserves and rare earth metals. This is also driving an uptick in commercial traffic and international competition, including from China.

While vast Arctic expanses formerly served as a strategic buffer for the United States, technological advancements are eroding this natural geographical defense. Russia is investing in Arctic airfields and infrastructure to secure its northern approaches. In fact, no other country has as much permanent military presence as Russia above the Arctic Circle.

The Arctic is important for U.S. operations in space, which explains why the region is a major focus of the nation’s newest military service, the Space Force.

The Alaska Radar System and the 50-plus radars that comprise the North Warning System across Canada, for example, have long provided vital early warning decision space for homeland defense and the North American Aerospace Defense Command, or NORAD. Locations like Clear, Alaska and Thule, Greenland uniquely enable missile warning and defense in addition to space domain awareness, helping track more than 20,000 objects today.

The National Defense Strategy, the blueprint for defending the United States and its interests, highlights the importance of homeland defense. The 2019 Department of Defense Arctic Strategy emphasizes the essentiality of U.S. Air and Space Forces’ assets in the Arctic.

From large air bases and small training complexes to standalone early warning missile defense facilities and far-reaching radar systems across Alaska, Canada, and Greenland, Airmen and Space Professionals are positioned throughout the Arctic to defend the nation.

When Eielson Air Force Base in Alaska receives its full allotment of F-35s, Alaska will host more fifth-generation fighters than any other location in the world. This concentration of force will project power into the Indo-Pacific and Europe.

From the perspective of U.S. combatant commanders, bases in Alaska are positioned so far north and west that they are effectively forward-deployed. These bases offer access to multiple combatant commands, including significant portions of U.S. Indo-Pacific Command and U.S. European Command, while simultaneously supporting U.S. Northern Command.

U.S. Air and Space Forces collaborate closely with allies and partners in the Arctic region to increase regional security and maintain readiness through exercises and training. This past year, the U.S. Air Force conducted air-to-air training with Nordic partners in the Arctic Challenge Exercise, participated in air policing missions over Iceland, and trained with Canadian and joint partners in Arctic Edge, a homeland defense exercise. The Arctic Strategy also recognizes the significance of relationships with Arctic indigenous peoples to expand and enrich exercise and training, while respecting tribal traditions.