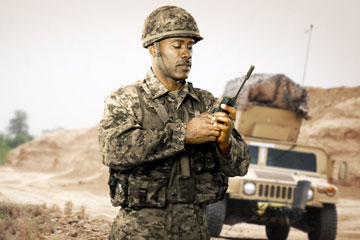 Because LEOs are so low in their orbits, a network might require as many as 60 satellites to provide coverage for most of the Earth. At any one time you may be within range of two or more of these satellites as they zoom around the planet at around 17,000 miles (27,359 kilometers) per hour, completing an entire orbit in around two hours.

Those low, fast orbits mean reliable service for much of the planet. So, if you’re a scientist with an emergency in Antarctica, you’ll rely on LEO satellites for communications.

LEOs are known for having superior call quality, lower delays (of only around 50 milliseconds one way) and greater dependability. They also need less battery power, so they don’t suck as much juice as a geosynchronous-capable terminal. However, their data transmission speeds (at around only 9,600 bits per second) are much slower than geosynchronous systems. Suffice it to say you won’t be watching YouTube if you’re on an LEO network.

But LEOs have a major selling point in that they don’t require a large antenna on your phone. Instead, these phones might be just a bit bigger than a typical smartphone, meaning they’re pocket portable.

Whether you’re using a geosynchronous or LEO system, for the best service, your phone needs a line-of-sight view to the satellite. So if you’re indoors, you may need to step outside to make a call.

With a geosynchronous constellation, particularly, line of sight can be a problem, especially if you’re in a dense forest or mountainous area with limited line of sight. With a LEO constellation, though, you’re bound to have repeated opportunities to connect as numerous satellites zip by overhead, although your window of opportunity may be limited to a few minutes at a time.

So what if you’re in an area of poor reception and someone on the other side of the planet desperately needs to contact you? In that case, as your signal waxes and wanes, you’ll receive a pager alert indicating that someone wants you to call. Then you can move to a location with better reception in order to make the connection.

If you’re in a scary, war-riddled country, though, you want to take every precaution and stay alert to danger. Keep reading and you’ll see why in some places using a sat phone can be harmful to your health.