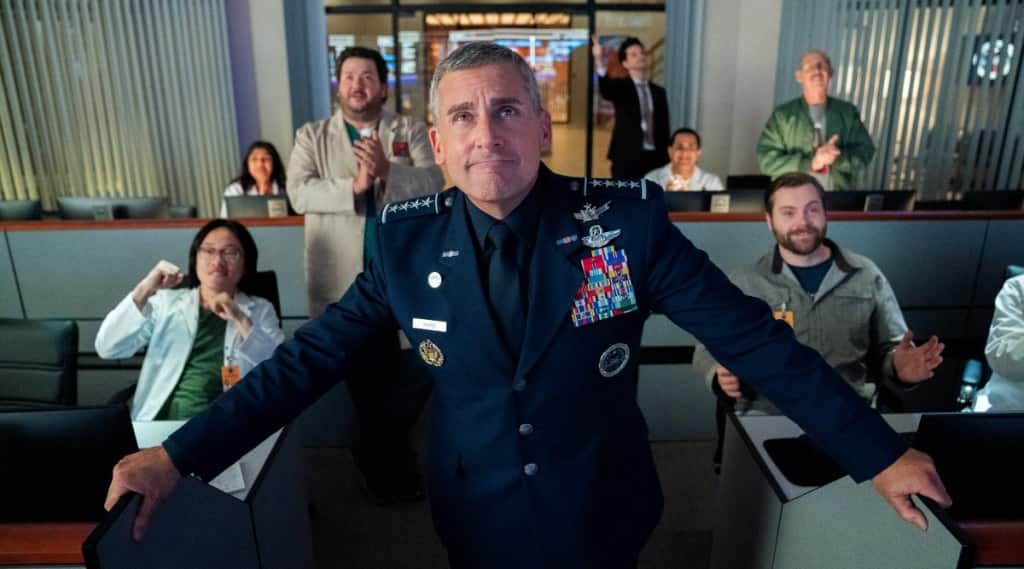 We list some of the pros and cons of Steve Carell starrer Space Force.

Space Force, starring Steve Carell and John Malkovich in key roles, landed on Netflix a few days ago, and the general consensus is that it pales in comparison to The Office.

In the first couple of episodes, Space Force establishes that it is based on a silly premise – the existence of a military branch called Space Force. But in this universe, that silly premise was taken seriously by someone, like the present-day POTUS, and they decided to run with it. We see the show shifting from stupidity to emotional outbursts, and while it tries to serve it all on the same platter, there are a few hits and misses. Here, we list what works and doesn’t work in this Netflix series.

Here’s everything that works in Space Force:

Here’s everything that works for Space Force:

The first episode here is a warm-up session, but its with the second episode that Space Force completely hits it out of the park. The sequence where the chimpanzee is trying to repair a satellite is a masterclass in comedy writing. Just the sheer commitment of taking that sequence forward takes courage, and pulling it off with such precision is brilliant.

The relationship between Carell’s Mark Naird and Malkovich’s Adrian Mallary is the centre of this show. It is their tiffs, disagreements and quarrels that make up for most of the conflict here. From little moments like the one with button covers to the big ones, like the one where Naird suspects Mallary of being a spy – the duo works in perfect harmony. Mallary’s sarcastic and scientific mind is the antidote to Naird’s ‘bomb exploding approach’ for every conflict.

3. Mark Naird is NOT Michael Scott

While the trailer of Space Force hinted that this was another version of Michael Scott, I’m happy to report that this is not the case. Steve Carell makes a big distinction between Scott and Naird, and it is evident from the start. The two characters have been written differently and don’t even have the same vibe when they appear on the screen. The comparisons, of course, arise from the fact that they are in over their heads at their respective jobs.

Just the absurdity of the situation is enough to make you laugh but realising that all of this is, in fact, happening in real life will make you think about the tragedy of our world. References to POTUS, Elizabeth Holmes and many others bring this point home.

1. Less on the laughs

Space Force isn’t as funny as one would have expected, especially coming from Greg Daniels and Steve Carell. After the hilarious second episode, I was expecting more in the following episodes. But somehow, they were not all in the same comedy arena. Sometimes, not even close.

Space Force tries hard to balance Naird’s emotional side with his stupidity at work. But this balance isn’t struck in most episodes. When going dark, the show goes too far (like the lunar habitat sequence), and there isn’t enough relief to bring the viewer back. The show suffers from a major identity crisis as it isn’t sure if it is a workplace sitcom or a satire. In trying to be both, it feels lost.

3. What’s up with Lisa Kudrow’s track?

I imagine that the story behind Maggie’s incarceration will be unfolded in the subsequent seasons, if there are any, but for now, it just seemed off. I’m a firm believer that everything in a story serves a purpose, but I’m yet to find out the purpose of Maggie Naird’s jail term on Space Force.

When I saw Ben Schwartz on the show, I was instantly reminded of his brilliant work as Jean Ralphio on Greg Daniels’ show Parks and Recreation. But here, Schwartz just isn’t given much to play with. Every time he appears on screen, you want more because he is the representative of the lowest common denominator that would clash perfectly with Mallary, and even Naird, but we only see glimpses of it.

The Indian Express is now on Telegram. Click here to join our channel (@indianexpress) and stay updated with the latest headlines

For all the latest Entertainment News, download Indian Express App.