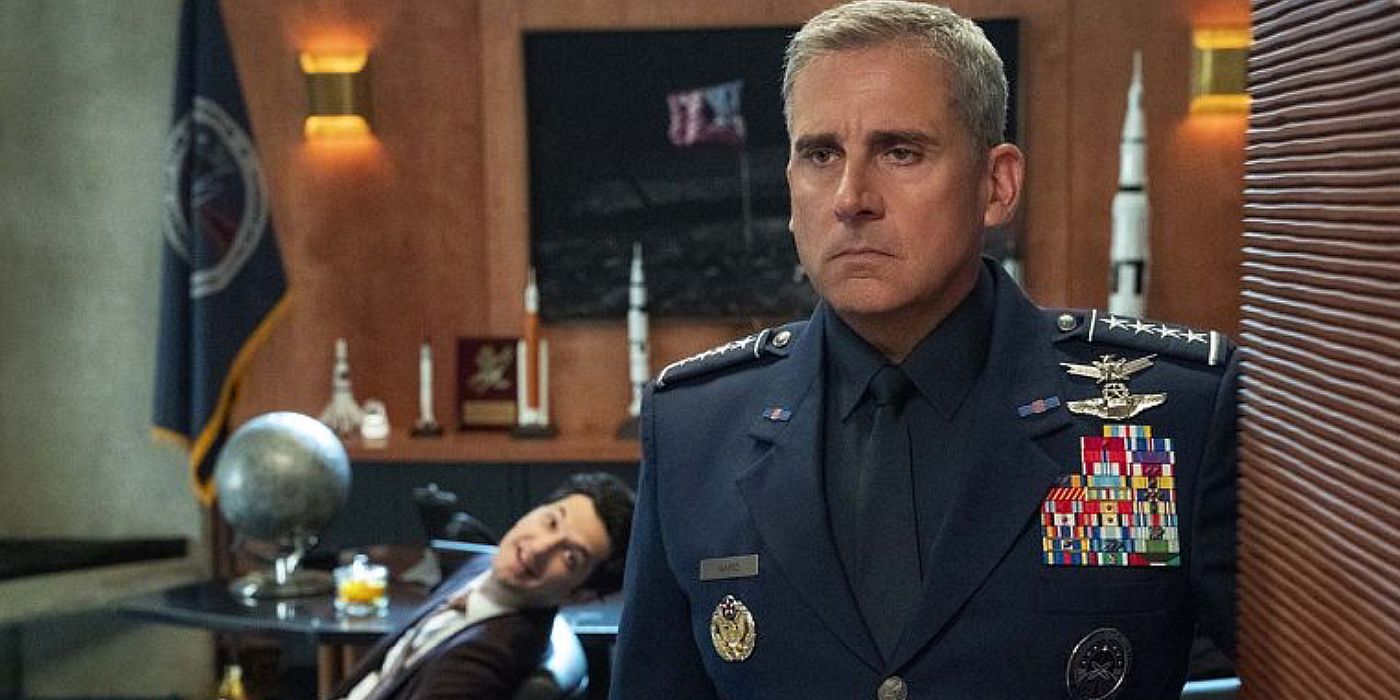 Season 1 of Netflix’s Space Force introduced an ensemble set of characters but it ended with a big cliffhanger. Here’s a breakdown of the conclusion.

The first season of the Netflix series Space Force ended in a cliffhanger for General Naird. The latest series from Greg Daniels and Steve Carell brought comedy, but it also presented interesting social commentary. Carell also starred as the Netflix comedy’s central character, General Mark Naird, the leader of the newest branch of the military forced to make a very difficult decision by the end of the season. Though the series tried to tie up loose ends, many new questions arose before the finale ended on a cliffhanger.

Based on the sixth branch of the U.S. Armed Forces, Space Force followed a 4-star general from the Air Force as he was forced to relocate to a base in Colorado to run an entirely new operation. Since Mark spent his career in the military, there was a major disconnect between him and his scientists, including the team’s lead, Dr. Adrian Mallory (John Malkovich). There was also an extra amount of stress stemming from his home life with an unhappy teenage daughter, Erin (Diana Silvers), and a wife, Maggie (Lisa Kudrow), currently serving decades in prison.

The Space Force’s first handful of missions served as a focus of season 1, as well as the issues they encountered with funding, the administration, and tension among other nations. In time, Mark opened his mind when it came to understanding the scientific side of their missions. He also realized that many government officials weren’t on the same page with the base’s vision. Season 1 then concluded with the main character in the midst of an internal conflict that will have inevitable consequences no matter what he does next.

Why General Naird Disobeyed His Orders

Despite being chosen as the first Chief of Space Operations, General Naird never had full control over the branch. He may have made key decisions when it came to launches and operations but the President and his administration were waiting to jump in the second Mark hesitated in obeying orders. This was presented when the administration turned to the private sector in hiring Edison Jaymes (Kaitlin Olson), the tech guru, to put a better spin on Space Force’s missions. When the Chinese team interfered with the United State’s mission, all bets were off in peacefully occupying the moon.

China already sabotaged the first rocket launch after taking off the panels on Space Force’s satellite. They further hurt relations after using a rover to run over the American flag on the moon. Many military officials and members of the public wanted a swift retaliation. Mark was ordered to send his team on the moon to attack the Chinese base. After much internal debate, Mark realized an attack was not the best option. He explained that people often forget the past and wind up making the same mistakes, like the case with wars. Arrogance wasn’t the way to go, so Chief of Staff of the United States Air Force, General Kick Grabaston (Noah Emmerich), took over, arrested Mark, and forced the team on the moon to obey orders.

What Happened On The Moon

Before Mark was detained by the Air Force, he told the leader of the moon team, Angela Ali (Tawny Newsome), that he would be defying the orders. He also instructed the group to disassemble the guns and use the parts as other resources. When Grabaston took over the control room, the team no longer had weapons, so he encouraged them to gather wrenches. They then took two rovers and traveled to the Chinese base where they passed their inhabitants along the way.

Related: Why Space Force’s Reviews Are So Mixed

After successfully destroying the Chinese base by making it uninhabitable, the American Space Force hub expected to take in the Chinese astronauts as refugees. They happened to pass the Chinese team on the way back from their attack when they realized that the other group made a subsequent attack. The Space Force habitat was destroyed and the team was left wondering what to do next. Grabaston is certainly not the person to handle the scientific side of the situation. To make matters worse, head scientist Dr. Mallory was also detained. It was unclear if the rocket still functioned, but it’s likely that the team didn’t have the fuel or supplies to make it back to Earth.

Why Maggie Escaped From Prison (& Will She Keep Running?)

While Mark was making the most difficult decision of his career, his teenage daughter was off making other tough choices. After feeling disconnected from her family, Erin made the irresponsible choice to get in a car with three male strangers. They drove her out to the desert to a sketchy property full of people doing drugs. Erin called her father for help, but since he was detained, she turned to Maggie. Of course, as her mother, Maggie wanted to help, but there wasn’t much she could do from jail. That didn’t turn out to be entirely true shortly thereafter.

Mark wound up breaking free from the restraints and escaping from the base in a helicopter. He rescued Erin just in time and the two witnessed a figure running in a field while wearing an orange jumpsuit. The figure turned out to be Maggie who escaped from jail with the help of the prison guard (and new lover), Louise. Maggie wanted to help Erin, but she didn’t seem to think beyond that step. Since Maggie went out of her way to escape, it’s unlikely that she will willingly go back to prison, especially since Louise will also get in trouble, ending the chance of their relationship. It will be interesting to see if Maggie remains on the run and if her family will help protect her freedom.

What’s Next For General Naird And His Team

Mark never envisioned becoming the leader of the Space Force after he was made a 4-star general. He did what he had to do, but didn’t have many opportunities to follow his own voice. Mark did his part in defying an order which could be viewed as a war crime. But instead of running from the situation, Mark was put in a tough situation once his team on the moon was put in harm’s way. As Brad (Don Lake) indicated, Mark was given the choice of running or returning to assist, which would end up in the man being court-martialed. As he pondered the options, it looked as though Mark turned the helicopter around. Based on Mark’s morals and his past in the military, it’s unlikely that he will leave his team behind. That goes for his allies on the base and those on the moon. At the same time, Mark will make sure that Maggie and Erin are safe before making any further decisions.

Related: The Most Anticipated New TV Shows Of 2020

As a whole, Space Force was a satire poking fun the real-life branch of the military. There were many jokes aimed at government officials on both sides, but it predominantly pointed indirectly at the President and his administration. On a deeper level, the Netflix comedy focused on a man that had always played by the rules as a straight-laced general. When the time came, he recognized that military actions weren’t always the answer in global conflicts. He referenced that past wars are often forgotten before repeated mistakes are made. He didn’t want to make another disastrous mistake that could hinder the base’s missions for years to come.

The series also touched on why the scientific side of space missions is so crucial, as indicated by Dr. Mallory’s constant fight. He tried to persuade Mark about the importance of funding and how science can better the future. Though the series took this debate through a comical tone, there was a clear message presented through Space Force that many key leaders don’t take scientific research seriously enough. Space Force season 2 will surely continue these themes as it follows the next chapter of Mark and the base.

Next: Netflix’s Space Force Cast Guide: Where You’ve Seen The Actors Before