Co-created by Steve Carell and Greg Daniels, “Space Force,” launching Friday on Netflix, reunites the star of “The Office” with the man who developed it from the U.K. original. Daniels went on to co-create the great “Parks and Recreation” and create the really quite good “Upload,” now streaming on Amazon Prime; Carell became a movie star. Yet “Space Force,” for all the talent it enlists, is less a guided missile than a splattering of buckshot. Some of it hits the target. More of it goes astray.

Carell plays Gen. Mark Naird, newly promoted from three to four stars and expecting to command the Air Force. Instead, to satisfy the whim of a never-named president who is clearly Donald Trump, he is put in charge of creating a Space Force, a job at which he first snorts, then embraces.

“POTUS wants boots on the moon by 2024,” says the secretary of Defense. (“Actually, he said ‘boobs on the moon,’ but we believe that to be a typo.”) The president also wants to go to space to protect the internet and Twitter — a little ironic, given recent developments — because… something something satellites. (To return to the unreal real world for another second, Trump recently unveiled his actual Space Force flag and touted the development of a “super-duper missile.” The parody is self-service.)

The assignment plops Mark, his unhappy teenage daughter, Erin (Diana Silvers), and his wife, Maggie (Lisa Kudrow), in a remote corner of Colorado. In a sprawling, not-very-secret secret base, scientists huddle over consoles and troops march by chanting, “I don’t know but I’ve been told/Outer space is very cold.” John Malkovich, muttering like John Malkovich, plays Dr. Adrian Mallory, in charge of the science portion of the program and almost always at loggerheads with Mark. 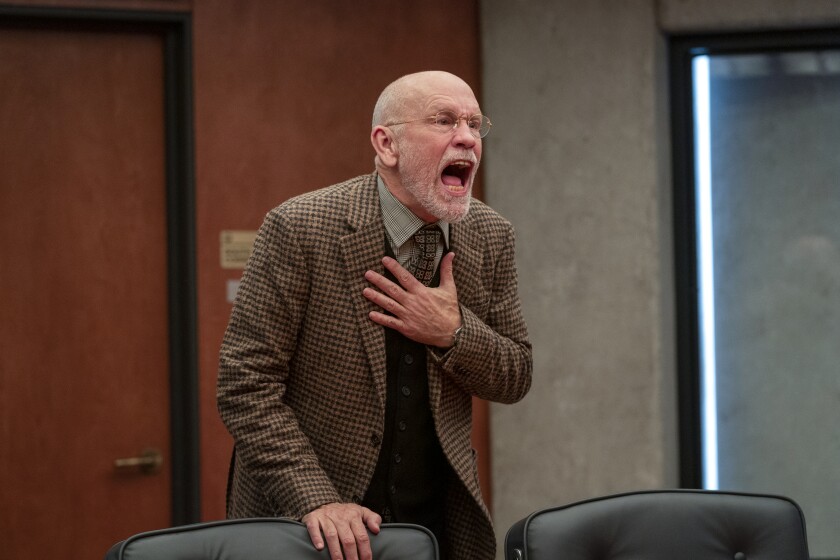 John Malkovich has a trying moment as Dr. Adrian Mallory in the Netflix comedy “Space Force.”

“As a scientist, you have a loyalty to reason,” Mark says to Mallory. “It makes you a little untrustworthy.”

“You were right about the launch,” Mallory says to Mark, who fired a rocket over his objections, “but you know nothing of science.”

But who will have whose back when it matters most to the story arc? I think you know.

Kudrow spends most of the season in a situation Netflix wants kept secret, as if it were a spoiler — though it hardly spoils anything, since it’s revealed 18 minutes into the first episode and is not ever accounted for either by explanation or anything we can divine from her character. Indeed, it seems to have been engineered simply to make Mark function as a distracted single dad and to give Erin extra room to act out, and I suppose they thought it would be funnier if they gave no reason for it, or else they just couldn’t come up with a good one. (The series originated with Netflix pitching the title to Carell, who called Daniels; the two worked out a story from there, and some of it does seem to have been walked in backward.) When Kudrow does appear, which is not often enough, she creates a little sphere of reality that humanizes whomever she’s with. (As eccentric as they made her, Phoebe was always the most believable character on “Friends.”)

Carell has opted to play Mark partially in a gruff military voice; words seem to escape him in bursts of air, as if to symbolize his psychological repression. (“I know you’re not the most flexible person,” Maggie says. “I can be flexible if I’m ordered to be,” Mark responds.) He sings old pop songs to calm his nerves — it’s a character quirk! maybe an insight! — and his taste is not necessarily good. (Then again, we may disagree on “Kokomo.”) At other times, as when helping his daughter with her math homework, or in scenes with Kudrow, or whenever he’s out of uniform, his tone becomes more human. 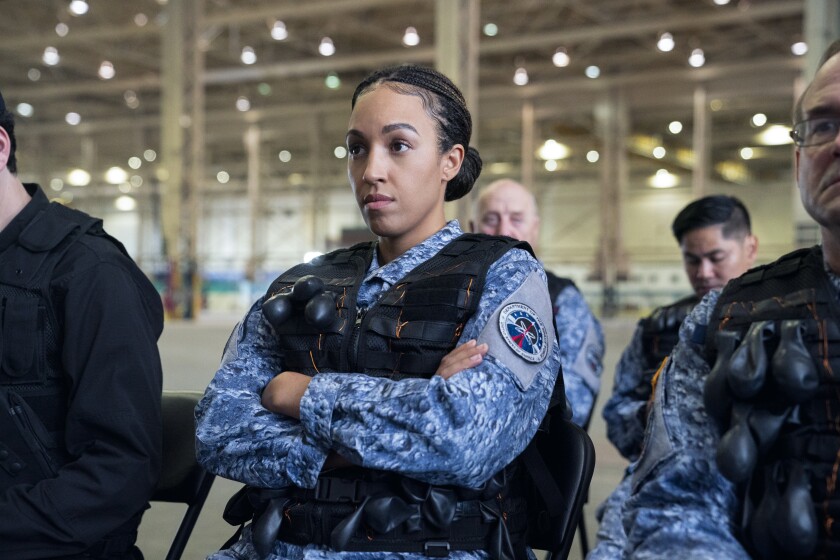 Tawny Newsome is a helicopter pilot with her eye on the moon in the Netflix comedy “Space Force.”

These more sensitive scenes are often interrupted by some crazy emergency, killing a mood, and even among actors with a relatively generous amount of screen time, few get the opportunity to build a character. And so it becomes difficult to care what becomes of any of them — or the fate of the Space Force itself, for that matter. “The Office” and “Parks and Recreation” managed to be both absurd and moving because the characters were always showing you who they were and how they fit together. “Space Force” remains opaque and obvious and unconvincing. It is a contraption, and just what it is meant to produce is never quite clear. Its tones never mesh; its personality remains split.

Accordingly, many of the characters that register best are the ones that don’t have to carry a lot of narrative weight, that embody a comic attitude or a running joke: the one-star general (Don Lake) who is essentially Mark’s receptionist and gofer; Ben Schwartz as an overzealous media consultant; and the late Fred Willard, in two episodes as Mark’s father, suffering from a touch of dementia. Mark’s fellow Joint Chiefs of Staff, various flavors of dopes and bullies, are played by Jane Lynch, Patrick Warburton, Diedrich Bader and Noah Emmerich, as Mark’s former commanding officer and recurrent nemesis, and they score in part because we know them so well. Also notable are Jessica St. Clair as a civilian contractor who keeps crossing paths with Mark and is required only to be a sympathetic normal person; Tawny Newsome as Mark’s driver and helicopter pilot; and Jimmy O. Yang as the astrobotanist she maybe likes.

Carell and Daniels have tried to be satirical without being insulting, mostly to the disadvantage of the satire, which is rarely more biting than the first lady proposing ridiculous new designs for the Space Force uniforms. (“We wanted to make sure that we were being accurate and more than respectful — I would say complimentary — of the military virtues that Steve’s character holds,” Daniels has said.) Still, the creators do regularly insert Meaningful Statements about war and peace and the poor old Earth, signaling that they understand the times demand something more than silliness. “I see billionaires in the news who look at space like it’s where we’re all going to go when we trash this planet. There is no substitute in space for this planet,” Mark tells a congressional panel. Diana Silvers and Steve Carell as daughter and father doing math homework in a scene from “Space Force.”

In the same scene, as if to ensure the appearance of balance, we get both an ancient Southern congressman declaring, “I feel safer knowing that we have satellites that can rain God’s holy hellfire upon our enemies on this majestic, flat Earth of ours,” and a liberal New York congressperson, named Anabela Ysidro-Campos — if you can’t decode that, drop me a line — whose question about the high cost of sending a single orange to the space station allows Mark to respond with an inspirational speech about money and people and honor and dedication.

Lashings of technobabble aside, none of the practical or scientific material in the show seems remotely true or plausible, especially the speed at which things are supposed to happen. The crew hastily assembled to put U.S. boots back on the moon (“Can’t be certain where the boots will actually be made,” says Mark, “maybe Mexico, maybe Portugal — we’re getting bids on the boots”) is made up largely of dunderheads and weirdos. (It is nice to see Chris Gethard among them, though.)

Here, as throughout the series, things will go wrong on the way to going improbably right. As for “Space Force” itself, not so much.

‘Space Force’
Where: Netflix
When: Anytime
Rating: TV-MA (may be unsuitable for children under age 17)