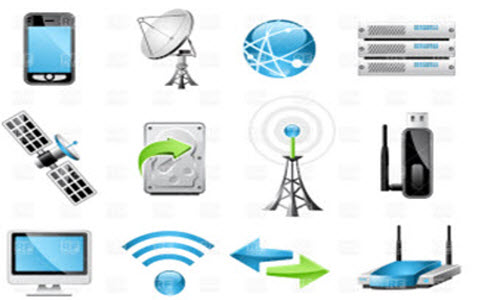 Satellite communication is one type of self contained wireless communication technology, it is widely spread all over the world to allow users to stay connected almost anywhere on the earth. When the signal (a beam of modulated microwave) is sent near the satellite then, satellite amplifies the signal and sent it back to the antenna  receiver which is located on the surface of the earth. Satellite communication contains two main components like the space segment and the ground segment.The ground segment consists of  fixed or mobile transmission, reception and ancillary equipment and the space segment, which mainly is the  satellite itself.

For a successful infrared communication, a photo LED transmitter and a photo diode receptor are required. The LED transmitter transmits the IR signal in the form of non visible light, that is captured and saved by the photoreceptor. So the information between  the source and the target is transferred in this way. The source and destination can be mobile phones, TVs, security systems, laptops etc supports wireless communication.

The first wireless communication technology is the open radio communication to seek out widespread use, and it still serves a purpose nowadays. Handy multichannel radios permit a user to speak over short distances, whereas citizen’s band and maritime radios offer communication services for sailors. Ham radio enthusiasts share data and function emergency communication aids throughout disasters with their powerful broadcasting gear, and can even communicate digital information over the radio frequency spectrum.

Mostly an audio broadcasting service, radio broadcasts sound through the air as radio waves. Radio uses a transmitter which is used to transmit the data in the form of radio waves  to a receiving antenna(Different Types of Antennas). To broadcast common programming, stations are associated  with  the radio N/W’s. The broadcast happens either in simulcast or syndication or both. Radio broadcasting may be done via cable FM, the net and satellites. A broadcast sends information over long distances at up to two megabits/Sec (AM/FM Radio).

Radio waves are electromagnetic signals, that are transmitted by an antenna.These waves have completely different frequency segments, and you will be ready to obtain an audio signal by changing into a frequency segment.

For example, you can take a radio station. When the RJ says you are listening to 92.7 BIG FM, what he really means is that signals are being broadcasted at a frequency of 92.7megahertz, that successively means the transmitter at the station is periodic at a frequency of 92.700,000 Cycles/second.

When you would like to listen to 92.7 BIG FM, all you have to do is tune the radio to just accept that specific frequency and you will receive perfect audio reception.

Microwave wireless communication is an effective type of communication, mainly this transmission uses radio waves, and the wavelengths of radio waves are measured in centimeters. In this communication, the data or information can be transfers using two methods. One is satellite method and another one is terrestrial method.

Wherein satellite method, the data can be transmitted though a satellite, that orbit 22,300 miles above the earth. Stations on the earth send and receive data signals from the satellite with a frequency ranging from 11GHz-14GHz and with a transmission speed of 1Mbps to 10Mbps. In terrestrial method, in which two microwave towers with a clear line of sight between them are used, ensuring no obstacles to disrupt the line of sight. So it is used often for the purpose of privacy. The frequency range of the terrestrial system is typically 4GHz-6GHz and with a transmission speed is usually 1Mbps to 10Mbps.

The main disadvantage of microwave signals is, they can be affected by bad weather, especially rain.

Wi-Fi is a low power wireless communication, that is used by various electronic devices like smart phones, laptops, etc.In  this setup, a router works  as a communication hub wirelessly. These networks allow users to connect only within close proximity to a router. WiFi is very common in networking applications which affords portability wirelessly. These networks need to be protected with passwords for the purpose of security, otherwise it will access by others 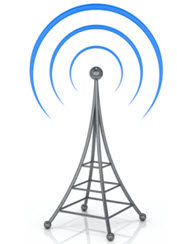 The advancement of mobile networks is enumerated by generations. Many  users communicate across a single frequency band through mobile phones. Cellular and cordless phones are two  examples of devices which make use of wireless signals. Typically, cell phones have a larger range of networks to provide a coverage.But, Cordless phones have a limited range. Similar to GPS devices, some phones make use of signals from satellites to communicate.

The main function of the Bluetooth technology is that permits you to connect a various electronic devices wirelessly to a system for the transferring of data.Cell phones are connected to hands free earphones, mouse, wireless keyboard. By using Bluetooth device the information from one device to another device. This technology has various functions and it is used commonly in the wireless communication market.

Wireless communication based projects mainly include different technologies like Bluetooth, GPS, GSM, RFID and Zigbee projects which are listed below.

Therefore, this is all about Types of wireless communication, these  networks are one of the important technologies in the  telecommunications market. WiFi, WiMax, Bluetooth, Femtocell, 3G and 4G are some of the most important standards of Wireless technology The information which is given in this article will be helpful to the viewers.Furthermore, any queries, suggestions or electronics projects, you can comment us by commenting in the comment section below.

Here is a question for you “What are the Advanced Technologies in Wireless Communication?”