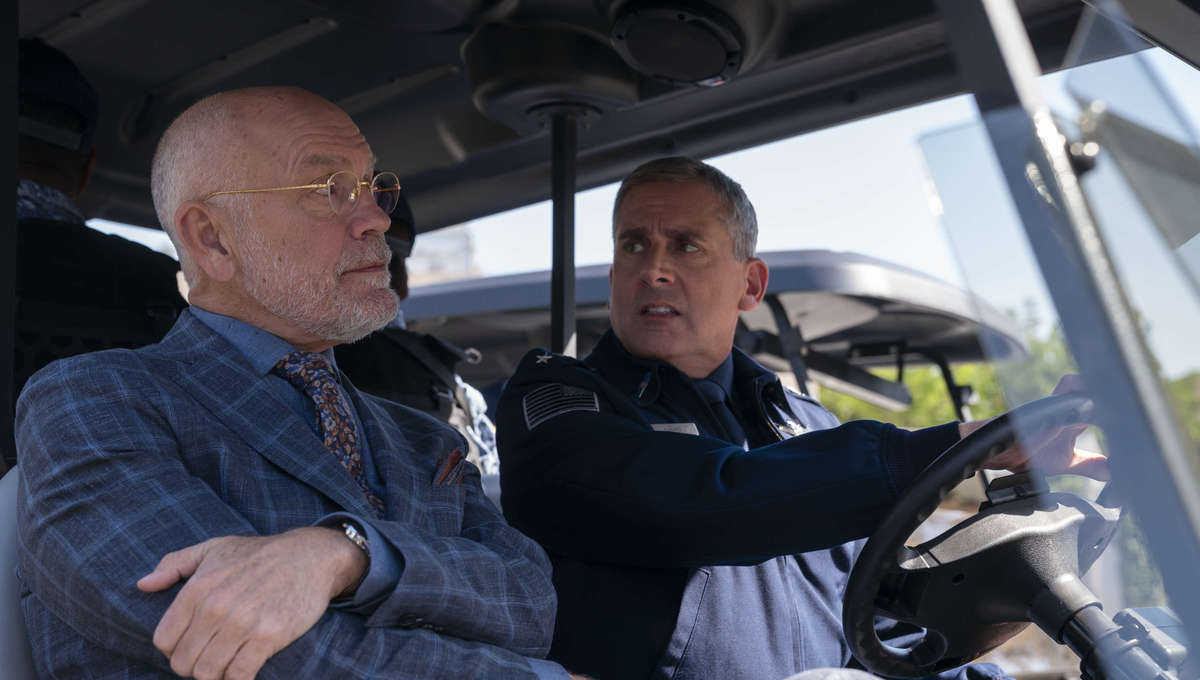 Houston, we may have a bit of a problem with Space Force. The reviews are in for Netflix‘s government satire (created by The Office vets Steve Carell and Greg Daniels), and critics are not floating amongst the stars with ecstasy.

Quite the opposite, in fact — many are grounded, unable to achieve liftoff with a show that seeks to lampoon the newly created sixth branch of the U.S. Armed Services, which is dedicated to conquering the cosmos. And that’s the general consensus here: Despite a great cast, the series’ title is only surface-deep, and the content around it never really feels like a deep enough exploration of the meaty premise.

That’s not to say that everyone thought Space Force crashes and burns. There are a few noteworthy elements critics have homed in on, like the show’s high production values and the always-reliable John Malkovich (playing the titular program’s head science advisor, Dr. Adrian Mallory). In terms of stuff that doesn’t quite work, we have the main character, Carell’s Mark R. Naird, a four-star general who — according to Entertainment Weekly — inexplicably vacillates between “insufferable buffoon” and “good-hearted guy.” Nevertheless, there is some hope that the show can improve on some of its more half-baked elements in a second season if it’s renewed.

The story kicks off when Naird, hoping to be promoted to head of the Air Force, is instead tasked with establishing Space Force. He and his family are relocated to a remote base in Colorado, where all sorts of wacky hijinks ensue with a collection of colorful and diverse characters. Noah Emmerich, Ben Schwartz, Lisa Kudrow, Diana Silvers, Jimmy O. Yang, John Blandsmith, Tawny Newsome, Roy Wood Jr., Don Lake, Jane Lynch, Fred Willard, Patrick Warburton, and Diedrich Bader co-star.

Put on your spacesuit and see what critics are saying below …

“For every glimmer of Carell’s deft timing and empathetic acting, there are several more bewildering character notes that keep Mark, the series’ ostensible anchor, floating out of reach. Given its creative team, it’s not altogether surprising that Space Force is at its best when letting its workplace dysfunction take over.” -Caroline Framke, Variety

“Space Force just isn’t close to consistent — especially in the first half of the season, the misses outweigh the hits — and even as it settles into itself a little more, it’s hard to buy all the eventual smoothing out of characters and plot lines from that choppy beginning. As star-studded, erratic sci-fi satires from spectacularly talented creators go, Space Force has a lot in common with HBO’s maddening Avenue 5. Maybe both shows will work through their kinks by a second season, but don’t go into this first set of Space Force episodes without expecting the rough patches.” -Daniel Fienberg, The Hollywood Reporter

“By far the most enjoyable thing about Space Force is John Malkovich, who drapes his weird and languid charisma over every frame he’s in … The actor is equally exhilarating in Mallory’s more frantic moments, whether screaming about the guy who used to steal his pencils at IBM or barking out the international country code for China.” -Kristen Baldwin, Entertainment Weekly

“Naird’s obstinate, destructive behavior would make Space Force a difficult binge even if all the other elements were perfectly balanced. But too much of it keeps finding new ways to waste the incredible amount of talent and money on display here … it feels like nobody was ever able to go much deeper than [the] title. And even that might have been OK if Carell and Daniels had remembered the rough genesis of Michael Scott from the first time they worked together.” -Alan Sepinwall, Rolling Stone

“Space Force might fall apart without Malkovich. As the well-spoken, well-reasoned foil to Naird’s blunt-talking, ‘when in doubt, drop a bomb’ general, everything from Malkovich’s carefully paced elocution to his subtle reactions work in brilliant comedic contrast to his regular scene partner. Together, Carell and Malkovich forge a charismatic pair that could carry even more episodes than they already do, while Malkovich’s Dr. Mallory could certainly stand for more development on his own.” -Ben Travers, IndieWire

“We’ve been blessed with some truly magnificent TV comedies during the past few years – Fleabag, Atlanta, Barry, and Derry Girls, to name just a few – which makes the job of any newcomer tricky. But while Space Force gives it a good old go, it doesn’t reach those starry heights.” -Abby Robinson, Digital Spy

“Carell is so charming you can’t help rooting for him even when he’s at his most jarheaded. But his character, and in fact most of the characters, could be more sharply defined. There’s a reason we remember Michael Scott, Dwight, Jim, Pam and the rest of The Office‘s workmates: they’re so specific with identifiable traits, wants and frustrations. But after watching the first episode of Space Force, heck, even after the entire first season, it’s hard to know who Carell’s general actually is.” -Richard Trenholm, CNET

“Space Force is delightfully absurd, a comedic light that comes along at the best possible time. The satire throughout is welcome comedy, poking fun at the notion that the United States government aims to convert soldiers into space-faring crimefighters. Admittedly, the parodies are a little too on-the-nose at times, removing the suspension of reality some might expect while they put on a movie or TV series. Even then, that’s something that speaks volumes to the world we live in, rather than to the quality of the programming itself.” -Adam Barnhardt, ComicBook.com