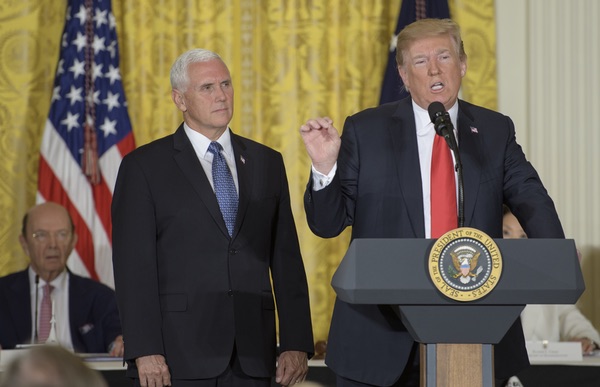 Since the emergence of space law in the second half of the 20th century, deployment of military equipment in outer space has been the subject of intense debates in legal circles. The Outer Space Treaty expressly prohibits the placement of nuclear armament or any other type of weapons of mass destruction in orbit around Earth. Likewise, establishment of military bases or fortifications in space or on celestial bodies has been declared forbidden. This article sheds light on legal dimensions of the Trump Administration’s intention to create new branch of military called the Space Force and examines related legal considerations in light of public international law.

Just what is the Space Force?

On June 18, President Donald Trump announced his intention to create a “space force” that would oversee the US military’s activities off the planet. “When it comes to defending America, it is not enough to merely have an American presence in space,” Trump said at a meeting of the National Space Council, which oversees the nation’s space policy. “We must have American dominance in space. So important.”

“I’m hereby directing the Department of Defense and Pentagon to immediately begin the process necessary to establish a Space Force as the sixth branch of the armed forces. That’s a big statement,” the president continued.

After this announcement, speculation began on the essence and function of the projected new branch of US military force in space and, most importantly and in light of international law, to what extent such a force is permitted and acceptable both by maxims of space law and the political stances of other spacefaring countries.

What is more, United States is a party to the major conventions and agreements collectively comprising the main body of international space law. Accordingly, the government of the US is legally bound to the regulations set forth in legal documents of space law as well as all other relevant and more general rules of public international law such as the Charter on the United Nations, international customary law, and UN Security Council and General Assembly resolutions.

But what exactly is President Trump planning on establishing? There are various interpretations of his statement. Firstly, the prevailing narrative points to consolidating command of the military’s existing satellite systems into a new command hierarchy independent of the US Air Force as it is today. Those include reconnaissance satellites, GPS, missile-warning systems, and communications platforms.

Secondly, it is possible to conjecture that usage of “space dominance” term and reference made to the military force all in all may implicitly lead to actual military presence in outer space which requires deployment of troops or launch of military space vessels into earth orbit or beyond.

Military use of outer space and space law

The Outer Space Treaty is very explicit on the meaning of military use of outer space at the time of ratification and, thus, any legal inference ought to be hinged on narrow textual interpretation of the words within the text of the treaty. Article IV of the treaty reads:

“States Parties to the Treaty undertake not to place in orbit around the earth any objects carrying nuclear weapons or any other kinds of weapons of mass destruction, install such weapons on celestial bodies, or station such weapons in outer space in any other manner.

Hence, following activities are not allowed in Outer Space by signatory states of the Outer Space Treaty:

Of these, so long as any country has adopted or ratified Outer Space Treaty, commission of any of the banned activities specified in Article IV of the Treaty entails serious violations of international law, but with unforeseeable political or diplomatic consequences.

Furthermore, if a hypothetical country that has not adopted the treaty or, later on, has chosen to withdraw from it, commits any of the abovementioned military activities, the matter could be brought to the attention of the Security Council of the United Nations by any other country on the ground of violating undertakings enumerated in the Charter of the United Nations, namely prohibition of endangering international peace and stability through imminent capability for use of military force in resolving diplomatic or economic disputes in outer space. The matter, based on its severity, could be reviewed under chapter VII of the charter by the Security Council. It allows the Council to determine the existence of any threat to the peace, breach of the peace, or act of aggression and to take military or nonmilitary action to restore international peace and security. No spacefaring country desires such a confrontational approach towards the international community and no military or nonmilitary interest justifies challenging the existing international space law by triggering another Star Wars scenario of the Cold War era.

As closing sentences of Article IV of the Outer Space Treaty indicate, the use of military personnel for scientific research or for any other peaceful purposes are permitted. That is to say, armed forces of signatory states to the Treaty can engage in space activities aimed at peaceful exploration of outer space for the sake of the common interest of humankind beyond Earth’s atmosphere.

Article IV states, “The use of any equipment or facility necessary for peaceful exploration of the moon and other celestial bodies shall also not be prohibited.” The clause “any equipment” may clearly include military equipment of any sort but their use in outer space is conditional on both their necessity and peaceful aims.

It is an undeniable fact that most new technologies were at first developed and put in use by military research and development departments of the military forces throughout the 20th century. Take, for example, rocketry that was developed by the Third Reich scientists as a vengeance weapon to turn the tide of the losing war for Germany. It is imaginable that military cutting-edge technologies can find new functions in space that are better than destruction and annihilation on Earth and pave the way for faster, cheaper, and easier exploration of final frontier for the benefit of humankind in the years to come.

The authors of Outer Space Treaty smartly predicted that possibility and, by including exceptions for military presence in Outer Space, kept the door open for conversion of military technology, expertise, and equipment into means of peaceful activities in outer space.

The Security Council of the United Nations has the absolute authority over determining whether any military presence in outer space has met those aforementioned conditions or not. As noted above, in case of established violations, the matter, based on the severity and threats posed to the international peace and stability, could be addressed under chapter VII of the UN Charter. By the same token, the Security Council may allow active military activities in outer space under certain rare but not impossible circumstances that in the following sections will be scrutinized.

One such area is missile defense. Satellites armed with anti-ICBM equipment could in theory reduce the threat of such missiles drastically. However, the scheme is very controversial and, to date, no country has launched such military equipped satellites into the orbit mainly because of concerns about igniting a space arms race and concerns about the violation of international space law and worldwide political condemnation.

However, if it turns out that the sole possible measure to defend against unlawful ICBMs or any other attack through outer space is through the placement of armed satellites or military equipment in outer space, then the Security Council of the UN theoretically can allow military use of outer space as the last resort for preservation of international peace and prevention of civilian casualties caused by any threat from beyond the atmosphere. Such permission could be addressed to one or more spacefaring and capable countries to deal with the threat in line with the limits and instructions specified by Security Council respective resolution.

Joint action against near Earth asteroids

Deflection of hazardous near Earth asteroids, potentially preventing destruction on a regional or global scale, would require investment and extensive cooperation among spacefaring countries. Any asteroid deflecting operation may require deployment of nuclear weapons in space to be used against asteroids that are on a collision course with Earth. Any such ought to be directed and permitted by the Security Council such that acting in concert is guaranteed and to ensure that time and money are meticulously budgeted.

Although no country can have any sovereignty claim over space or on celestial bodies, jurisdiction of countries extends to their spaceships, modules, and habitats in space or on the surface of celestial bodies. Here, the general law is based on maritime and air law. According to such laws, on board vessels in international waters or inside airplanes flying over international routes, the laws of the country that registered the vessel or airplane applies, and courts of the country of registration have jurisdiction to enforce their respective national law. In other words, they are considered to be territory of the country it is registered with.

The legal meaning of space settlement and boundaries for extension of national jurisdiction into space are yet to be defined. However, for the time being it can be argued that deployment of law enforcement personnel along with other people inside space habitats, to enforce national laws and general principles of public international law as specified in the Charter of the United Nations, have no clear opposition on part of the international space law. Addressing the matter of military presence inside such settlements could be subject of a new international treaty once the space settlement becomes a reality in the years to come.

Babak Shakouri Hassanabadi has an LL.M in international law.

Note: we are temporarily moderating all comments subcommitted to deal with a surge in spam.