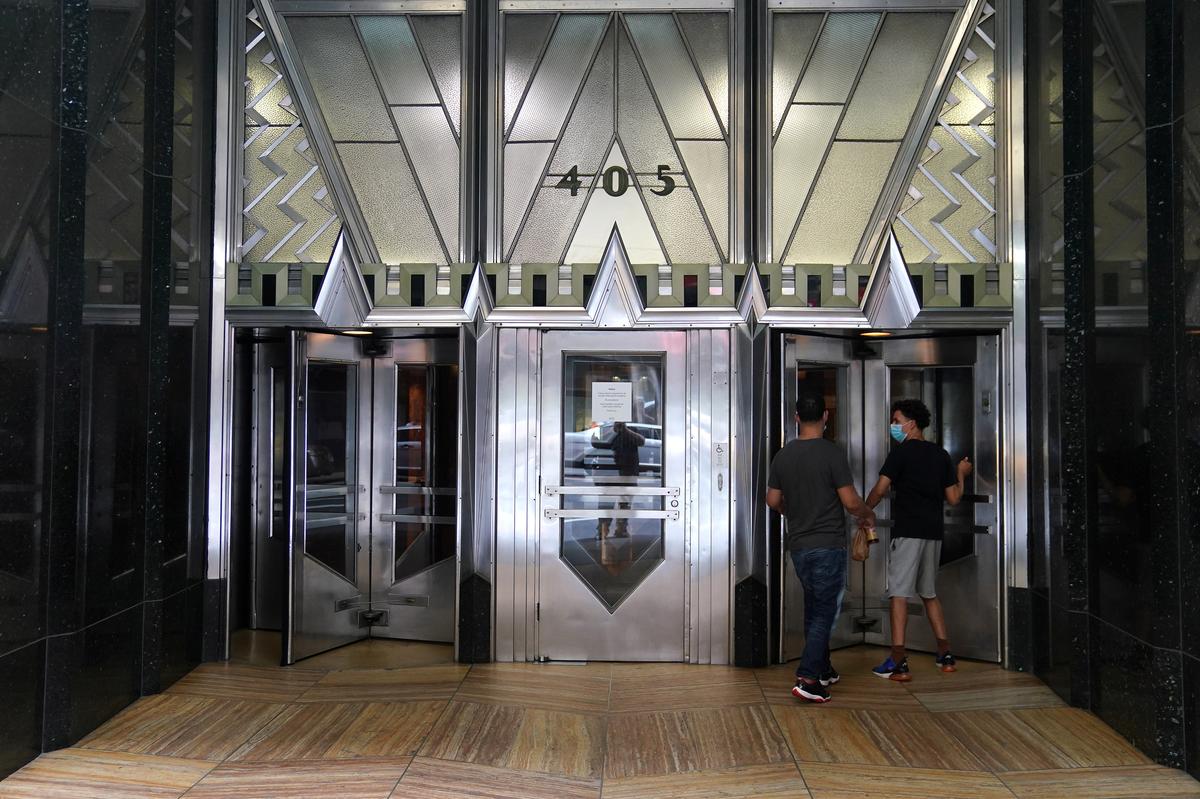 NEW YORK (Reuters) – Corporate America is downsizing its real estate footprint as companies allow more employees to work from home, a growing threat to the bottom line of owners of traditional office buildings and a sign that companies are looking for ways to cut costs as a result of the coronavirus pandemic.

A Reuters analysis of quarterly earnings calls over the past week revealed more than 25 large companies plan to reduce their office space in the year ahead, a move designed to reduce the second-largest expense after payrolls at corporations.

Energy company Halliburton Co said it intends to close more than 100 facilities. Financial services company State Street Corp said it is going to nearly double the workers assigned to one office before adding additional space, based on the assumption that a significant portion of its workforce will continue to work from home even after a vaccine for COVID-19 emerges. Bedding company Sleep Number Corp plans to slow the growth of its total square footage as more consumers shop online.

“You should expect and hold us to a much lower footprint really starting quite soon,” State Street Corp’s CEO, Ronald Philip O’Hanley, said on the company’s July 17 earnings call.

Regions Financial Corp, meanwhile, told analysts: “Whether through increased use of hoteling, work from home or modified scheduling, we are confident overall office square footage will continue to decline,” as some workers share desks or stop coming into the building.

Analysts say the plans to cut back on real estate are likely the first wave of cost-cutting measures to hit office workers as companies try to maintain margins going into what may be a long recession. So far, the majority of the 14.7 million U.S. jobs lost during the pandemic have been in hard-hit areas such as restaurants, travel and retailers.

Reductions in office spending could likely be followed by layoffs and investments in technology that should help improve productivity with a reduced workforce, said Bill McMahon, chief investment officer of active equity strategies at Charles Schwab.

“Clearly, we’re seeing businesses starting to rationalize their physical plants and at some point they will turn to labor too,” he said.

Morgan Stanley in June forecast that work-from-home policies will increase vacancy rates in office buildings. Vacancy rates in New York will reach 10%-12% in the next two to five years from 8.7% now, while San Francisco will reach 7-9% from 5.8%, it predicted.

So far, concerns about declining office space use have not hurt commercial mortgaged-backed securities, with the iShares CMBS ETF up 4.4% for the year to date.

While companies tend to cut back on their real estate needs during typical recessions, the last four months of economic lockdown have shown that many workers can remain productive at home, said Danny Ismail, an analyst at independent research firm Green Street Advisors. As a result, the cutbacks that companies are making are more likely to be permanent, he said.

“Every company just went through a mass work-from-home experience and for the majority it was mostly positive,” he said.

Green Street Advisors expects that office demand will be reduced by up to 15% as a result of work from home policies once the coronavirus pandemic is contained.

That reduction in necessary space will most likely hurt real estate investment firms with large exposures in cities such as San Francisco and New York as workers are expected to be given more freedom by employers to live in lower-cost areas away from the coasts, Ismail said.

“Even before COVID-19, you’d seen a migration from majority coastal cities along the Northeast and West Coast to Sun Belt markets,” he said, referring to the region stretching from Florida to Southern California, collectively known as the Sun Belt. “We think that will accelerate in the future as the cost of living, quality of life and ability to keep your job is much better in a post-COVID-19 world than before.”

(Corrects to say that office demand will be reduced by up to 15%, instead of that up to 15% of U.S. office workers will likely remain remote, paragraph 13.)